The Dodgers did something unusual last night 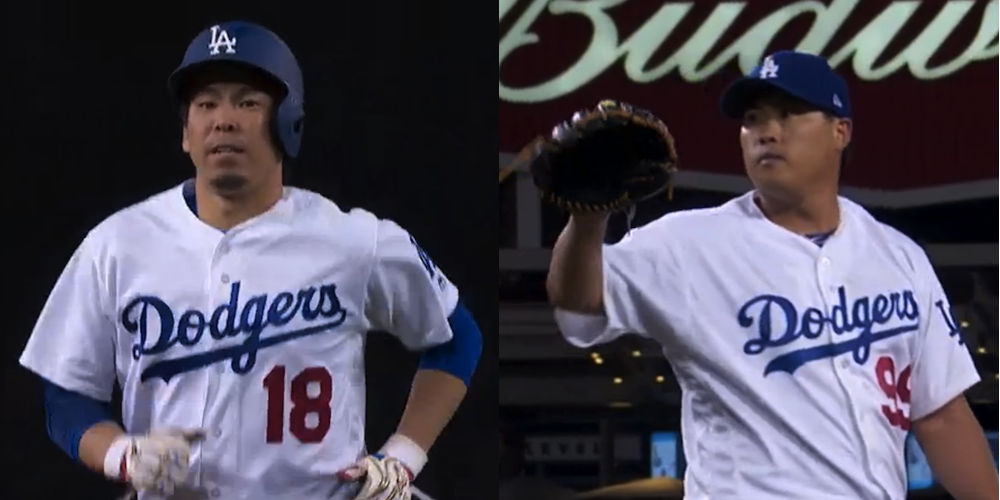 In last night’s victory over the Cardinals, Kenta Maeda pitched five innings, allowing three runs on seven hits and two walks. When he came out after just 78 pitches, Hyun-Jin Ryu entered to make his first-ever MLB relief appearance. He proceeded to deliver four scoreless innings, notching a save.

When Ryu got that final out, it capped off sort of a rare feat: multiple Asian-born pitchers combining to complete an MLB game. Just how many times has this been done before, though?

In MLB history, there have been just 106 Asian-born players. Per Baseball Almanac, Japan tops the list with 63 players who have made it to the majors; per Baseball-Reference, 46 have been pitchers (or have, at least, pitched in MLB — Ichiro Suzuki‘s one inning pitched qualifies him for this list). South Korea is in second place, with 22 players (14 pitchers). Taiwan comes in third, with 12 players (nine pitchers). That leaves nine players who came from other Asian countries (Afghanistan, China, Indonesia, Philippines, Saudi Arabia, Singapore, South Vietnam); six of them were pitchers.

As far as I can find, including last night, just eight times in MLB history has a game featured multiple Asian-born — and only Asian-born — pitchers (this, of course, excludes complete games by a single pitcher). Interestingly enough, every time, it’s been done by the Dodgers. I’ll be honest, Brim (and a few other folks from Twitter) did a lot of the work with helping me find games, and I’ve credited them thusly. Now, let’s take a look at those games:

In what appears to be the first-ever occurrence of an entirely Asian-born staff combining to complete a game, Hideo Nomo pitched 6.2 innings, allowing two runs on four hits and three walks while striking out nine. Chan Ho Park entered in relief with two outs in the seventh inning, and proceeded to hold the Astros to just one hit for the remainder of the game. However, the Dodger bats were kept relatively silent by Astros starter Darryl Kile, and they lost, 2-1.

Kazuhisa Ishii started this one, and pitched 7.1 innings of two-run ball, giving up seven hits and a walk while striking out six. Masao Kida relieved Ishii with one out in the eighth inning, and finished the game, allowing just one hit in his 1.2 IP.

In the first of five instances of this in 2008, Park went four innings, allowing two runs (one earned) on three hits and two walks while striking out three. Hung-Chih Kuo then pitched four scoreless innings, striking out four Angels while allowing four hits. Takashi Saito pitched the ninth, and gave up a run on two hits.

In this Dodger victory over the Reds, Hiroki Kuroda delivered eight innings of two-run ball, giving up five hits and two walks while striking out three. Saito then struck out one in a scoreless ninth inning.

This Kuroda start went a bit better than the aforementioned one, as he pitched 7.1 innings and allowed just one run on four hits while striking out six. Kuo gave up a run on a hit and a walk in his 1.1 IP, while also striking out two. Park came in with two outs in the ninth, and got the save by inducing a groundout.

This was yet another Kuroda start. This time, he pitched seven innings, allowing one run on two hits and striking out seven. Kuo pitched the final two innings, and he held the Phillies scoreless, striking out two and walking one.

While I’m pretty sure that’s all of them, it’s possible I missed a couple — and if you know of one I missed, please share!

In any event, it’s clear that this is something that doesn’t happen very often. However, we just might see it again this year:

Sarah Wexler is a native Angeleno and longtime Dodger fan. She began blogging about baseball in 2012 on her Tumblr, New Grass On The Field, where she covered an array of topics but especially enjoyed exploring baseball history. She is now a reporter/producer for MLB.com. She earned her master's degree in Sports Management from Cal State Long Beach. She graduated from New York University in 2014 with a bachelor's in History and a minor in American Studies. She's an avid Springsteen fan, which is a big boost to her baseball writer cred.
@sarahwexler32
Previous Dodgers 7, Cardinals 3: Chris Taylor is unstoppable & Hyun-Jin Ryu excels in relief
Next Cubs @ Dodgers May 26, 2017: Wood vs. Arrieta