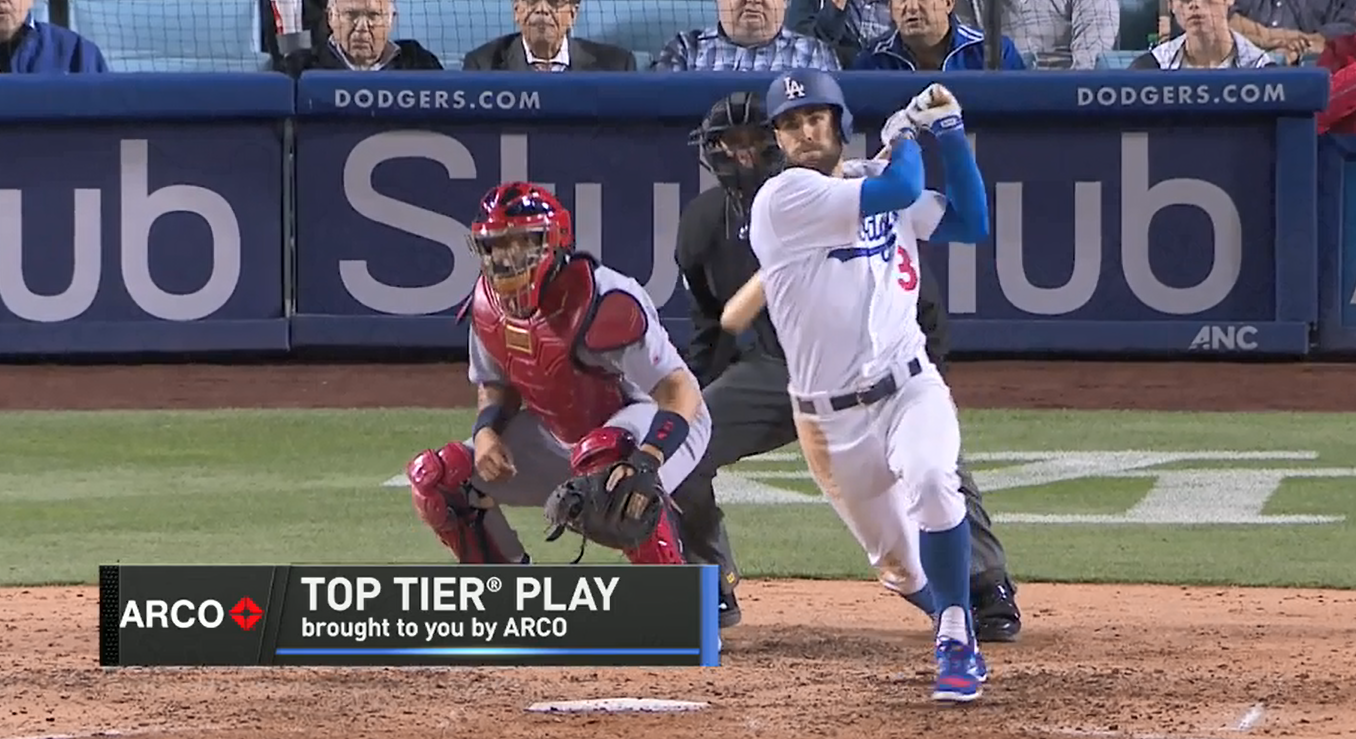 With a 7-3 win over the Cardinals tonight, the Dodgers have greeted the brutal section of their schedule with a series win, much thanks to Chris Taylor‘s continued hot hitting, Kenta Maeda settling down eventually, and Hyun-Jin Ryu looking impressive in relief.

Maeda made his return from the 10-day DL and he certainly looked like he was shaking off rust early. His command was off as he fell behind frequently and gave up three runs in the first inning, but thankfully he looked healthy otherwise and settled down as the game moved on. In the end, he made it through five innings on just 78 pitches and didn’t allow another run, pitching around seven hits and two walks while striking out four.

Being in a 3-run hole in this series felt insurmountable the way the offense was going, but thankfully they turned it on tonight against a resurgent Michael Wacha. The Dodgers got on the board in the 2nd behind … well, a Chase Utley homer.

Yes, this is real life.

The Dodgers put up a crooked number in the fourth, with Cody Bellinger notching a one-out single, and then Enrique Hernandez coming through with a two-out single to put runners on the corners. Yasiel Puig then came through with arguably the most important hit of the game, bouncing a single the other way to drive in a run.

Dave Roberts then decided to let Maeda hit for himself, and after Puig stole second, Maeda came through by bouncing a hit down the line to plate two runs and give the Dodgers the lead.

The fifth brought more runs for the Dodgers, as they quickly started with a Taylor single and Corey Seager walk. In a rare sequence, Yadier Molina then got crossed up to advance the runners, followed promptly by a wild pitch to score Taylor. Later, with one down, Adrian Gonzalez flipped a double down the line in left to drive in another.

The sixth marked the third consecutive inning the Dodgers scored, this time behind a leadoff double for Enrique, and then a two-out double from NL MVP CT3.

That was more than enough support, because Ryu made his MLB debut as a reliever and the experiment went about as well as could be expected. Ryu was able to stay away from throwing too many four-seamers and instead attacked hitters with changeups and curves to great success.

So successful was the experiment that Ryu ended up getting the save after pitching 4 shutout innings on 51 pitches. Ryu allowed just two hits and one walk while striking out two, inducing eight grounders and a lot of weak contact.

Ryu definitely and understandably wants to start, but this could be a role he excels in.

The victory moves the Dodgers to 28-20 on the year and 18-8 at Chavez Ravine. Most importantly, you’re now less than a week away from me stressing you out with standings updates in these recaps.

"A highly rational Internet troll." - Los Angeles Times
@ChadMoriyama
Previous Cardinals @ Dodgers May 25, 2017: Maeda vs. Wacha for the series win
Next The Dodgers did something unusual last night