Dodgers 9, Cardinals 4: Hey, uh, the Dodgers are in first place 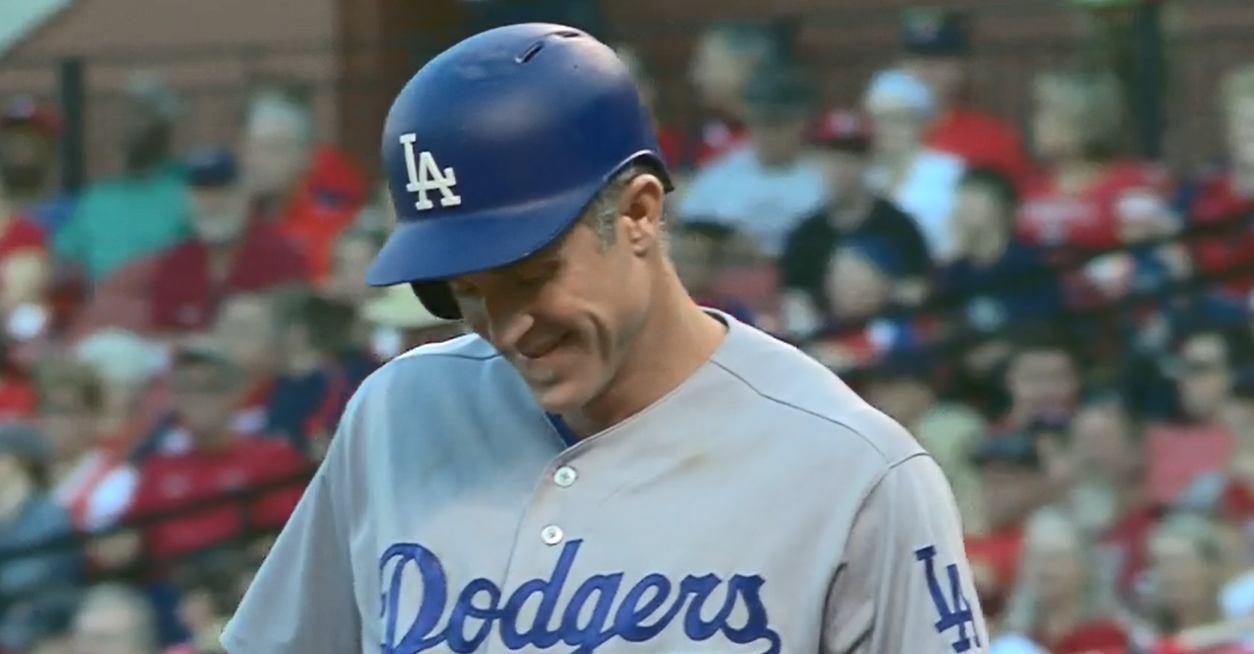 Kenta Maeda faced the Cardinals today for the second time in a row, and I’m guessing he was hoping to get off to a better start than last time when he allowed 3 runs in the 1st inning. Well that hope went out the window quickly, as the beginning to his start sorta mirrored that from last time out.

The Cardinals got on the board early in the first, though that was thanks to a fair bit of fortune. After Dexter Fowler started things with a lined single into right, Tommy Pham walked on what should’ve been a strike three during which a stealing Fowler would’ve gotten thrown out at second for two outs. 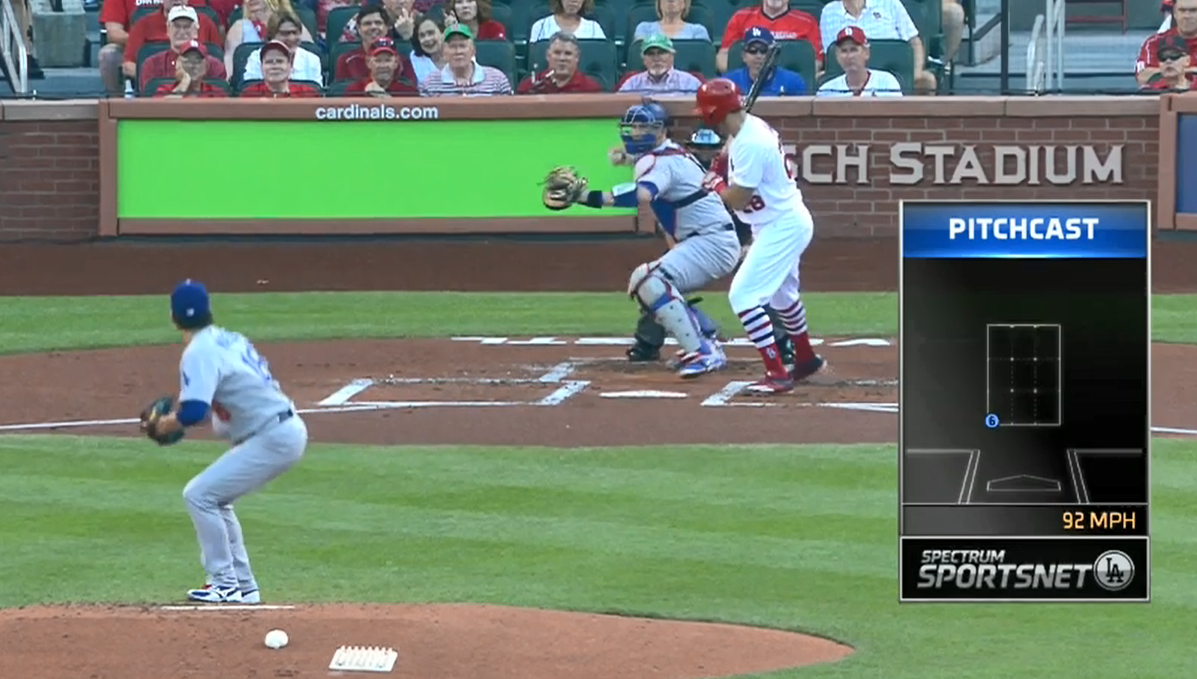 Instead, the Cards had men on first and second with nobody out, and they took advantage of it behind a Matt Carpenter bloop single off the end of his bat into center at a whopping 79 mph. Of course Fowler was going to hold at third, but Chris Taylor threw it halfway between third and home to allow Fowler to score. Compounding the problem, Maeda tried to get Fowler at home after backing up the play, but threw just as Fowler was arriving to the plate and the ball got by Grandal (and he took a shot from Fowler for good measure) to advance the runners to second and third.

Because that wasn’t enough mess, Yadier Molina cashed that in by hitting a rolling ball up the middle at 80 mph just out of the reach of Chase Utley to plate two more. Despite a failed double play turn and a passed ball following that, the Dodgers managed to escape with just that mess on their hands.

Maeda showed some toughness by not allowing a run the rest of the way just like last time, though this time around he made it just 4 innings on 82 pitches. For the most part, his start was hampered by bad luck on soft contact, but he can take the blame for not missing enough bats and making that contact possible in the first place. Maeda gave up the 3 runs on 4 hits and 3 walks, striking out 2 batters.

Fortunately, the offense fought back just like in Maeda’s last start as well, and in the 3rd inning they ended up taking the lead. A Logan Forsythe lead-off walk, a one-out Yasmani Grandal single to put runners on the corners, and an Adrian Gonzalez sacrifice fly to left got the Dodgers on the board. Taylor followed with a two-out walk, and then Utley came through with a ground-rule double down the line to drive in a run.

While the ball bounding over the wall actually cost the Dodgers a run, Enrique Hernandez made sure it didn’t matter when he singled up the middle to plate two (with the help of a throwing error).

So that gave the Dodgers the lead, but they weren’t done yet as they tacked on insurance in the 5th inning, mostly through the incompetence of the umpires and Cardinals pitchers.

With one down, Taylor singled to left and Utley followed by leaning into a pitch and getting hit. That started the merry-go-round, as Enrique then walked to load the bases and Yasiel Puig then walked to force home a run. Franklin Gutierrez was then sent up to pinch-hit, and he got very fortunate to avoid both a called strike three and a check-swing strikeout, which led to a walk of his own to force another run home. Forsythe then got completely sawed off, and it was bad enough that they couldn’t turn two, which led to the yet another insurance run crossing the plate.

The bullpen was then tasked with holding a 4-run lead for 5 innings, and they managed to do just that even while throwing some of their worst options out there. Brandon Morrow — who continues to look interesting with a 95-96 mph fastball that touches 99 and a slider with depth at 90-91 mph — had to throw just 9 pitches to get his frame. Sergio Romo then followed and he looked as sharp as he has all season in terms of command for a 1-2-3 frame of his own (you’re welcome).

Adam Liberatore got them over the halfway mark of their goal by getting two outs in the 7th, but he allowed two singles as well and was removed for Pedro Baez with the heart of the order due up. Baez got a strikeout to end any thoughts of a rally, but instead of continuing on with him, Chris Hatcher was brought in, to which I commented:

Dave is trying to end this streak on purpose.

Hatcher, well, he gave up a homer to the first batter he faced in the 8th to break the streak of 24.2 consecutive scoreless innings from the pen. He also gave up a single, but got the inning without much threat and without further damage.

So it finally looked like Kenley Jansen might get a save chance, but the Dodgers trolled him again behind three consecutive singles from A-Gon, Taylor, and Utley, and then an insurance run on a sac fly by Enrique to get the lead back up to 4. But they weren’t done, as with two down, Austin Barnes entered and smacked a double into left-center to score a run and drive the lead to 5.

The offense ended up scoring 9 runs on 11 hits and 8 walks, as they continue their torrid run.

Anyway, that finally brought in Kenley since he warmed up already, and he got a strikeout and sawed off two guys to take care of business in just 8 pitches.

The most important thing today. pic.twitter.com/itQ1Z6xWUf

Chase Utley on getting hit by pitches: "Do I like it? I mean, I don't dislike it."

Sorry for not giving you any save opportunities @kenleyjansen74 #WeLoveYou

They’ll try to make sure that lead isn’t temporary against the Cardinals again tomorrow at 2:15 PM HST/5:15 PM PST/8:15 PM EST, in what will be their toughest matchup of the series. With Alex Wood on the DL, the Dodgers will turn to Hyun-Jin Ryu (4.28 ERA/5.28 FIP/5.73 DRA), last seen in relief. Carlos Martinez (3.32 ERA/3.70 FIP/2.34 DRA) will go for the Cards, and while he has gotten good results, he’s pitching like a true ace this year. What was once a potential pitching duel has turned into a mismatch, but hey, baseball happens sometimes.