Dodgers 10, Brewers 8: Chris Taylor for NL MVP is becoming less of a joke by the day 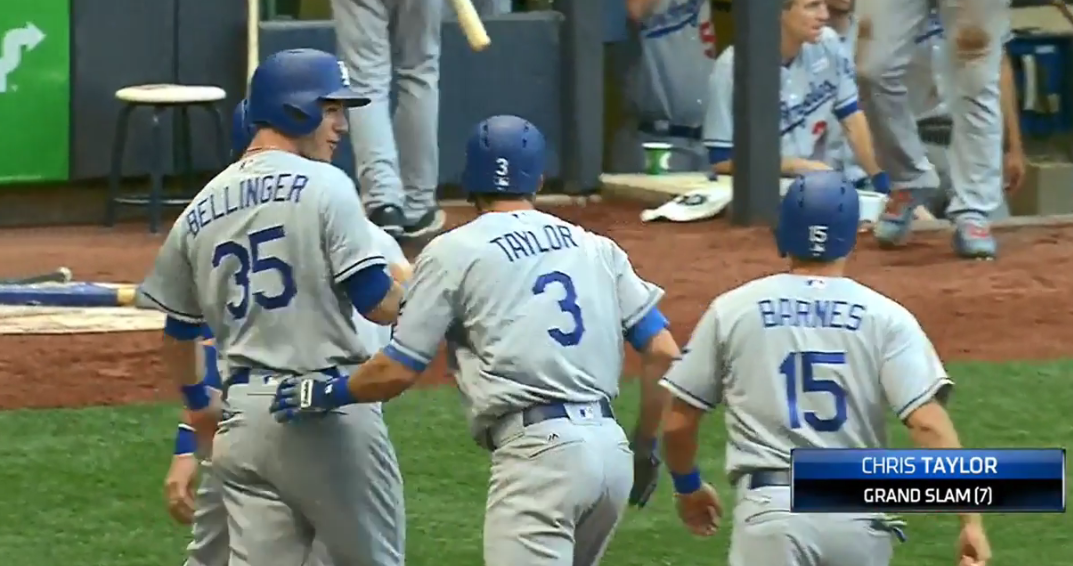 After last night’s dramatic 12-inning victory over the Brewers, the Dodgers were back in action again this afternoon, and the combination of a tired bullpen from that win and Rich Hill not being able to go deep in the game led to the Dodgers trailing big late, but thankfully Chris Taylor is like Baseball Jesus now and the Dodgers won 10-8 in dramatic fashion again.

The Dodgers got off to a quick start, as after a one-out walk by Corey Seager in the 1st inning, Adrian Gonzalez lined a two-out double into center to drive him in to get things going.

They lucked into another run in the 3rd frame, with a one-out single from Chase Utley and a walk from Seager again setting the stage. Yasmani Grandal then hit a ball hard down the line, but it was speared at first and looked like a double play, at least before Brewers starter Matt Garza forgot to catch the ball. That pushed another run over the plate for the Dodgers.

The 4th inning was the frustrating one, as Cody Bellinger reached on an infield single to first, after which Garza seemed shaken by a collision with his first baseman. Bellinger then stole second, and Chris Taylor eventually followed with a walk. Garza, who was clearly not right, then went 3-0 to Enrique Hernandez, but Enrique swung and popped up weakly to second. After a double steal, Yasiel Puig was intentionally walked to load the bases with one out. Hill, who was probably going to get two innings more at most, was allowed to hit and promptly bunted out to second. Following that Utley got ahead 2-0 but then got jammed somehow and grounded out to first to end the threat. 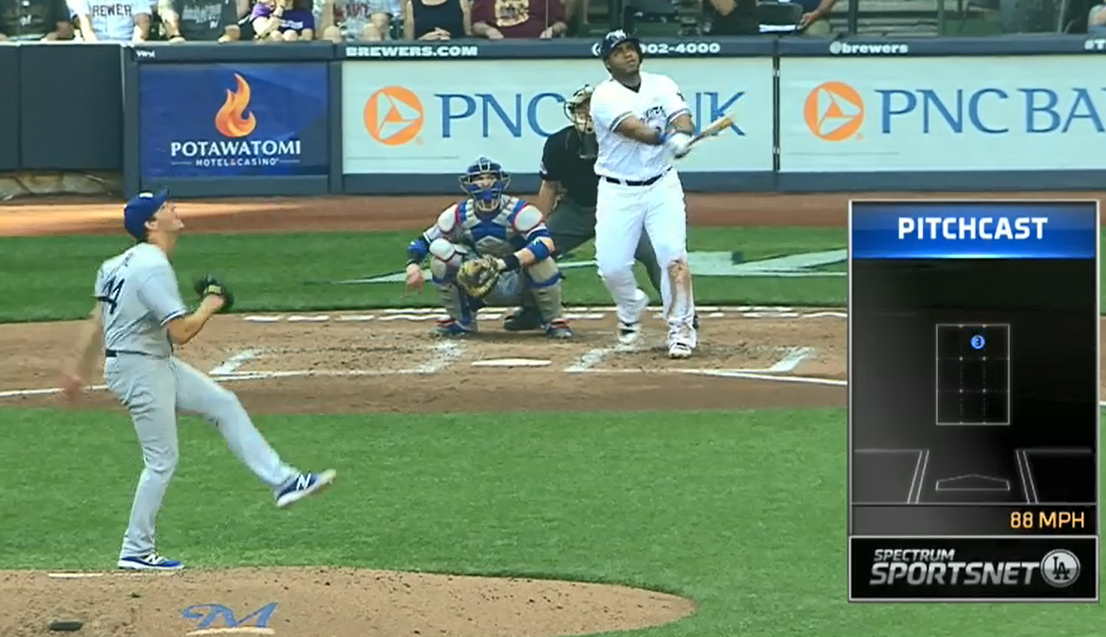 As it turns out, Hill only got one more inning as he continued to struggle with the feel of his curve, which is definitely a concern. He’s had quality starts, of course, but he can’t really be inconsistent with his curve because he has no other off-speed pitch to fall back on if it goes wrong. That leads to things like 97 pitches in 4 innings, along with 4 walks. Again, he’s not getting hit hard all that hard, as they had just 3 hits and he struck out 5, but the 3 runs (only 2 earned) were largely due to the amount of free passes he’s surrendering.

Thankfully the offense continued to fight back in the 6th, as Taylor and Enrique got back-to-back one-out singles to start the rally, and then the Dodgers executed another double steal to get them both into scoring position. A wild pitch and a Puig single later, and the Dodgers had two more runs and the lead.

That still left the bullpen with five innings to get, which was a difficult task given that Pedro Baez and Kenley Jansen both pitched two innings yesterday.

Ross Stripling struck out the side in the 5th, allowing just a single in his inning. After he was pinch-hit for, Chris Hatcher took over and struck out two in a 1-2-3 6th. However, again he was tasked with getting a second inning, and in that inning he got just one out, balked, and walked the bases loaded. Josh Fields was then brought on to get the Dodgers out of trouble, and instead he set the place on fire by giving up a grand slam and then a solo shot before getting out of the 7th. 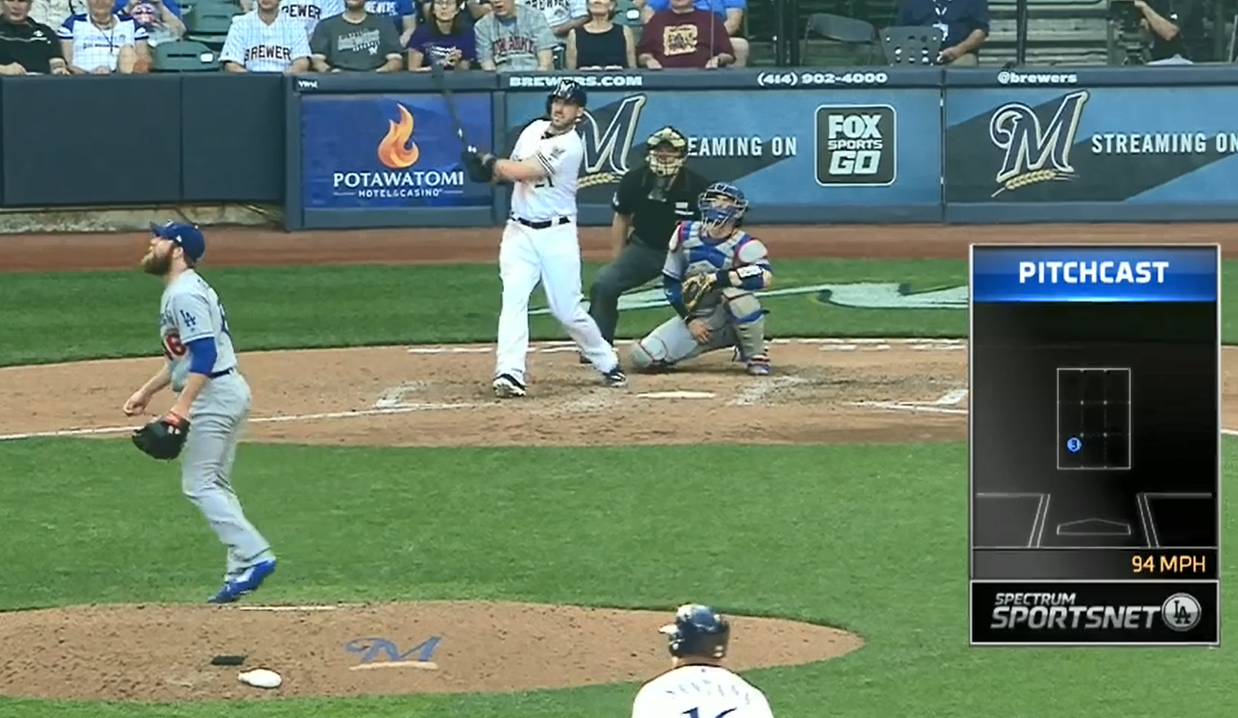 Brandon Morrow got the 8th by striking out the side, and though he allowed a flare single, he continued to look really sharp.

The Dodgers got one back in the 8th after a one-out double by Taylor, which was followed by a wild pitch to move him to third. After Enrique drew a walk, Puig narrowly avoided a double play on a grounder to short to score a run.

They continued to rally in the 9th, and give credit to this team for seemingly never giving up. With one out, Seager walked and Yasmani seemed to ground out, but the first baseman puzzlingly decided to whirl and throw to second instead of taking the out and it hit Seager in the back for an error. Austin Barnes then singled to load the bases, and Cody walked to force in a run. That brought up Taylor, who worked the count back to 2-2 from an 0-2 hole and then absolutely smoked a ball over the center-field wall for a go-ahead, game-winning grand slam.

Kenley Jansen was then brought in for the save even though Dave Roberts said he wasn’t available before the game after going two yesterday.

Gotta say, I understand using Kenley but given the team's mantra of long-term over short-term, I do wonder about it.

I definitely wanted to win, but Kenley being healthy is more important so I had concerns. Amazingly, Kenley came back and allowed just an infield single on a bloop over his head with the infield playing back, getting a scoreless 9th and locking it down.

What the hell is this, Jared Hughes?

The win improves the Dodgers to 35-22 overall and 14-14 away. The Diamondbacks got no-hit today by the Marlins, but the Rockies blew out the Padres, so the Dodgers stay ahead of the Rockies in the NL West by just a half game.

The Dodgers somehow go for the sweep against the Brewers tomorrow, which will be played at the ungodly hour of 8:10 AM HST/11:10 AM PST/2:10 PM PST on a damn Sunday. Yeesh. Kenta Maeda (5.21 ERA/4.26 FIP/4.72 DRA) will be on the hill for the Dodgers, and while he hasn’t allowed more than three runs in his last five outings, he hasn’t been sharp of late either. He’ll matchup with Zach Davies (5.18 ERA/5.31 FIP/6.35 DRA), who is also struggling in 2017 but has been better in his last three starts. With both bullpens sorta toasted by now and both starters not having the best 2017 season, it seems like a high-scoring affair is in order … so 1-0 final score it is.