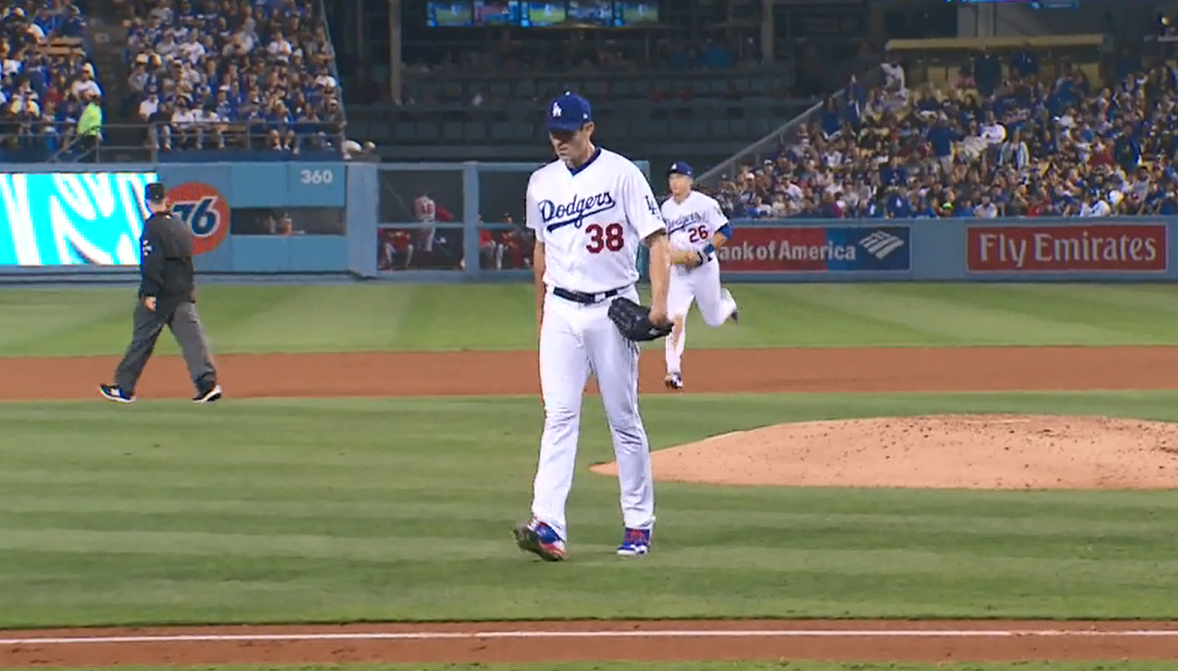 Though it appeared to be somewhat of a mismatch going into the game, Brandon McCarthy and Max Scherzer were engaged in a pitchers’ duel tonight. Unfortunately, after the dust settled following seven innings, the Nationals were up on the Dodgers 2-1, and that score held up to the end.

McCarthy was removed from his last start due to a blister, but he thankfully didn’t show any ill effects tonight. He gave the Dodgers a chance with 7 high-quality innings, limiting the Nationals to just 3 hits and 2 walks while striking out 4 batters.

The Nationals did score 2 runs off him, but even those were mainly of the manufactured variety rather than McCarthy getting hit hard. Washington got off to a quick start in the 1st inning thanks to a high bouncer by Trea Turner to lead off the game for an infield single. Turner than proceeded to steal both second and third, and came home on a sacrifice fly from Bryce Harper. In the 4th they scored off a Harper bloop double that hit the very outer edge of the chalk down the right-field line. McCarthy then got a ground out that moved Harper over, and Daniel Murphy drove him in with a sacrifice fly.

Unfortunately that’s all that was needed as Scherzer was absolutely dominant. He struck out a whopping 14 batters in his 7 innings, allowing just 3 hits and 2 walks, only giving up 1 unearned run on the night.

Amazingly though, the Dodgers had some quality chances. In the 1st, the offense fought back immediately with help from Murphy’s defense, as Chase Utley reached on a single and Corey Seager reached on an error by Murphy. That led to a run after Adrian Gonzalez smoked a one-out single into right.

After that, however, the Dodgers couldn’t get anything else and left runners on first and second. In the 3rd frame, the Dodgers left the bases loaded, and then in the 4th the Dodgers stranded a runner on second.

Out of the Dodgers pen to keep the deficit to one run were Pedro Baez, Grant Dayton, and Chris Hatcher. Baez got a clean 1-2-3 inning with one strikeout, and while Dayton got two outs, he also walked a batter and allowed an infield hit. Hatcher entered to prevent any more damage, and he did just that by getting a harmless infield fly to end the inning.

The problem then was the offense didn’t take advantage of the chances they did get early, and after the 4th inning they didn’t generate any chances to take advantage of (well, they got a runner on second with two outs in the 9th). 4 hits, 2 walks, and 17 strikeouts in a game will do that.

So yeah, when the bats go cold, the recaps get rather depressing.

The most interesting thing the Dodgers did on offense probably came at the end of the game when Yasiel Puig and Koda Glover yelled at each other and whatever dumb shit.

Glover said he didn’t like Puig looking at him, so he yelled at Puig to “get in the fucking dugout” after the strikeout. Puig, who was walking away, then turned to confront Glover, asking him what he said to him. Then there was a brief mess.

The Dodgers drop to 35-25 overall and 21-10 at home. Both the Rockies and Diamondbacks won today, so the Dodgers also fall 2 games behind the Rockies in the NL West and are now tied with the Diamondbacks for second in the division.