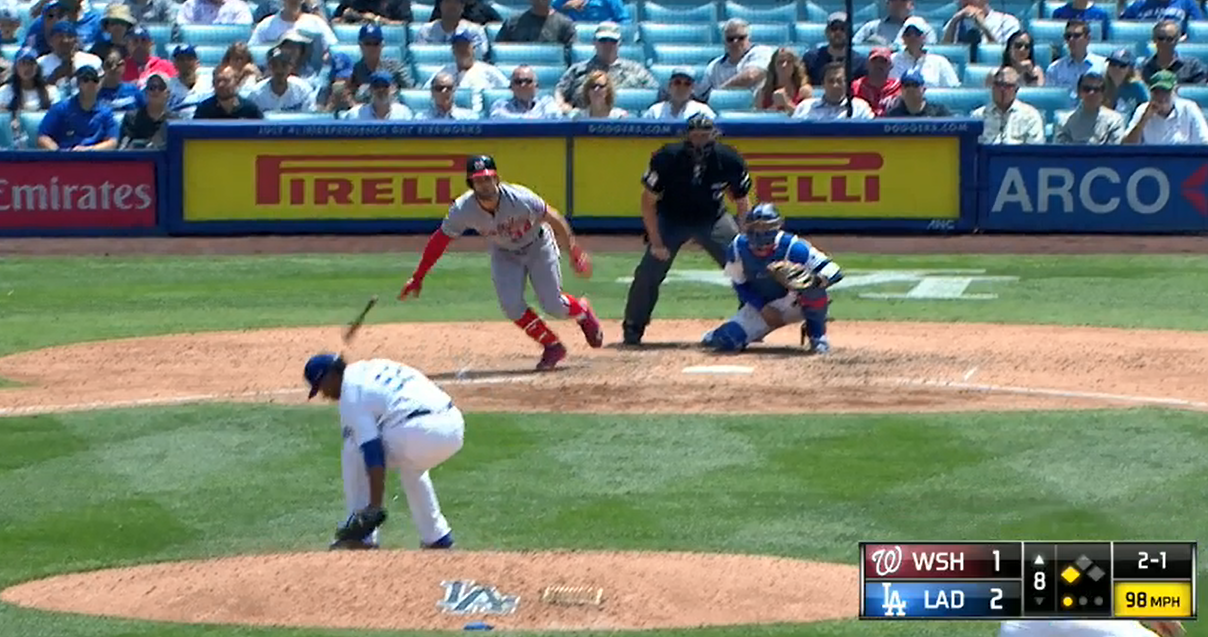 The Dodgers sent ace Clayton Kershaw to the hill in an attempt to avoid a sweep by the Nationals, but after last night’s pitchers’ duel another one was set for today as Stephen Strasburg was the opposition. Thankfully the Dodgers continued to avoid being swept this season with a 2-1 victory thanks to somewhat late rally against Strasburg.

Kershaw lived up to his end of things, going 7 innings and allowing just 3 hits while striking out 9. One of those hits happened to be a solo homer to Ryan Zimmerman, which was responsible for the 1 run he gave up in his outing, but if the batter is going to hit this … well. 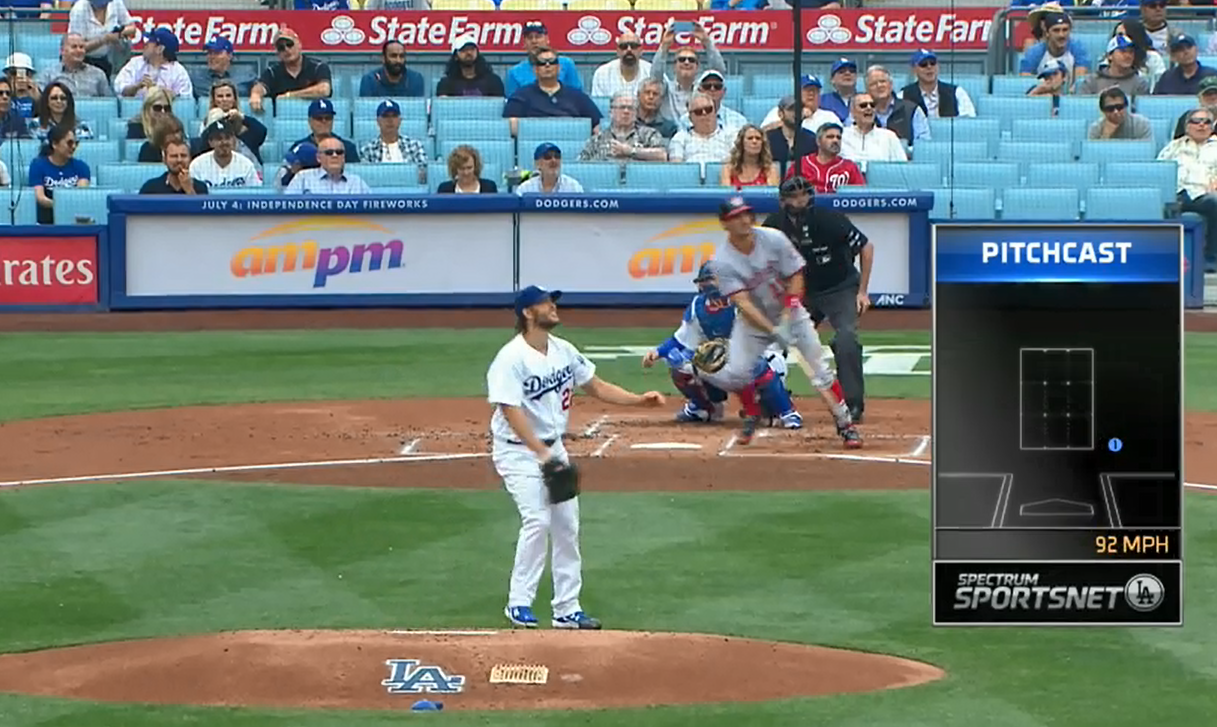 Not sure what you’re supposed to do about that. Tip your cap.

Kershaw wasn’t necessarily at his best throughout, as his control betrayed him at times. He walked 3 batters on the afternoon, including an odd walk of the pitcher, but otherwise the stuff itself looked sharp and much like his normal self.

Dodger bats were dead quiet through 5 innings and it looked like things were setting up to be a replay of last night, but Corey Seager provided a jolt of life in the 6th with a two-out homer to tie things.

Then the Dodgers got lucky, as Adrian Gonzalez followed with a strikeout, but a passed ball allowed him to reach. Then a wild pitch during the Yasmani Grandal at-bat moved him into scoring position, and this time the Dodgers took advantage of the chance as Grandal reached out and plopped a double into a left-center field for the lead.

That was all they got, as the offense was actually worse than last night. Really the best thing they did is drive up Strasburg’s pitch count, leaving him with 104 pitches after 6 and having to be removed. For the game, they got just 3 hits and 1 walk, but the timing and runs are all that matter, and they managed to scratch 2 across.

Rewinding a bit, Kershaw threw 95 pitches and hit for himself in the 7th inning, so it looked like he would come out for the 8th. However, much to the surprise of everybody, Dave Roberts removed Kershaw and inserted Pedro Baez.

I thought games like today were exactly why they take him out at like 90 pitches when they're up 4-0 and stuff.

Really thought close games like this where they need to extend him past 100 pitches is exactly what they take him out early in other games for. Suppose Roberts knows best in terms of where his fatigue level was at, but if this was just rest for later, then it strikes me as rather silly.

Either way, Baez entered for the 8th and promptly gave up a lead-off triple, partially thanks to Chris Taylor‘s misplay off the wall in center. Things looked awful bleak at that point with 2-3-4 due up and nobody out, but Baez notched a strikeout to give some hope, and then pulled off this miracle grab on a comebacker to erase the runner at third.

Hey, he used to play third base, right? Right. Rather be lucky than good.

That setup Kenley Jansen for the four-out save attempt, which he called for himself as he did Roberts’ job for him by taking out Baez.

Kenley Jansen does Dave Roberts' job for him, removes Pedro Baez from game himself pic.twitter.com/Xg0gu2uITM

Kenley got out of the 8th by inducing a dribbler back to him. Jansen then continued in the 9th clinging to a one-run lead, and gave up a lead-off single that was kept to a single thanks to a great play in right by Yasiel Puig cutting the ball off down the line.

After getting a fly out, a stolen base put a runner in scoring position and made my cheeks clench a bit. Luckily though, Jansen got a clutch strikeout and pop-out to end the game and secure the victory.

Victory moves the Dodgers to 36-25 on the year and 22-10 at Chavez Ravine. It also temporarily moves them 1.5 games back of the Rockies and into sole possession of second place in the NL West, but the Rockies are currently winning and the Diamondbacks are yet to play today, so most likely they are just keeping pace.

After a day off tomorrow, the Dodgers get the Reds at Dodger Stadium starting at 4:10 PM HST/7:10 PM PST/10:10 PM EST. Rich Hill (4.15 ERA/5.40 FIP/8.02 DRA) will look to start a streak of some type of quality consistency, as he has truly been flat-out bad this year and needs to find feel of his curve. He’ll be facing Amir Garrett (7.17 ERA/7.18 FIP/7.73 DRA), who has also been quite terrible on the year and is somebody the Dodgers offense needs to rebound against.