In a way, Kenley Jansen is the hardest Dodger to write about. It’s not because he isn’t great, or special, or amazing. It’s that he’s too great, too special, too amazing. Here at Dodgers Digest we like to write about the things we didn’t predict: outlier seasons, mechanical adjustments, what the hell is going on with Chris Taylor, or which particular reliever we’re about to curse. Jansen blowing through the league is predictable. We saw dominance coming, even if it wasn’t this particular type of dominance.

How do you contextualize it? Jansen has been historically great, but this is still our first non-review Jansen post since he re-signed last winter.

It’s June 19. Jansen has pitched 29 2/3 innings this season and has faced 107 batters. He has struck out 50 of them and has not walked any. The longest streak of strikeouts without a walk allowed to start a season before Jansen was by Adam Wainwright in 2013, with 35. Jansen has topped that record by 15, and the record continues to grow. This is nearing the realm of the unbreakable, depending on how you feel about the trajectory of strikeout trends in baseball.

Rather than looking at the dominance overall (which we already knew about), let’s look at the points at which Jansen almost lost the record which he continues to build. Let’s look at his three ball counts this season. There haven’t been many:

There are a few things to digest here. First, Jansen has only reached three-ball counts six times this year. He struck out five of those batters, because of course he did. Second, Jansen has never reached a 3-0 count this year, and has only fallen behind 3-1 twice. Finally, Jansen has not had a three-ball count since May 9th. In the time since that period, Jansen has faced 58 batters and struck out 25 while throwing 222 pitches. Since Jansen broke the record with his 36th strikeout of the season without issuing a walk, he hasn’t been in any danger of snapping it. His last three-ball count was when he had 27 strikeouts on the season.

Here are the nine pitches Jansen has thrown with three balls this year, via Baseball Savant: 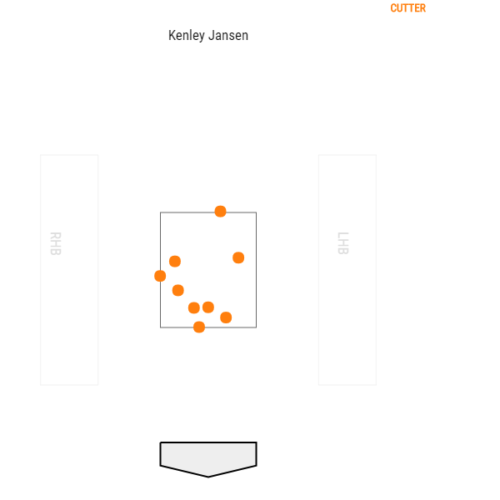 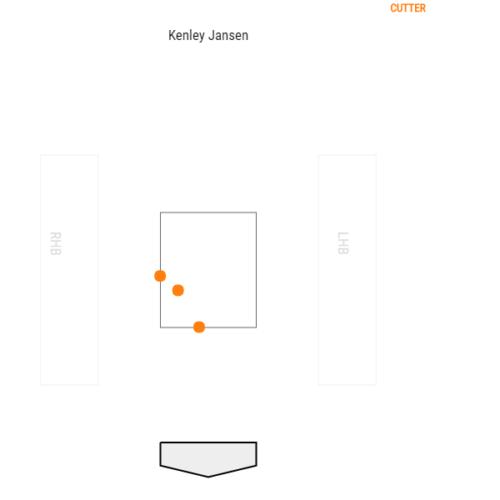 Now things are getting interesting. These are the three called strikeouts on the chart above. The point in the fat part of the zone is Ngoepe, on Jansen’s last three-ball count six weeks ago.

The point on the left is Herrmann on April 15. Here’s that pitch:

This seems like a clear-cut strike. Jansen nails the target. Herrmann almost swings anyways. Pitchers get the outside corners on left-handed batter very frequently. In this case, the cut helped the pitch clip the back door.

The strikeout on the low part of the zone is much more interesting, partially because plots like this don’t really capture borderline low calls very well. This was the game which would later become known as the time Dave Roberts let Jansen pitch in a 10-1 blowout. However, this came in the eighth inning when Roberts threw Jansen into the fire to protect the lead. This was the strikeout: 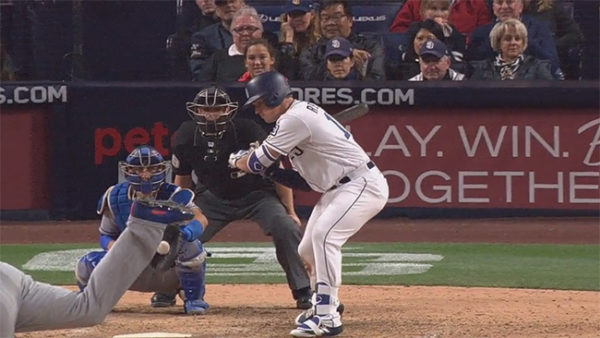 Stills like this are flawed because it’s impossible to get a good read on where the ball crossed the forward edge of the strike zone, but that pitch is extremely borderline at best. Perhaps this is where we should give some credit to Austin Barnes (catching in the second GIF) and Yasmani Grandal (catching in the first GIF) as well. Jansen’s contribution to Jansen’s streak is obviously the most important, but an elite framing catcher has helped keep it alive, and helped Jansen reach more advantageous counts in the first place.

All in all, there were only two pitches, of the 422 Jansen has thrown this year, where his streak was in real danger. There were two batters among the 107 Jansen has faced this season who even almost walked. Perhaps on one of those, Jansen was a little bit lucky. In order to set a potentially unbreakable record, one needs to be lucky sometimes. Even if Jansen did walk Renfroe, we’d be talking about a 49:1 K:BB ratio instead of 50:0. Instead of witnessing historical greatness, we’d be witnessing historical greatness. However, now we have something more tangible to talk about, and also something baseball fans will be unlikely to forget any time soon.

The MLB record for most strikeouts without a walk at any point in a season appears to be 56, set by Curt Schilling in 2002. Jansen’s current tally on this record is 52. He walked two batters in his final appearance of the 2016 regular season before striking out Brandon Crawford and Gordon Beckham to end the year. Before the two walks issued in that outing, Jansen had a streak of 34 consecutive strikeouts without issuing a walk.