The Dodgers’ pursuit of a fifth straight National League West division title will be challenged by the Colorado Rockies and the Arizona Diamondbacks this season, in what could be a three-way dogfight down the stretch. This makes for some good baseball.

There’s still plenty of time for the Rockies and D-backs to regress from their strong starts to the year, but the Dodgers know that they have been playing good baseball as well. Recently, however, the Dodgers have pulled ahead in the NL West division race. After completing a three-game sweep of the Rockies, they are 2 1/2 games ahead of Arizona and 4 1/2 in front of Colorado. The Dodgers virtually have a lock on the division with a 100-percent probability of clinching a postseason berth, according to FanGraphs. 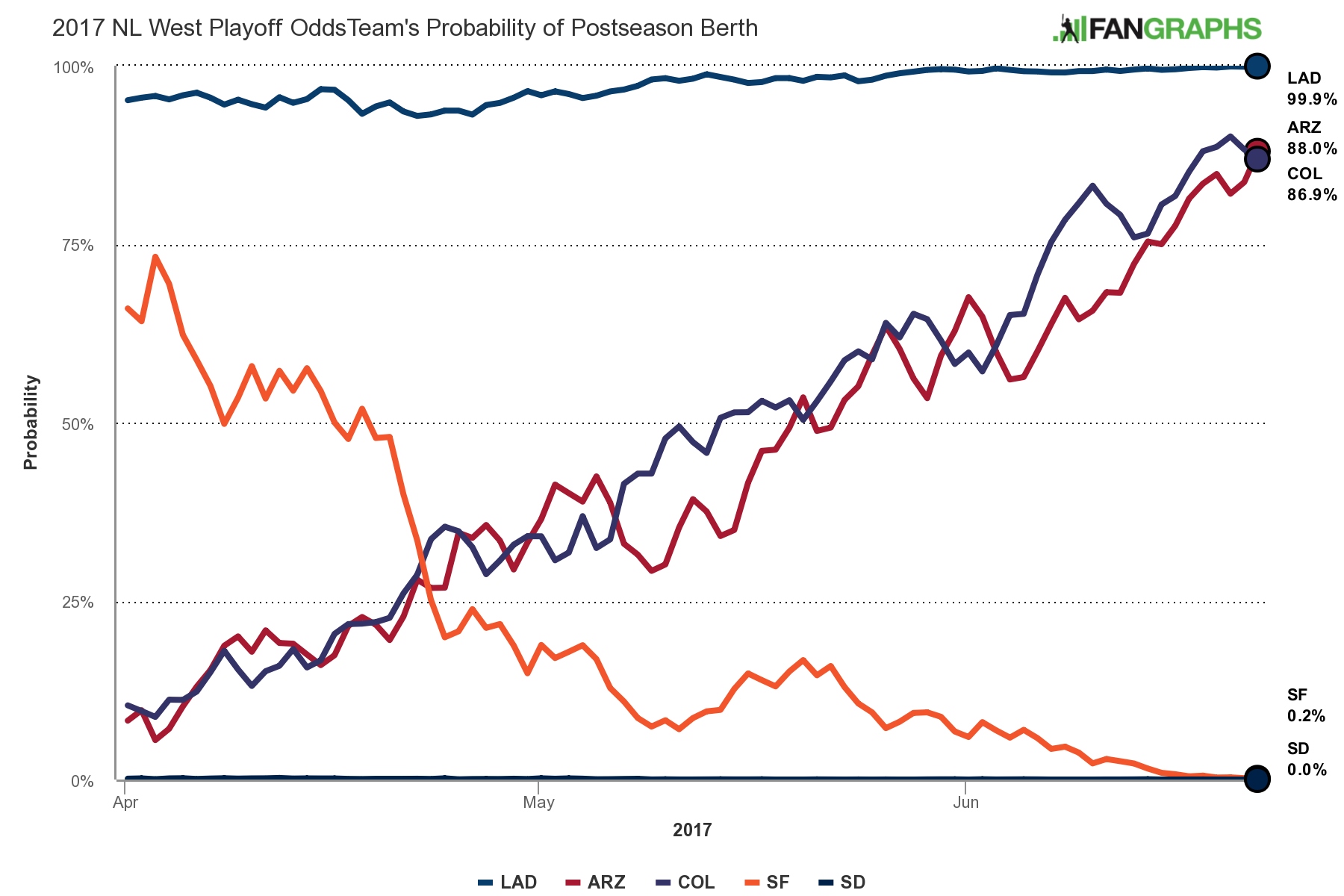 The Dodgers (51-26) have been playing better baseball than they have in years right now, and they’ll go for their 11th (!) straight win Monday night in the Freeway Series opener against the Angels at Dodger Stadium. The Rockies (47-31), staying steady with the Dodgers for most of the season so far, recently snapped their own six-game winning streak and were swept by the Dodgers in three games extending their losing streak to five games. The Diamondbacks (48-28), also very much still in the mix, have been dominant at home (28-10). The Padres (31-45) and Giants (27-51) are well on their way to having abysmal years. More on the Giants’ woes in a bit.

In order to defend their NL West division title, the Dodgers obviously need to keep on winning. Yet there’s no guarantee that they are going to at such a remarkable rate, one of a 100-plus game winner. Before this past week when the Dodgers outscored their opponents by 40 runs, it almost felt as though they were treading water with Colorado and Arizona. The series sweep of the Rockies over the weekend has widened the lead for the Dodgers in the division, and their dominance is revealing itself more and more.

Before his team beat the Rockies 12-6, Dave Roberts told me he would rather have a big lead in the division right now if he had the choice, “I’d rather have a 10-game lead right now. But I think for our guys, whether it’s 3 1/2 or we’re trailing a team, we’re just trying to focus. We do a good job of focusing on just winning a game, and with the talent that we have in the clubhouse we’re going to win a lot more than we’re going to lose if we keep that mindset. It’s hard to win a Major League game, regardless of who you’re playing. And any given day their pitcher can throw out a gem and you have to go out there and have that mindset. And we do a good job of that.”

The Rockies are still formidable competitors, even though they have now lost five straight games. It’s still only June, but their success this season is going beyond their typical hot start which in turn predictably cools down after the first two months. This season, they seem to be sticking around. Charlie Blackmon, Nolan Arenado, DJ LeMahieu and Mark Reynolds are all hitting around .300 with 52 home runs among them. And as a team they have an NL West-best .270 batting average.

But the Dodgers can also hit, and after hitting two home runs against the Rockies on Sunday at Dodger Stadium, rookie Cody Bellinger explained that his focus is mostly day-to-day, “I think day-to-day, but when you have a division rival like the Rockies who are really talented I think there’s always a little extra motivation to win that game.”

The Diamondbacks are right in the thick of it too, a surprise success this season. Coming off a 93-loss season, they didn’t turn to full-on seller mode this off-season. They signed Fernando Rodney and traded Jean Segura for Taijuan Walker, but they didn’t make any other big moves. Even with the absence of A.J. Pollock, who has missed significant time with groin issues, the D-backs have proven they have a well-rounded team primed to make an impact on the division this season. They recently finished up a three-city road trip, going 7-1 with a franchise best winning percentage (.875).

Paul Goldschmidt and company, including old friend Zack Greinke, are playing well in the land of the cacti. Goldy is performing at MVP levels again, as he’s first in the NL with a fWAR of 4. Craig Edwards at FanGraphs made the case for Goldschmidt being the best offensive player in baseball, and I don’t disagree. Edwards also cited Goldschmidt’s surprisingly good base running skills, which has Goldschmidt currently seventh in the NL with 13 stolen bases (first amongst all first basemen in the majors).

The Dodgers, D-backs and Rockies all have excellent pitching staffs, starting and relief. The Dodgers have the best pitching staff ERA (3.30) in the NL, Arizona is second (3.38) and the Rockies eighth (4.48), with the Dodgers missing a bit more bats (26 strikeout percent) than the D-backs (24.8 percent) and Rockies (20.8 percent). Greinke is back to his dominating self after his disappointing 2016 with the Snakes, and he’s lowered his ERA at Chase Field this year from 4.81 to 2.77 without a loss yet (6-0). He’s struck out 28.7 percent of batters, and his strikeout to walk percentage has improved by 10 percent over last season.

The Rockies have a slightly less successful bullpen than the Dodgers and D-backs, who have two of the best relief squads in the NL. Coming into Sunday, the Dodgers have a NL-best 2.95 bullpen ERA with a 1.09 WHIP and 298 strikeouts in 256 2/3 innings of work. The D-backs, with a 3.33 bullpen ERA, have allowed the second-lowest number of home runs on the year (25). The Rockies are eighth in the NL with a 4.28 ERA, although the pens of the Rockies and D-backs have each only blown six saves. The Dodgers’ bullpen has blown eight saves.

I would be remiss if I didn’t talk about the Giants. They’re on their way to having the worst season in franchise history. Madison Bumgarner‘s dirt bike accident was a shocking blow to the gut for Bruce Bochy‘s Giants, but they’ve also played poorly regardless of MadBum’s antics. Their outfield defense is bad, last in the majors in defensive runs saved (DRS) with -44. Their offense is also bad. They’ve scored 293 runs this year,  third-worst in the NL. They’ve hit the least home runs in the league (64), and have a .241/.302/.371/.673 collective slashline with a 80 wRC+. The Padres are the worst hitting club in the majors with a .226 batting average and 79 wRC+.

The Giants and Padres will not be a factor in October (they have less than a 1 percent chance to make it to the playoffs), but it could be possible that all three teams from the NL West win a berth in the playoffs. The remaining contests between the three clubs could be very important in the second half when the pennant races heat up even more. Every series is integral, and could determine who has to play in the precarious Wild Card game. The defending NL West Champion Dodgers will not have a straightforward route to the clincher this time around, but hang on for some great baseball in the second half.

Kenley Jansen, the Dodgers’ closer, had this to say about pitching in a competitive division, “We know that Colorado and Arizona are not going to go away. They’re going to be playing good baseball. We just got to keep focused and try to win every game we can.”

The second half of the season should prove to be a test for the Dodgers and their health. With three divisional opponents pushing each other to be the best, there’s sure to be some great baseball in the Wild West. It’s been a long time since the NL West was so competitive, as in recent years the division usually is one of the weakest in baseball. But this year, outside of the West, the Washington Nationals, Chicago Cubs and Milwaukee Brewers are the only other NL teams with a winning record.

The Dodgers have 12 games remaining against Arizona and seven games against Colorado, with the final three-game series of the season for the Dodgers at Coors Field. The Dodgers will next host the D-backs from July 4-6.

Stacie Wheeler, born and raised in So Cal, has been writing about the Dodgers since 2010. She wrote daily as the co-editor of Lasorda's Lair for five long years, and she has also written for Dodgers Nation, Dodger Blue 1958 and The Hardball Times. She currently contributes to True Blue LA. Stacie graduated from the University Of Southern California with a bachelor's degree in Cinema-Television. You can also watch her videos on her YouTube channel, DishingUpTheDodgers.
@StacieMWheeler
Previous Dodgers 12, Rockies 6: Wild pitches define a wild game, Dodgers get to 10 in a row
Next Podcast: ‘Dugout Blues’ episode 202 – Urias, Seager, 10 in a row, Bellinger