Cody Bellinger does another thing well: he hits in a 1-2 count

Cody Bellinger has been downright amazing in his first two months in the majors. No one saw this coming. He has been the offensive sparkplug the Dodgers have needed since the end of April, and he’s thriving. He’s also doing something else well: he’s hitting at an elite level when the count gets to 1 ball and 2 strikes.

Rewind for a second. The Dodgers have already emphasized how important the 1-1 count is for both hitters and pitchers. This is from the Los Angeles Times almost two years ago.

“But advanced analytics show the 1-1 count actually is most likely to be an at-bat’s turning point, and teams like the Dodgers, whose front office is constantly probing for even the slimmest of edges, are trying to leverage the count to their advantage.”

“‘We, organizationally, are stressing what pitchers and what hitters can control versus what things are out of their control,’ says Gabe Kapler, the team’s director of player development.”

And nearly a couple months after the LA Times article, this was revealed by Dodger Insider.

“The 1–1 pitch has been elevated by more recent research and discussion as baseball’s most important pitch. Grantland discussed it here last year. The Times wrote about it here in August. And even back in January at the Dodgers’ Winter Development Camp, pitching prospects were shown slides from a projector detailing how the pitch could be a difference maker in at-bats, games and a season. And it was used as an example for how being an effective strike thrower correlates to better Major League salaries. Almost across the board, Dodger batters are better when turning the count to 2–1 than 1–2. And the same goes for pitchers who can put batters in a 1–2 hole.”

It’s not just a Dodger thing, either. Max Scherzer has been talking about the importance of the 1-1 count since 2013.

Currently, he’s among the best in the majors among qualified players if you sort by OPS.

The only other player on the Dodgers who is doing much of anything on a 1-2 count is Chase Utley, who has a .269/.269/.538 triple slash on the count (26 plate appearances). Austin Barnes is 4-for-11 on 1-2, but it’s an even smaller sample size than the others. It makes sense that Utley and Barnes would be there (contact-oriented, not big power guys), but Bellinger has run into a few while in the extreme pitcher’s count.

And not every pitch on 1-2 that Bellinger has hit have been hanging breaking pitches. In fact, it looks like there’s just one true “hanger” in the lot. 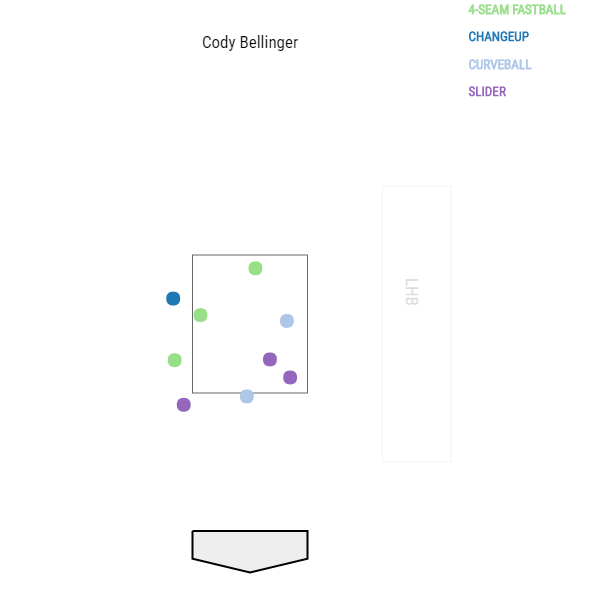 Not just fastballs, not just breakers. 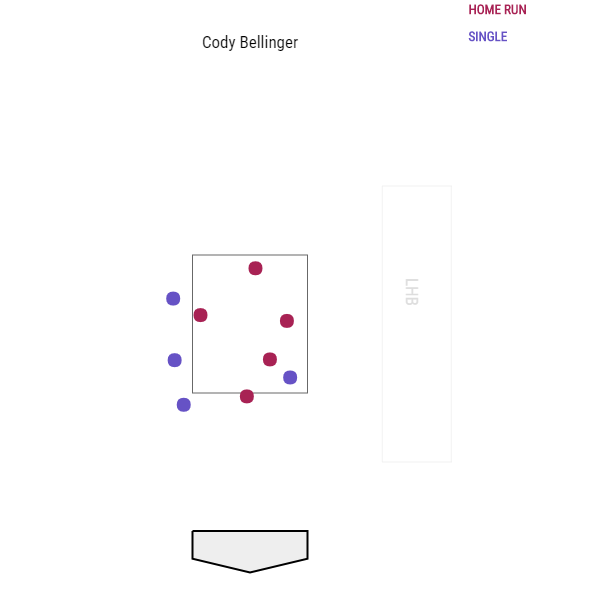 This isn’t meant to be a revolutionary post by any means, and again, the sample size is quite small. However, it’s worth pointing out that Bellinger gets himself into a significant number of 1-2 counts, and so far that hasn’t meant it’s going to end poorly for him or the Dodgers. While a vast majority of MLB hitters struggle in the count, Bellinger and some select veteran hitters seem to thrive.

Dustin Nosler began writing about the Dodgers in July 2009 at his blog, Feelin' Kinda Blue. He co-hosted a weekly podcast with Jared Massey called Dugout Blues. He was a contributor/editor at The Hardball Times and True Blue LA. He graduated from California State University, Sacramento, with his bachelor’s degree in journalism and a minor in digital media. While at CSUS, he worked for the student-run newspaper The State Hornet for three years, culminating with a 1-year term as editor-in-chief. He resides in Stockton, Calif.
@DustinNosler
Previous Dodgers 4, Angels 0: Kenta Maeda’s gem, Joc Pederson’s dong lead to bounce back win
Next Dodgers @ Angels June 28, 2017: Ryu vs. Meyer