This series is really moving along. Next up is Yu Darvish, the Rangers’ ace who will be the fifth (from the fifth team, at least) trade deadline candidate examined.

The Texas Rangers are two games under .500, 2 1/2 games out of the second wild card spot and are in the midst of a disappointing season. The Rangers are expected to listen to offers for Darvish and former Ned Colletti white whale Cole Hamels.

There's an increasing buzz that #Rangers will listen on Yu Darvish and Cole Hamels if team doesn't pick up its play before July 31 deadline.

You know, unless they aren’t.

“Here is the question on everybody’s mind: Will the Rangers sign or trade Yu Darvish? Here is what they will do: Neither. I say this with absolute certainty. I think. Or let Jon Daniels say it. ‘He’s the kind of player, the kind of pitcher we’d like to have going forward,’ Daniels said Friday on KTCK-AM (1310) The Ticket as he was checking in for a flight to Kansas City not too far away from where Darvish stood. ‘Long story short, we’d like to have him here beyond this year. Ultimately, it comes down to financial terms.’ ‘We’ve agreed to handle that privately,’ Daniels added. ‘We’d like to have him. It’s a matter of whether there is common ground and we can meet in the middle.’ In other words: Almost nothing has changed.”

Look at all those 1-sentence paragraphs! That’s Plaschke-esque.

But let’s be real: The Rangers would be foolish not to cash in on a weak starting pitcher market and get what they can for Darvish. Even though they’d like to keep him (it seems), they could always just sign him in the offseason if they’d like.

Darvish is the best Japanese player to come from Nippon Professional Baseball since Hiroki Kuroda in 2008 and Ichiro Suzuki in 2001 before him. He’s that good. He even had Tommy John surgery and missed the entire 2015 season. He’s truly a major leaguer.

Darvish’s stuff profile isn’t that dissimilar to Brandon McCarthy — both are fastball-cutter-breaking ball guys. One difference is McCarthy throws his curveball a lot more than Darvish, and Darvish throws a slider whereas McCarthy does not. But they’re basically 3-pitch pitchers. Where they differ is how many whiffs they get with their offerings. McCarthy is a sub-10 percent swinging strike guy while Darvish misses bats, and he has the 14th-best SwStr% in baseball since he debuted in 2012.

When Darvish is at his best, he’s a Top 10-15 starting pitcher in all of baseball. His strikeouts are down by almost 6 percent from last season, which is a bit concerning. Here’s an ugly-ish chart: 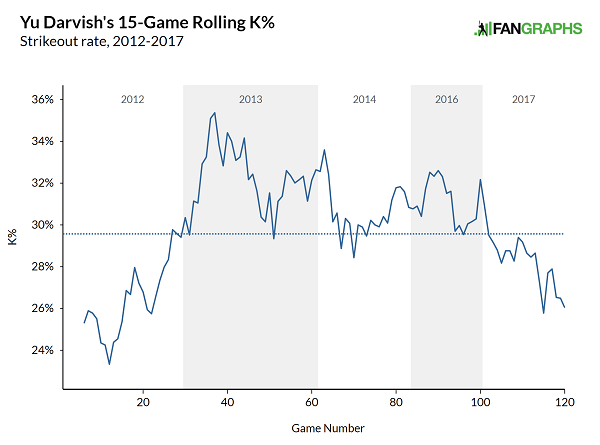 Not great, and it could be due mostly to his slider’s whiff rate falling by almost 8 percent from last season. His sinker is also getting tagged (.308 batting average, .431 slugging), so that could be the cause of the overall falling strikeout rate. Despite that, he’s still striking out a quarter of the hitters he has faced. Couple that with a no-worse-than-average walk rate and you have a strong starting pitcher. He also appears to be fully healthy, as he’s averaging a career-best 94 MPH on his fastball that he throws 52 percent of the time. His slider is also clocking in at a higher velocity than in the past.

Darvish isn’t better than Alex Wood has been this season, but he’d be a clear upgrade over McCarthy and might be a more consistent/reliable option than Rich Hill. Furthermore, if Darvish were to get traded to the NL, his home run rate should drop a bit — juiced ball or no. And the fact he averages 6.2 innings per start would be welcome news to the Dodgers’ bullpen.

He’s a free agent after the season, and Dave Cameron at FanGraphs looked at a potential return for Darvish’s service back in May.

“The market has provided a pretty clear indicator of what renting an ace costs; a top 50-ish prospect plus a couple of add-on pieces that have upside. The Rangers can probably argue that Darvish’s stuff and ability to strike everybody out put him a bit ahead of a guy like Cueto, who relies a bit more on the weak-contact approach, which teams usually won’t pay as much for. The Price and Greinke deals are probably closer to what Texas is going to be looking for.”

Refresher course: The Tigers gave up Daniel Norris, Matt Boyd and Jairo Labourt for David Price in 2015. The Royals gave up Brandon Finnegan, John Lamb and Cody Reed for Johnny Cueto, also in 2015. The Angels gave up Jean Segura, Johnny Hellweg and Ariel Pena for Zack Greinke in 2012. So with that in mind here’s my attempt at two different packages.

In this package, you get the high-ceiling, highly-rated prospect in Alvarez and two not insignificant prospects, but not Top 10 guys in the system, either. Rios could be up sooner rather than later for the Rangers, while Alvarez and Sheffield need a bit more development time.

In this package, you don’t get the high-ceiling, highly rated prospect in Alvarez, but you get a definite Top 100 guy in Calhoun, a Top 100 guy (in some folks’ eyes) in Diaz and a low-level lottery ticket arm in Alexy.

With Jose Quintana off the market and Sonny Gray sure to fetch a haul for the A’s from some team (maybe the Dodgers; see above), Darvish might be the “win now” upgrade the Dodgers truly need. He’s the best pitcher on the market (if he’s available) and could be a difference-maker come October. The Dodgers don’t need him, but if they can acquire Darvish, slot him into the No. 3 spot in the rotation, that would give the Dodgers a lethal 1-4 in the postseason. It isn’t that different than if the Dodgers acquired J.D. Martinez to add to the lineup, at least insofar as it’s more of an insurance policy against regression and/or injury than actually upgrading a need.

Dustin Nosler began writing about the Dodgers in July 2009 at his blog, Feelin' Kinda Blue. He co-hosted a weekly podcast with Jared Massey called Dugout Blues. He was a contributor/editor at The Hardball Times and True Blue LA. He graduated from California State University, Sacramento, with his bachelor’s degree in journalism and a minor in digital media. While at CSUS, he worked for the student-run newspaper The State Hornet for three years, culminating with a 1-year term as editor-in-chief. He resides in Stockton, Calif.
@DustinNosler
Previous Podcast: ‘Dugout Blues’ episode 205 – All-Star, Puig, Bellinger cycle, Wood, Buehler
Next Dodgers @ White Sox July 18, 2017: Hello, Guaranteed Rate Field