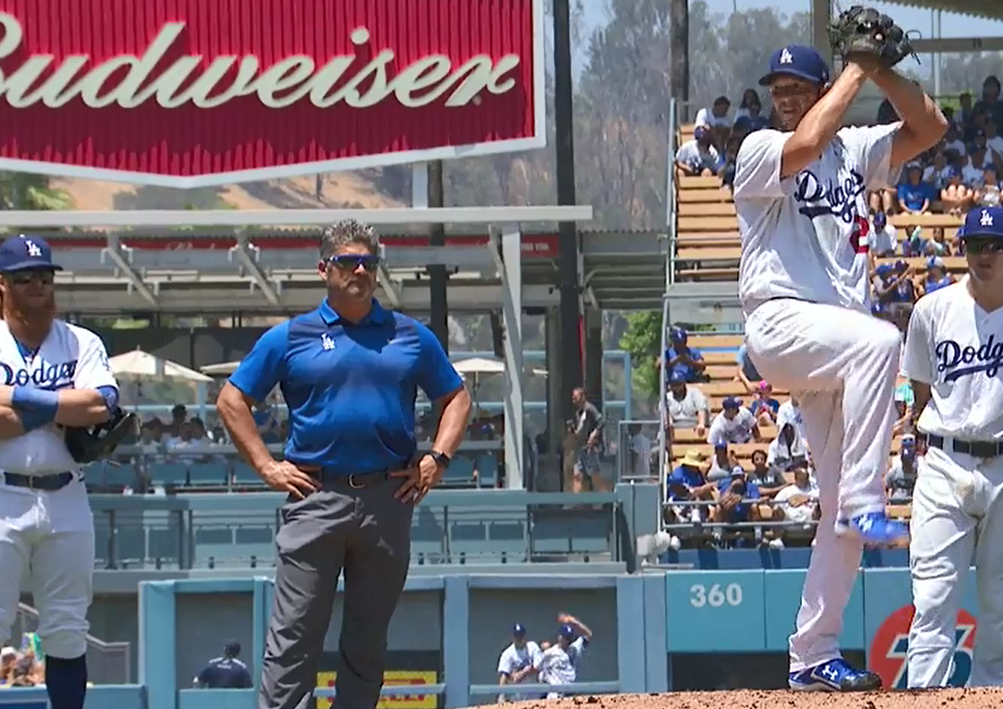 After dropping the first two games of the four-game series to the Braves, the Dodgers rebounded and took the next two, including this afternoon’s contest by a score of 5-4. However, any excitement over the team getting back on track is surely muted by the injury that occurred to the Dodgers superstar.

Clayton Kershaw started the game off with five outs in a row before issuing a walk and getting the sixth out on a strikeout. No problem, right? Well, there was a major problem as Kershaw looked to be throwing at reduced effort, with his fastball sitting 88-90 mph and his mechanics definitely abbreviated.

Dave Roberts and the trainer came out to the mound, and they seemed to be looking at either his hip or back, both of which have given him trouble before. Kershaw did finish the inning, so it wasn’t some kind of acute issue, but obviously the concern is gigantic. Without Kershaw, all of this magic in 2017 is at risk.

Kershaw has right low back tightness.

Not great, but it depends on how bad it is.

Ross Stripling entered in the third in relief and did an amazing job. He pitched three frames and gave 36 pitches, surrendering just two hits and two walks in his emergency appearance. While he did give up a run, even that came on a double where Brandon Phillips swung late and got it off the end of the bat down the line in right.

Thankfully, the Dodgers offense made it worth something in the fourth when they finally cashed in on Sean Newcomb‘s walks. Logan Forsythe and Enrique Hernandez drew back-to-back walks to start things, which setup Austin Barnes, who somehow got around on an 0-2 fastball and yanked it down the line for a homer.

Much later in the eighth, Cody Bellinger provided the Dodgers with some insurance after getting a green light on a 3-0 pitch and smashing it to right.

Luis Avilan relieved Stripling in the sixth, getting a 1-2-3 frame, thanks in part to Forsythe’s incredible defensive day.

Today is the Logan Forsythe defensive showcase, I guess.

About now is when I start wondering harder why it was necessary to bring him in for the last out of the eighth.

Jansen returned for the ninth, and while he gave up two singles, he got the next two batters and everything seemed to be fine. Uh … then Matt Adams happened and he bombed a three-run homer to right on a cutter that didn’t cut that missed location down the middle instead of up like it was supposed to be. Kenley got out of the inning, but walked off with his first blown save of the year. Blame Andy McCullough.

LaVar 2.0, @McCulloughTimes, is trying to Tweet a Dodgers win into existence. pic.twitter.com/NIyM0BJNrc

After the Dodgers failed to walk it off in the ninth, Brandon Morrow took over in extras and got a 1-2-3 inning, regularly hitting triple digits even working back-to-back days.

In the 10th, Chris Taylor started things with a bloop single to right, and after Corey Seager narrowly avoided grounding into a double play, Justin Turner sharply singled to left center to put runners on the corners with one out. That brought Bellinger to the plate, and he was quickly intentionally walked to load the bases for Forsythe.

Quick, re-arrange the batting order so it's Barnes hitting fifth instead.

Literally seconds after I tweeted that, Forsythe banged a single up the middle for the walk-off win.

Roberts said Kershaw felt something on his last warm-up pitch going into the second inning. After the inning, took him out as precaution.

Clayton Kershaw did not feel pain shooting down his legs, as he did last year, Roberts said. That symptoms correlates to disk issues.

Clayton Kershaw will get examined by team doctor Robert Watkins tomorrow. He needs to undergo a series of scans.

Roberts said Kershaw will get tests done, should know more tomorrow. Doesn't want to speculate but said it is a DL situation.

The Dodgers get to 68-31 with the victory, including 41-13 at home. The Rockies won and the D-backs are on their way to losing, so the lead in the NL West remains at 10.5 over the Rockies. The Astros lost today, so the lead for HFA throughout the playoffs is now up to 2.5 games.