Dodgers 6, Giants 4: Another comeback win, this time against a Top 10 NL Pitcher™ 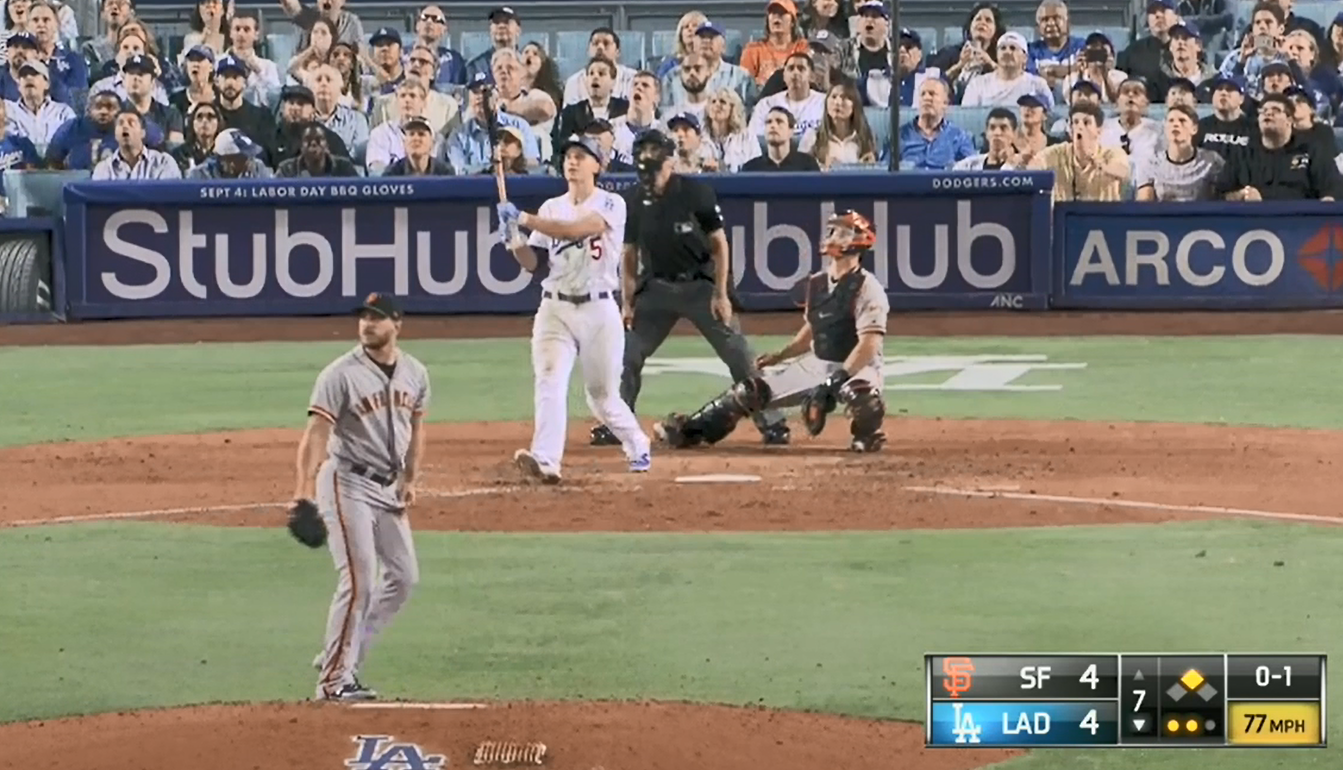 The Dodgers had a tough task in front of them today, facing the rivals Giants and a Top 10 Pitcher In the National League™.

One of the most underrated moves at deadline was #SFGiants acquisition of Matt Moore, who should blossom into one of NL's top 10 pitchers

Yet the Dodgers truly are magical this year, as they came back late against the Giants for a 6-4 victory to make it six wins in a row, including 37-6 in their last 43 games.

Alex Wood probably had the most misleading outing of the year so far, giving up four runs in seven innings but generally looking dominant. Wood struck out five and walked none, but allowed eight hits in his 99 pitches … many of those being rather unlucky.

In the second inning, Brandon Crawford hit a monster dong on a 92 mph fastball that was down but over the middle of the plate. For the most part, that was about it for the Giants through six innings. Unfortunately, the seventh happened. After a bloop single to left center started it, Wood appeared to induce a grounder with a double play chance, instead ending up with a runner at second and only one out because Corey Seager did … whatever this is.

That was followed by a grounder up the middle just out of the reach of Seager to plate a run, which was extra fun because that would’ve ended the inning with a double play if Seager just ate the throw on the previous play.

I like how the Giants immediately hit a grounder that would've been a easy double play after that mess.

The next batter then hit a grounder that hit off the bag for a double to score another run, and that was followed by a liner to center that Joc Pederson basically whiffed on for a double and another run.

Of the Giants' four hits that inning, Statcast says that only Gorky's double is a hit more than 50 percent of the time.

Thoughts on that, Alex?

Anyway, the result was less than ideal but this was definitely a start in which he rebounded, so just remember stuff like this when people site arbitrary endpoint statistics that start like after the All-Star break or whatever.

Luckily then, the offense ended up picking him up. Things started in the first when Seager hit an oppo taco solo shot.

A while later in the fifth, the Dodgers got a run from Wood himself grounding out to short with one down and runners on first and third.

Still, they entered the seventh trailing by two runs … no problem. Austin Barnes drew a lead-off walk, and with one out, Joc smacked a double into right-center to put runners on second and third. Pinch-hitter Yasiel Puig then grounded out to short, but it did end up scoring the run to cut the lead to one. Chris Taylor was the one who had the tying blow, doubling to left with two down to plate an important run.

Then Seager stepped up to the plate looking to give the Dodgers the lead, and he did exactly that by bombing a hanging curve to right for two runs.

The Dodgers would not relinquish that lead either, because the back-end of the pen is filthy with the emergence of Brandon Morrow. He pitched a 1-2-3 eighth inning with two strikeouts, including this absolute owning of Buster Posey.

Talks of Kenley Jansen scuffling? Meh. Jansen entered in the ninth and all he did was strike out the side on 13 pitches to lock the game down.

This is a good team playing good baseball.