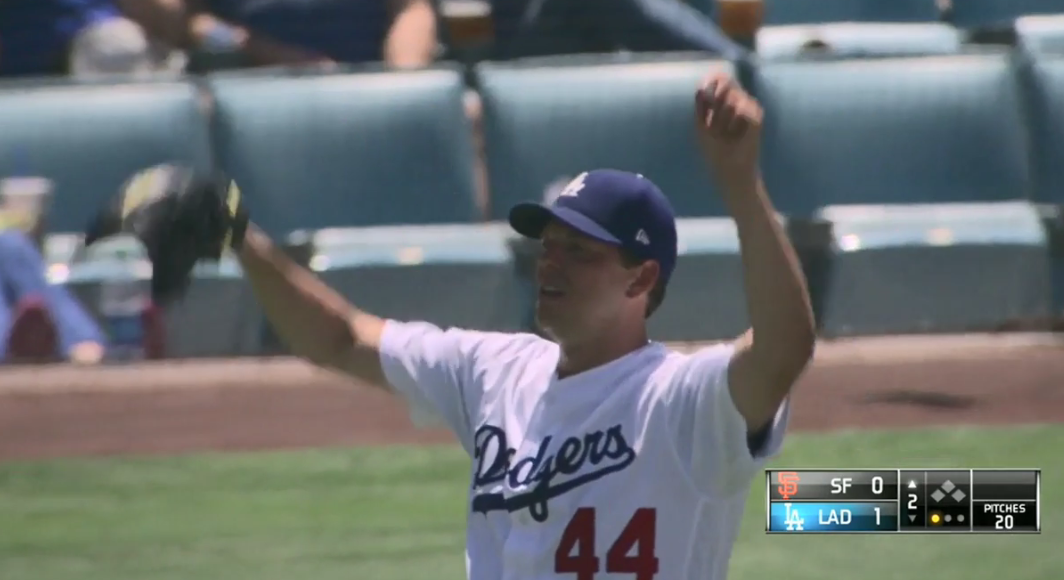 This is definitely the year for the Dodgers, as they defeated Ty Blach (and the Giants or tevs) by a score of 2-1, notable because he previously had a 1.17 ERA against the Blue in 23 innings.

That’s now seven wins in a row for the Dodgers, including 38-6 in their last 44 games. It’s getting real.

The bats didn’t exactly explode this game, which made things tense throughout — assuming you think the outcome of this game meant … well, anything. They were facing Blach, of course, who has probably has a career ERA two runs lower than it would be thanks to the Dodgers.

Mercifully though, they did get runs thanks to Cody Bellinger RBI singles in the first and third innings.

Thankfully, Rich Hill managed to make that stick, going 5.2 innings and striking out three while allowing just two hits and two walks. Hill did give up a run, however, to a no-doubter from Hunter Pence in the fourth, but otherwise looked quite good again.

It helped, of course, that Yasiel Puig and Justin Turner made plays behind him like this.

Due to the bug that’s been going around the clubhouse, a sick Hill was removed after just 86 pitches, but it doesn’t seem like anything to be concerned about.

Pedro Baez entered and delivered four outs in a row, including one strikeout. Josh Fields entered for the eighth and got one out before being relieved for Luis Avilan, as Dave Roberts apparently decided to practice managing for the playoffs today. Avilan allowed a walk, but got two outs to get the Dodgers to their closer with the lead.

Kenley Jansen was back for the save after striking out the side yesterday. Jansen allowed an infield single this time, but promptly got a double play. Then after a rare walk and a ground-ball single to put the game into question, Jansen rebounded with a strikeout to end it.

The Dodgers are now 73-31 overall and 46-13 at home. That is good. The Diamondbacks have yet to play, so the NL West lead is 13.5 for now. Meanwhile, the Astros have yet to finish, so the best record in baseball lead is 4 games for now.

A year later and the narrative now is Madison Bumgarner acted like a dick because he was being a True Leader™. pic.twitter.com/K5ZGqm6mB6