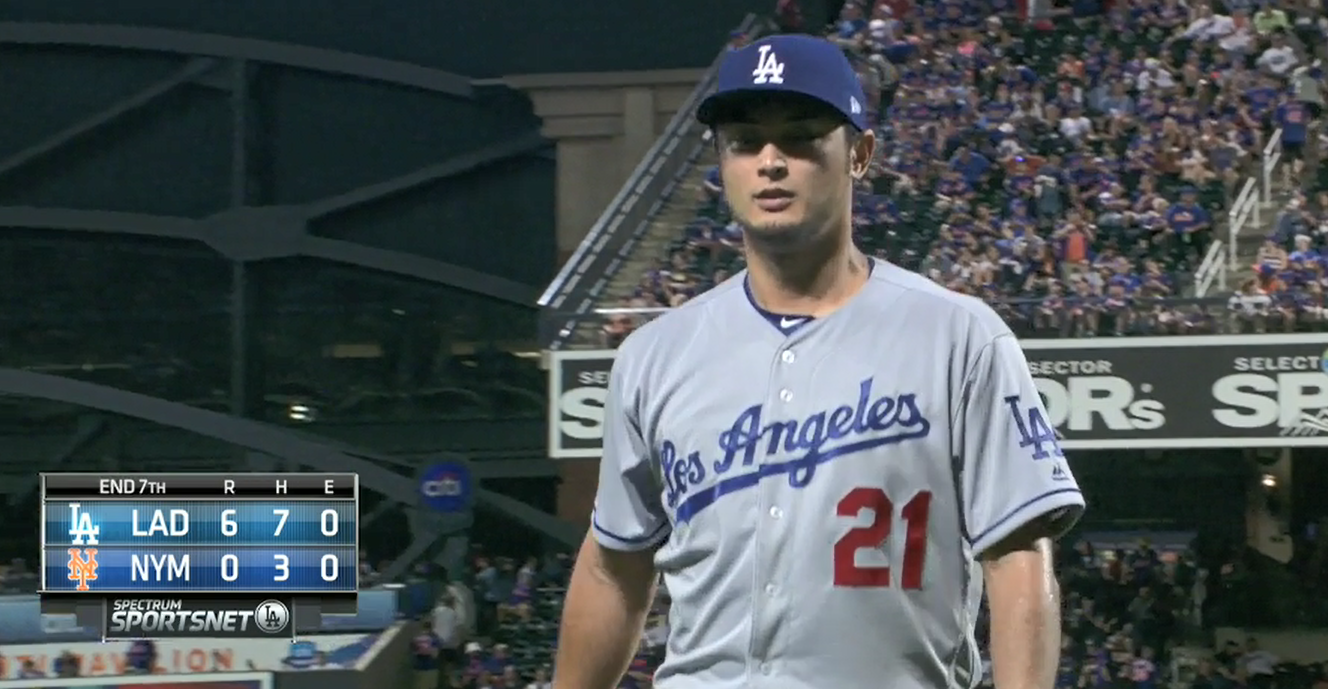 The Dodgers prevailed over the Mets, 6-0, thanks in large part to the much-anticipated debut of the newly acquired Yu Darvish. It was awesome.

Again, most importantly, the Dodgers are now 42-7 in their last 49 games. They are a win tomorrow from beating the 2013 run.

Darvish made a hell of a first impression tonight, completely putting aside any concerns about tipping pitches or reduced effectiveness after his disasterous exit for the Rangers, turning it around completely with seven shutout innings on 99 pitches.

The stuff was amazing to watch.

Darvish basically cruised through most of the night, putting up a zero after zero, but striking out 10 and allowing just three hits and a walk. This is fun already.

Of course, the matchup was playoff-esque, as the Dodgers faced off against Jacob deGrom. Thankfully, Chris Taylor was ready, and he started the game with a homer.

An inning later, not much had changed, as Yasiel Puig yanked a solo dong to left.

That’s 20 for Puig, the number eight hitter in this lineup, a new career high.

Later, in the fifth, the offense had a weird inning as they got a quick run but also had a quick exit. Taylor and Corey Seager notched back-to-back singles to put runners at the corners … and Justin Turner grounded into a double play … but it scored a run. After Cody Bellinger popped out harmlessly to end the inning, it was a run but also an eight-pitch inning.

Still, the Dodgers ran up deGrom’s pitch count enough that it knocked him out after five, and they took advantage in the sixth, when Yasmani Grandal drew a one-out walk and was followed by Chase Utley‘s troll job 2-run shot.

Utley with a missile into the second deck off a lefty against the Mets in New York while getting booed? I mean, why wouldn’t he?

The offense added a little insurance in the seventh by following a relatively similar formula to the fifth. CT3 started things with a walk and Seager followed with a lined double off the wall. JT then followed that with a fly out to deep right that was caught but was plenty to drive in a run and make it a six-run advantage.

Thankfully, the bullpen didn’t find reason to make it more exciting from there, with shutout innings from Josh Fields and Luis Avilan to secure the win for Darvish in his debut.

The Dodgers improve to 77-32 with the victory, as well as 30-19 away from home. The Diamondbacks have yet to play, so the NL West lead is currently 14.5 games. The Astros are winning big but haven’t finished, so the lead for best record in baseball is temporarily 7.5 games.