The Renaissance of Brandon Morrow

Dave Roberts made the call to the bullpen on Saturday afternoon in New York, bringing in Brandon Morrow to relieve Rich Hill in the sixth inning of a tied game against the Mets. The Dodgers’ skipper has been able to go to the hard-throwing right-hander in high leverage situations, Morrow consistently proving his value as a key component of the Dodgers’ bullpen since being called up.

After a leadoff walk to Curtis Granderson, Morrow induced a pop out from Neil Walker and made an athletic play to feed a ground ball hit by Amed Rosario to Cody Bellinger at first base for the second out. After Granderson stole third, Morrow brought the heat with a 97 MPH fastball to strike out catcher Rene Rivera, preserving the tie and eventually collecting a win. Morrow continues to excel in a relief role for the Dodgers, but his transition from starting pitcher to effective reliever hasn’t come easy.

Morrow, 33, had to reinvent his pitching career after numerous injuries, inconsistency and illness set him back. Now he’s found his place within the Dodgers’ bullpen and is thriving. He very well could earn himself an eighth-inning role in front of Kenley Jansen if he stays healthy and effective. Roberts continues to test him in high-leverage spots like Saturday’s sixth-inning appearance at Citi Field, and Morrow continues to build trust after each successful outing.

Morrow was selected two spots ahead of Clayton Kershaw in the 2006 MLB June Amateur Draft by the Seattle Mariners out of Cal Berkeley with the fifth pick, and at the time projected to be a frontline starting pitcher. Though he had the raw talent, he was never able to perform to expectations as a starter due to a plethora of injuries that hampered his career over the years including: Radial nerve entrapment, biceps tendinitis, inflammation in his pitching arm, oblique and finger issues, shoulder surgery for impingement in 2015 and even a bout with valley fever shortly thereafter.

Despite the setbacks, the veteran still possesses electric stuff 11 years into his career. He’s bounced back at just the right time for the Dodgers, whose bullpen has notoriously needed reliable arms to man the so-called “bridge to Kenley.”

Unfortunately, his career would be temporarily derailed while with the San Diego Padres after he underwent shoulder surgery in 2015 and contracted a nasty case of valley fever. Morrow had a long road back to the mound after finally being diagnosed. There was even a small hole discovered in the tissue of his lung. He lost a significant amount of weight in the process, losing stamina he would need to go deep into games as a starting pitcher.

During this past offseason, Morrow signed a one-year minor-league deal with the Dodgers and was invited to camp as a non-roster invitee. This gave him the opportunity to join a competitive team and work his way back as a relief pitcher. So far, the signing has been a steal for LA, which took little risk in the contract that would pay a modest $1.25 million in the majors. Seven months later, the Dodgers have one of the top relief pitching staffs in the majors. They lead the NL with a 2.94 ERA and 1.08 WHIP, due in part to Morrow’s success and contributions out of the bullpen.

When the Dodgers signed Morrow in January, Chad wasn’t sure he was the solution to the Dodgers’ middle relief gap, but he thought it was worth taking a look at a talented pitcher who still showed some promise.

“The most promising thing here is that Morrow did in fact finish 2016 healthy. Also, his fastball velocity was back up to 94.2 mph, his highest since 2009, and his swinging strike rate was his highest since 2011 (different role noted), and thus it’s possible he could be rounding back into form for 2017. The question is what that form even is at this point. Either way, this seems like taking a flier on a talented pitcher who has had a tough go of it in his career more than a solution to the shaky bridge to Kenley Jansen. Still, there’s little to complain about unless this is a move that somehow prevents them from finding more sure options at the back-end.”

Morrow’s stint with the Dodgers didn’t start off so well. He failed to break with the team out of Spring Training, and had a couple of poor outings with the Triple-A Oklahoma City Dodgers in April. When Alex Wood landed on the disabled list in May with minor shoulder inflammation, Morrow was called up after finding some consistency in Triple-A. He was optioned back to OKC on June 10, but would return to the big club on June 21 to stay.

Since then, Morrow was been impressive, to say the least.

Brandon Morrow is not fair. pic.twitter.com/X5ikFAUJqR

Morrow didn’t allow an earned run in his first 11 appearances with the Dodgers, and he’s found success by utilizing his cutter when he’s behind in the count and batters are looking for that 100 MPH fastball. He has a four-seamer that flirts with 100 MPH and averages 97.9 MPH according to FanGraphs (up more than 3 MPH from last year when he pitched in relief for the Padres), a cutter that averages 92.6 MPH and a hard slider that averages 88.9 MPH. Not only is he in the top two percent as far as velocity in the majors, but he’s throwing 70 percent of his pitches for strikes.

Along with Josh Fields and Pedro Baez, Roberts has been able to use a varying combination of flame-throwing relievers to set up Jansen. The mixing and matching of arms in the middle and late innings has been extremely effective for the most part. 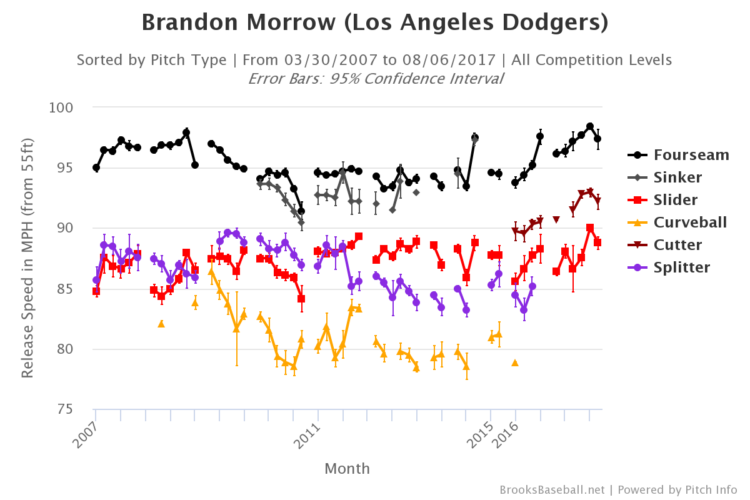 In 24 relief appearances with the Dodgers this year, Morrow is 4-0 with a 1.82 ERA, 1.23 FIP, 0.73 WHIP and has struck out 11.31 batters per nine innings. He has yet to surrender a home run in 24 2/3 innings, an important attribute for a Dodger reliever in a bullpen that has arms who are home run prone (I’m looking at you Baez).

Another caveat to Morrow’s renaissance has been his decreased walk rate, something that has been troublesome for most of his career. His career walk-rate is 10.3 percent, but with the Dodgers he’s only walked 4.3 percent of batters he’s faced (four walks in total, one being intentional) while striking out a career-best 33 percent. He’s also allowed only one hit to a left-handed batter all year.

The Dodgers have had quite a few stories of redemption recently, from Chris Taylor emerging as a MVP candidate, to former non-roster invitee Justin Turner becoming one of the best hitters in baseball, to Morrow’s journey and transition from starter to dominant reliever despite facing obstacles like injury, illness and Type 1 Diabetes. Should Morrow stay healthy and continue to pitch effectively down the stretch and into the postseason, his signing could be one of the better ones to have been made by the Dodgers’ front office.

It’s hard not to be cautiously optimistic about a guy who’s been so injury-prone and has shown consistency in such a small sample size with the Dodgers so far. Yet this team has made me a believer, and Morrow has been an important part of the acceptance phase.

Stacie Wheeler, born and raised in So Cal, has been writing about the Dodgers since 2010. She wrote daily as the co-editor of Lasorda's Lair for five long years, and she has also written for Dodgers Nation, Dodger Blue 1958 and The Hardball Times. She currently contributes to True Blue LA. Stacie graduated from the University Of Southern California with a bachelor's degree in Cinema-Television. You can also watch her videos on her YouTube channel, DishingUpTheDodgers.
@StacieMWheeler
Previous Dodgers 7, Mets 4: 2017 Dodgers are now 43-7 in last 50, besting 2013 Dodgers
Next Dodgers @ Mets August 6, 2017: Ryu, once again, for the sweep