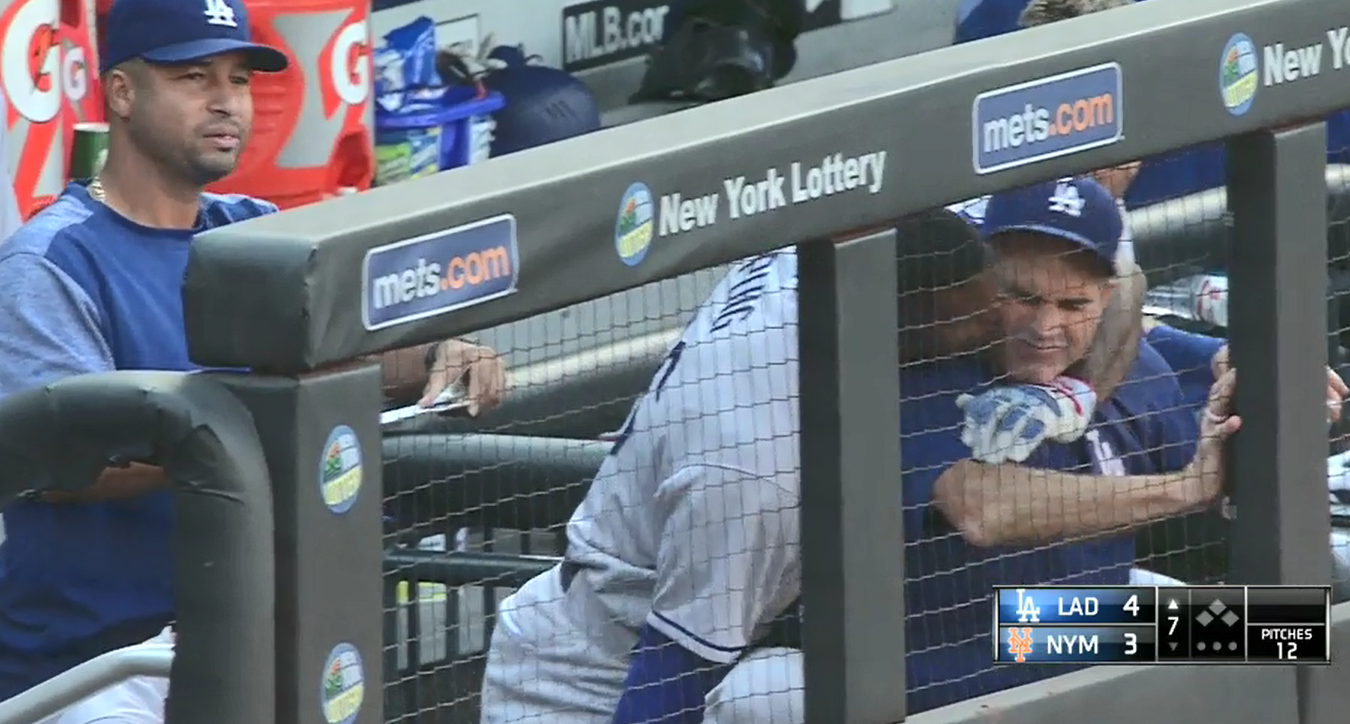 With a 7-4 win over the Mets this afternoon, the Dodgers have done the only thing that mattered to me for the rest of the regular season, which is beat the magical 42-8 run of the 2013 Dodgers. After winning their last three games in a row, the 2017 Dodgers now have won 43 of their last 50.

The @Dodgers are the first team to win 43 games in a 50-game span since the 1912 New York Giants. pic.twitter.com/UMjUZMa4xX

Amusingly enough, it probably couldn’t have started much worse, as Rich Hill allowed three homers in the first inning to put the Dodgers in a hole. As good as Hill has been recently, it was bizarre, but he seemed to be getting beat trying to establish his fastball. Fortunately, he settled in quickly, following that with four scoreless innings.

In fact, he was actually kinda dominant. He gave up three runs on three solo homers, but other than that allowed just three hits and a walk while striking out eight on the day.

After getting one-hit through five innings by Seth Lugo, the Dodgers bats finally awakened in the sixth. Chris Taylor got the inning off to a roaring start with a bomb to left-center field for the Dodgers’ first run.

With one out, Justin Turner plopped a single into left-center and Cody Bellinger promptly hit a two-run rainmaker to right-center to tie the game at three.

Just like that, the Dodgers were back in it.

Brandon Morrow relieved Hill in the sixth in a tie game, promptly issuing a walk to start things. Eventually a stolen base got him into actual trouble, but he escaped with a scoreless inning thanks to his only strikeout of the frame.

Good thing he preserved the tie, as Yasiel Puig started the seventh with a solo dong to untie it.

The offense got more insurance in the eighth after JT bombed the Dodgers’ fourth homer of the day, a solo shot to center to get a two-run lead.

Rewinding a bit, Pedro Baez got the seventh in 1-2-3 fashion, notching a strikeout, hopefully getting powered by the reverse Dodgers Digest curse via Dustin’s article on him. Of course, he started the eighth as well and issued a walk, but let’s just ignore that detail.

Baez was relieved by Tony Watson, who the Dodgers aren’t wasting any time throwing into the fire. Today he made that trust pay off with back-to-back strikeouts and a weak tapper in front of the plate to get out of the inning.

The rather tense game to that point turned into a much more relaxed affair after the Dodgers’ half of the ninth. Kyle Farmer started things with a single, and then with one out Corey Seager hit an absolute bomb into the second deck on a pitch that was about chin-high.

Ross Stripling then got closing duties and he actually gave up a homer to trim the four-run advantage to just three. Smartly, the Dodgers didn’t waste Kenley Jansen for savesssssss or whatever, and Stripling ended the inning and the game without more drama.

This is fun as hell.

As wonderful as the 42-8 stretch was, and I'm not putting it down, I never quite knew how the Dodgers did it. In this 43-7 run, no mystery.

.@YasielPuig dropped by #Studio42 after the @Dodgers win to talk his batting stance and defensive prowess! #MLBTonight pic.twitter.com/T5GP6xKICx

Yasiel Puig just walked into the Dodgers clubhouse with Vanessa Carlton's "A Thousand Miles" blasting from his headphones.

The Dodgers are now 79-32 overall and 32-19 on the road. 115-win pace and they just did something that hasn’t been done since 1912. The Diamondbacks lost and the Rockies won, so the NL West lead is now 14.5 games over the Rockies. With the Astros losing, the lead for the best record in baseball is now eight games.