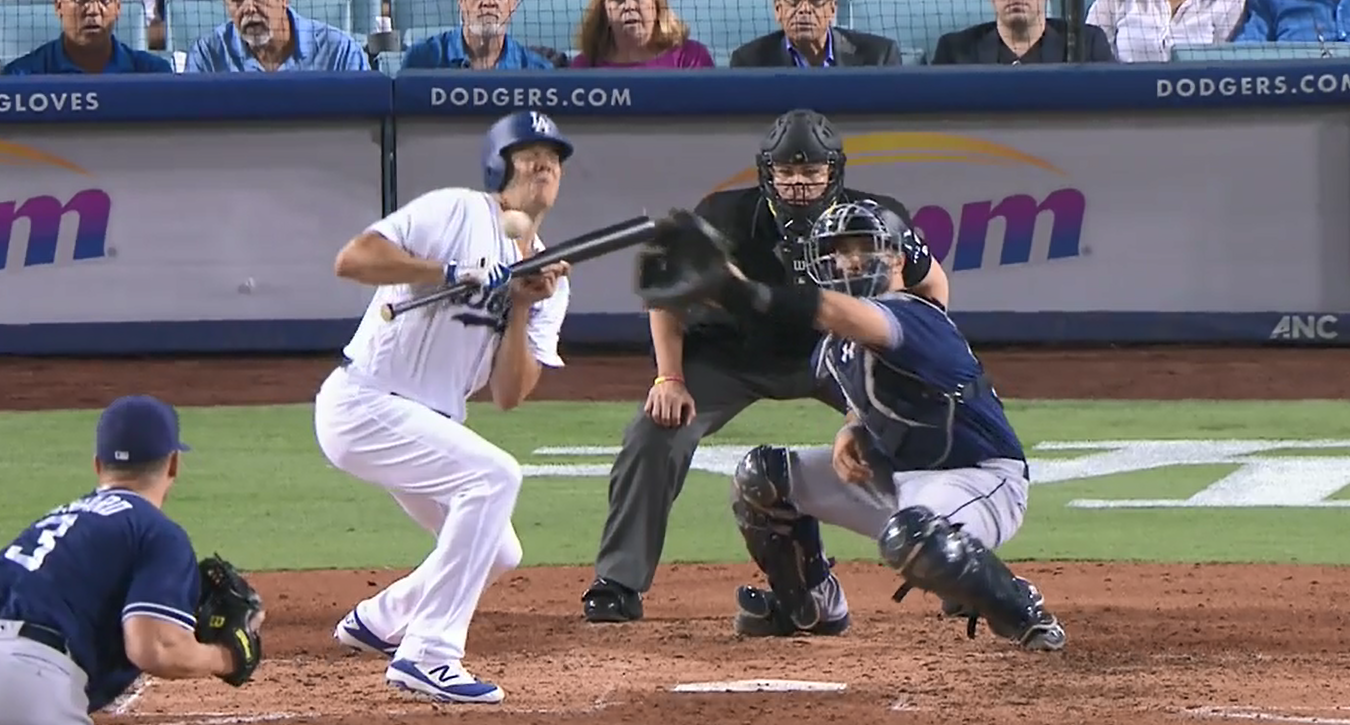 The Dodgers have an almost insurmountable lead this season … for the best record in baseball, thus the rest of the season is basically about rest and experimentation and not getting hurt. Well, Rich Hill‘s season (and life) narrowly avoided disaster, and that’s the important thing to remember even though the Dodgers fell to the lowly Padres, 4-3.

Hill’s command was sort of shaky today, and he ended up walking three batters in his six innings. Thankfully though, he limited the Padres to five hits, and aside from the two runs in the third frame, he didn’t cough up anything more. A lot of that is owed to the fact that his stuff was great, striking out nine batters on the evening.

The story, though, was that he pitched two of those innings after getting hit in the neck in the fourth while trying to bunt.

Not gonna lie, for about a minute I thought he couldn’t breathe due to some kind of airway problem and I was just worried about him dying. Thankfully, after some time, it appeared to have just been a contusion and maybe knocked the wind out of him, as he got up and took his base at first.

Scary moment, for sure.

On the other side of things, the offense got started early with back-to-back two-out hits in the first. Justin Turner started it with a double and then Cody Bellinger followed up with a single to plate a run.

In the third, the Dodgers loaded the bases with nobody out behind a double by Chris Taylor, a single by Corey Seager, and JT getting hit on the thigh. Bellinger then came through again with a single to right to score one.

Of course, the Dodgers didn’t get any more after that, which was their problem on the day. They left runners in scoring position in four consecutive innings in the second, third, fourth, and fifth.

Thankfully, they did actually score in the fifth, and Bellinger was involved yet again. Cody singled to start the inning, got to second on a wild pitch, and then scored on a two-out double from Austin Barnes.

At that point things were looking alright despite all the missed chances, as they clung to a one-run lead, but Ross Stripling quickly changed that. While Chicken Strip pitched two innings, struck out two, and only gave up two hits … those two hits were the game-tying and go-ahead homers in the seventh and eighth innings, respectively.

Chicken Strip is doing the most to ensure we won't ever see him wear that jersey.

Of course, he only tried to get two frames to save the rest of the pen because the regular season results are kinda whatever for the Dodgers at this point, but still … not great.

In the eighth, it definitely looked like the Dodgers were on the verge of taking the lead back. After a lead-off walk by Barnes, Yasiel Puig hit a line drive a couple feet short of the wall and Kyle Farmer hit a towering shot to left that fell about a foot short of the wall. On a different night, both of them could’ve been homers, but it was not that night tonight.

Josh Fields was tasked with the ninth and got a 1-2-3 inning, including a strikeout. But the heart of the order in Seager, Turner, and Bellinger went down in order to end the game.

The loss drops the Dodgers to 81-34 on the year and 47-14 at home, both of which are ridiculous. The Rockies lost earlier, so the NL West lead is still 16 games. The Astros lost as well, so the lead for the best record in baseball is 10 games.