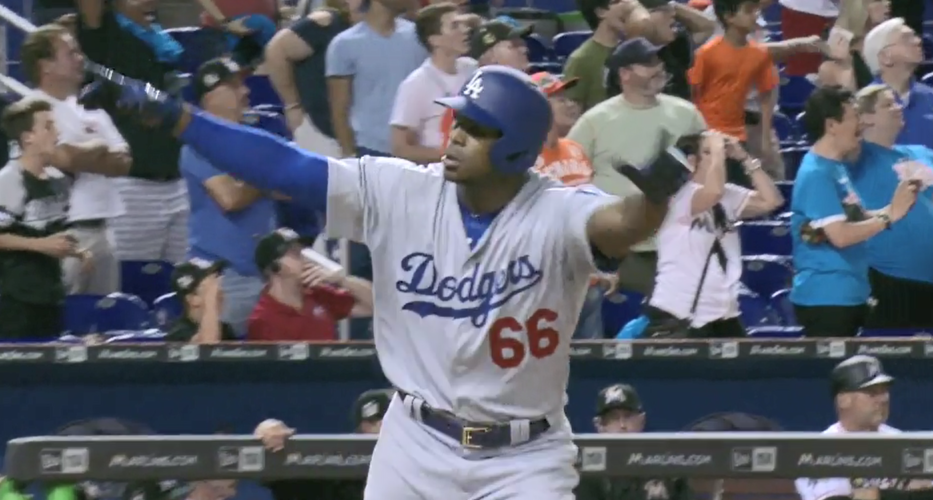 A year ago last night, Yasiel Puig had his best game for the Dodgers — the Oklahoma City Dodgers, that is. He went 3-for-4 with a home run en route to a 6-2 OKC loss to Albuquerque. Fast forward one year and you get last night’s result — a walk-off, 2-run double after Los Angeles Dodgers entered the bottom of the ninth inning down 4-2.

What a difference a year makes.

I wrote about Puig 10 days ago and basically said this is the player he is now — an elite-defending, power-hitting right fielder.

“Puig has enjoyed a bounce-back season, as he has already hit a career-best 21 home runs and is playing elite-level defense in right field. He’s also walking at a better than 10 percent rate while he has seen his strikeout rate dip to a tick under 18 percent. Despite the improvements, his batting average (lol) and on-base percentage haven’t enjoyed similar positive trends. His .258 average would be the second-worst of his career and his .332 OBP is just nine points better than last season. The biggest reasons for this are the fact he’s hitting dongs and, at the same time, getting BABIP’d.”

He hadn’t gotten a hit in eight days (0-for-12, seven walks), so him coming through in the clutch, as so many other Dodgers have this season, wasn’t exactly surprising. That’s the MO of this team right now: Anyone can beat you at anytime, even a guy who has struggled in the clinch.

Puig had a similar chance early this season against Rockies. So in the ninth against Greg Holland, well, just look:

It all went according to plan, except for the fact the ball barely made it to the warning track. So, let’s look at a time the ball went over the fence.

Puig’s heroics were on display in the first game after the All-Star break. He hit a go-ahead 3-run home run of then-Marlins’ closer AJ Ramos to give the Dodgers an eventual 6-4 victory in Miami.

Overall, he has been a much more clutch player this season than in years past. FanGraphs has a statistic appropriately named “Clutch.” Here is Puig’s clutch rating and win probability added in his career:

Still, this is quite a step forward from a player who has gained a reputation for not being terribly reliable in big situations. The postseason comes to mind, where Puig has been less than stellar: .263/.325/.329 with just three extra base hits (a double and two triples). Most alarming is the fact he has struck out 28 times in 83 postseason plate appearances (33.7 percent).

This isn’t exactly a predictor of things to come in October, but Puig has shown an ability to come through when the team has needed him this season. Perhaps, hitting lower in the lineup combined with expectations not sky-high, will help him be successful on baseball’s biggest stage. Just pointing out the numbers appear to coincide, at least a bit, with the good ol’ eye test.

Dustin Nosler began writing about the Dodgers in July 2009 at his blog, Feelin' Kinda Blue. He co-hosted a weekly podcast with Jared Massey called Dugout Blues. He was a contributor/editor at The Hardball Times and True Blue LA. He graduated from California State University, Sacramento, with his bachelor’s degree in journalism and a minor in digital media. While at CSUS, he worked for the student-run newspaper The State Hornet for three years, culminating with a 1-year term as editor-in-chief. He resides in Stockton, Calif.
@DustinNosler
Previous Dodgers 5, White Sox 4: 3-run 9th inning rally ends with Yasiel Puig walkoff double
Next Dodgers have built baseball’s deepest catching corps