Alex Wood’s velocity is down; it’s concerning and the cause of his issues 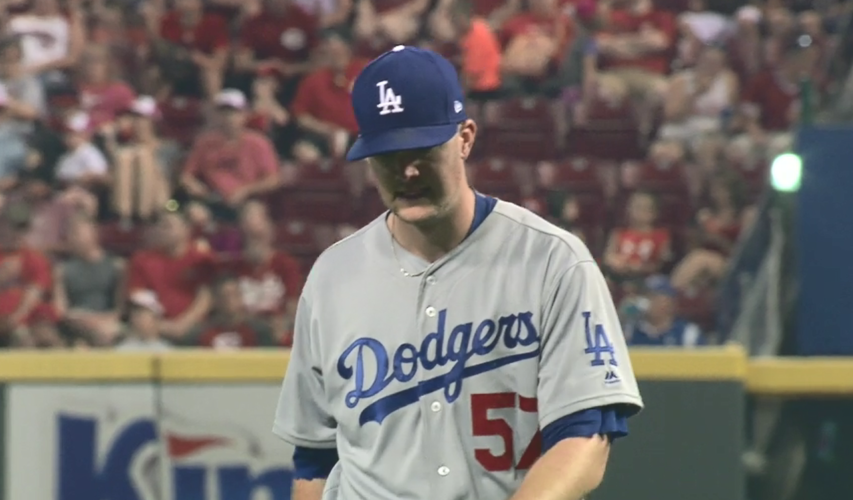 Alex Wood turned in another quality start in Pittsburgh on Monday — his 12th of the season. Despite that, the start was still a bit worrisome for his season and for the Dodgers.

He allowed three solo home runs, which isn’t like him, because coming into the game he had allowed just seven home runs in 117 1/3 innings. Not only that, his ground ball rate has been trending the wrong direction.

Worrisome trends for sure. These negative trends can be traced to the location of his sinker/2-seam fastball.

In the first half, he kept the ball down in the strike zone well.

The second half, though, the location of his sinker is much higher in the zone.

This could be for a number of reasons, but the one that makes the most sense is fatigue. Wood himself even said he was fatigued. He then threw a bullpen a couple Sundays ago and the life had, allegedly, returned to his fastball. However, his two starts following that bullpen session hasn’t really given credibility to Wood’s claim that fatigue was not the cause of his velocity drop.

And here it is in chart form, if the table wasn’t concerning enough. 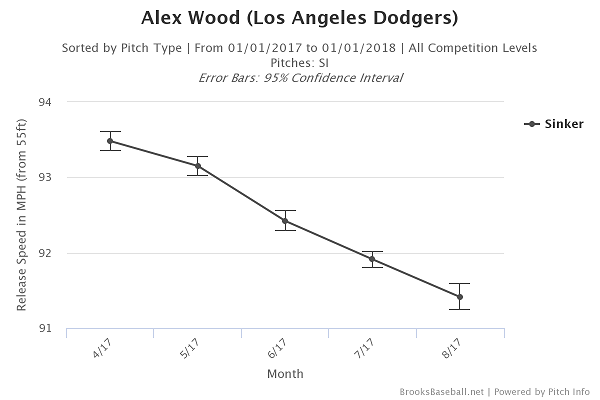 Because of the diminished velocity, his sinker becomes much more hittable (like any fastball), especially if they are higher in the strike zone. He can get away with throwing sinkers a little higher at 92-94 MPH, but they’re going to get pounded if they’re in the 89-91 range. And that’s what has been happening in his recent outings.

His release points have differed significantly from the first half (more clustered) to the second half (less clustered and smaller).

Still, this a testament to his ability and talent that he has still been successful despite his velo drop and inconsistent release points. But he hasn’t been the pitcher we saw in the first half. You know, the kind of pitcher we thought would make it OK for the Dodgers to pass on adding a starting pitcher at the trade deadline (thankfully, they didn’t).

All this information is from before Monday’s start. I’m not including that start because, well:

And if you want the numbers from Monday’s start, here you go:

Unless he has been hiding this injury again, the velo issues laid out above are still valid (especially since Monday was a season-low in average sinker velocity).

If this doesn’t send Wood to the 10-day disabled list, I’m not sure what will. As long as he isn’t seriously hurt (i.e., if it’s like last time), the best thing might be for Wood to get a little rest over the final six weeks of the season. It could help him recover from this latest flare up and also lead to his velocity coming back.

That said, if Wood’s velo doesn’t come back as a starter, I’m not sure how confident I’d be (or the Dodgers would be) rolling him out in a playoff game. He might not be able to go more than 3-4 innings if he’s dialing up the velocity. If that’s the case, he might be better off coming out of the bullpen as a relief ace-type (where his stuff and velo would, in theory, play up). That would also mean committing to Kenta Maeda, Brandon McCarthy or Hyun-Jin Ryu starting a playoff game, as the Dodgers will not throw Clayton Kershaw on short rest (outside of a World Series-clinching situation) this postseason. That’s why they acquired Yu Darvish. Still, that’s a terrifying proposition on its own.

There’s a lot that can happen in the next six weeks. Wood missing a start or two wouldn’t be the end of the world and might actually help him get back to being the pitcher he was in the first half. There’s no guarantee that would happen, but it couldn’t hurt to try.

Dustin Nosler began writing about the Dodgers in July 2009 at his blog, Feelin' Kinda Blue. He co-hosted a weekly podcast with Jared Massey called Dugout Blues. He was a contributor/editor at The Hardball Times and True Blue LA. He graduated from California State University, Sacramento, with his bachelor’s degree in journalism and a minor in digital media. While at CSUS, he worked for the student-run newspaper The State Hornet for three years, culminating with a 1-year term as editor-in-chief. He resides in Stockton, Calif.
@DustinNosler
Previous Dodgers 6, Pirates 5: Yasiel Puig homer in the 12th proves to be the difference
Next Dodgers @ Pirates August 22, 2017: Stewart vs. Taillon; Wood, Bellinger to DL