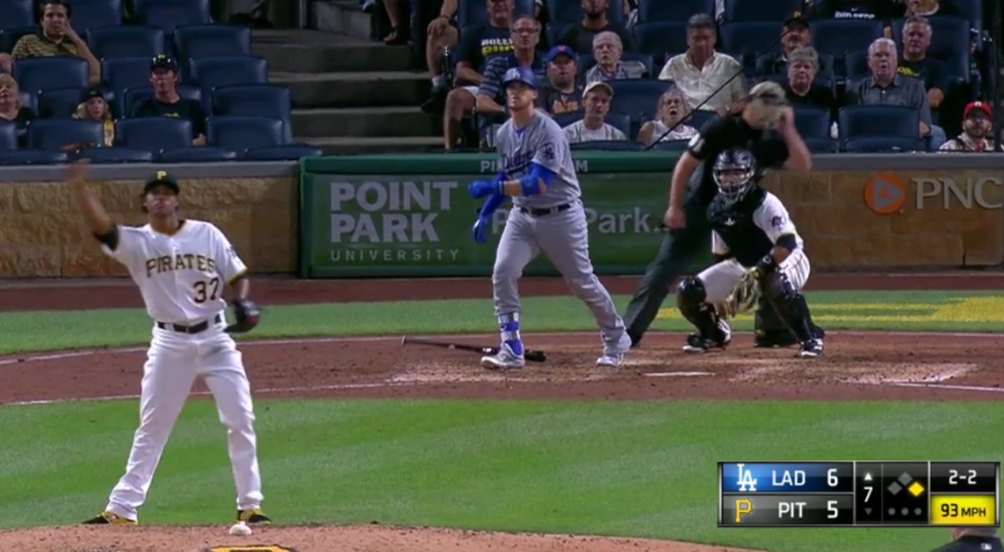 The Dodgers have placed basically their entire team on the DL … and it doesn’t seem to make much of a difference. Today they beat the Pirates, 8-5, in what basically turned into a pen game, just because they can.

It’s when they win games like these that you realize how deep the team is.

The bats did something it seems like they haven’t done much of recently: jump out to an early lead. Chris Taylor started the game with a lined double to left, and the Dodgers manufactured a run via back-to-back ground outs by Corey Seager and Justin Turner.

The offense got right back to it in the second, with Yasiel Puig singling with one out and then both Adrian Gonzalez and Logan Forsythe drawing walks to load the bases. That set the table for pitcher Brock Stewart, who flared a single into left for a run.

CT3 then followed with a single that found a hole in the left side of the infield to plate two more.

Unfortunately, all that early work didn’t amount to much after Stewart’s disaster of a third inning. Stewart got through two scoreless, but then gave up five runs in a tire fire of an inning that ended up giving the Pirates the lead. Stewart exited the frame without getting an out, surrendering four hits and four walks on the night.

Josh Ravin was brought in for relief and immediately gave up a double and a ground out that scored all three runs he inherited (charged to Brock Brock), but settled down with two strikeouts (with an intentional walk sandwiched between) to escape without it getting any worse. Ravin also pitched the fourth, notching a 1-2-3 inning with a strikeout.

Tony Watson was then brought in once again to face his former team and was sharp, getting a 1-2-3 inning on nine pitches, eight of which were strikes.

The pen did well enough to give the offense time to retake the lead. In the fourth, they tied things up on a Taylor infield single that drove in a run, eventually taking the lead on a Seager single to right that plated one.

The Dodgers got insurance in the seventh when Curtis Granderson led off with a walk and then Yasmani Grandal followed with a two-run bat drop to deep center.

When you see the bat drop, you know it's gone. 💯 #LetsGoDodgers pic.twitter.com/QqQg6mGK9P

Eight runs on 10 hits (two doubles and a homer) and seven walks was nice to see from an offense missing Cody Bellinger.

That proved more than enough for a bullpen that was on their game today. Tony Cingrani had his best outing as a Dodger, surrendering just two singles in two scoreless innings of work, striking out two batters and even picking off a runner. Josh Fields walked a batter, but stuck out one in a scoreless inning of his own.

That set things up for Kenley Jansen, who entered with a three-run lead. That’s basically cheating, honestly, and he showed why by striking out the side on 14 pitches.

This @kenleyjansen74 strikeout is legen— wait for it —dary. pic.twitter.com/4gd9Poknpn

A-Gon reached 2000 hits, but most importantly he’s making a ton of hard contact.

89-35 on the season and 38-21 away from home. The Diamondbacks won and the Rockies are still playing, so they’re both tied for second in the NL West right now at 21 games back. The Astros are still in progress, meaning they are temporarily 13 games back for the best record in the MLB.