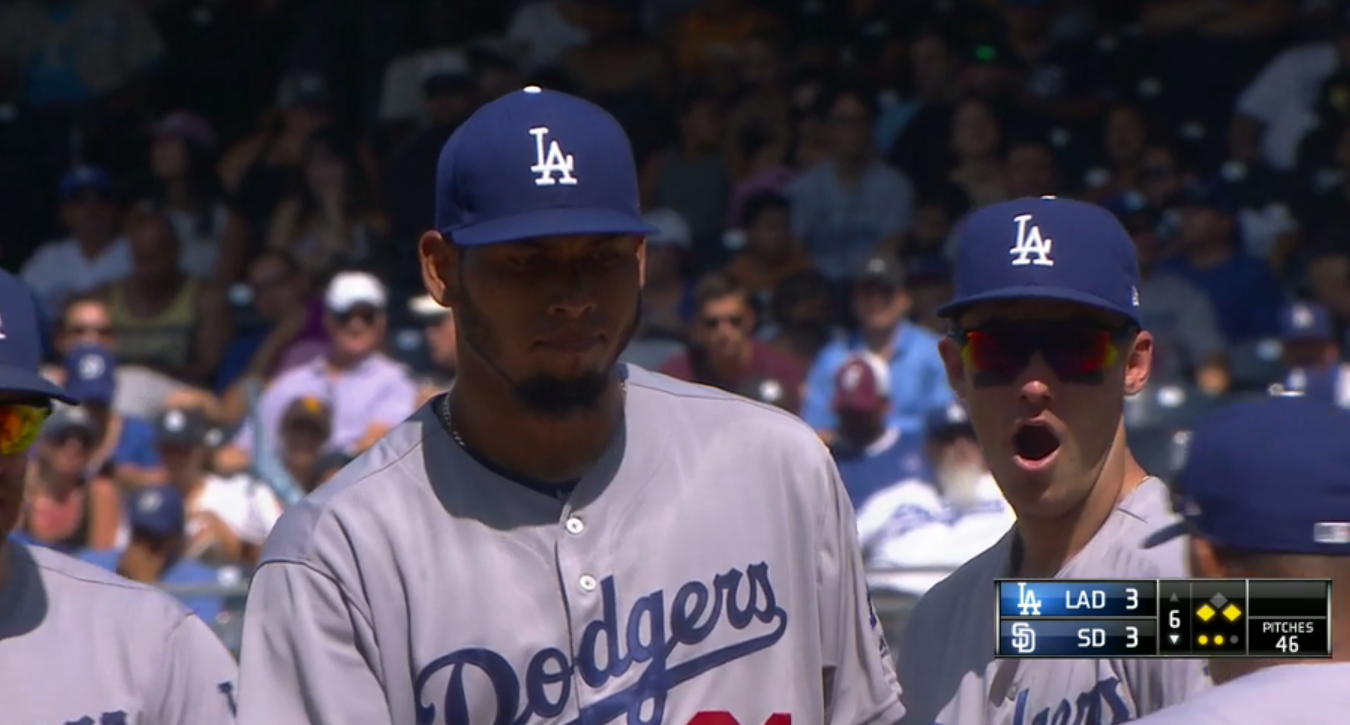 The Dodgers have a doubleheader today against the Padres, so in Game 1 they decided to run out … well, the Oklahoma City Dodgers.

Me: "Ah, losing streak over. Time to get serious down the stretch."
Dave Roberts: https://t.co/9YCMLlfCEt

That carried over to the pitching staff, and while they gave it a decent effort, it unfortunately fell short in a 6-5 walk-off loss.

Brock Stewart was given the nod, and he struggled to find his release point all game. When he was right, Stewart looked good, striking out five and limiting the Padres to two hits and one run (sac fly). When he was off, Stewart looked like every other pitch could’ve been parked for a homer and he walked four batters (one intentionally). Luckily it was only a spot start, and he gave the Dodgers four innings on 72 pitches.

Wilmer Font was then called on to make his debut with the Dodgers, and it went less than ideal. He labored through 46 pitches, and he got just five outs while surrendering two runs on two hits and three walks over 46 pitches. Font left runners on first and third for Edward Paredes to clean up, and he did just that with a strikeout after a 10 pitch battle to escape the inning.

Unlike in previous games, the offense got started early in the first, with three consecutive singles by Logan Forsythe, Austin Barnes, and Enrique Hernandez leading to a bases loaded RBI from Cody Bellinger on a ground out. Unfortunately, that was all they got out of that situation.

Bellinger also gave the Dodgers a run in the fourth, when he led-off the inning with a bomb to right.

A swing of beauty. pic.twitter.com/nyjrW29yrt

Chris Taylor pinch hit in the fifth and doubled, eventually coming home on a Barnes single to the opposite field.

Josh Ravin was tasked with keeping the score tied in the seventh. He did not do that, issuing a walk, a triple, and a single for two runs. Ravin got through the inning, but the damage was done. Tony Cingrani was then summoned to get the eighth, and he got an easy 1-2-3 frame, which probably proved more important than anybody figured at the time.

Why? Cause after Rob Segedin started the ninth with a bloop double, Justin Turner crushed a two-run homer to tie the game at five apiece.

Pedro Baez then did what Baez is best at: giving up high leverage dongs. With one down in the ninth, Yangervis Solarte crushed a Baez fastball and ended the game.

The magic number is still 13.