Giants 8, Dodgers 6: This is their lives now 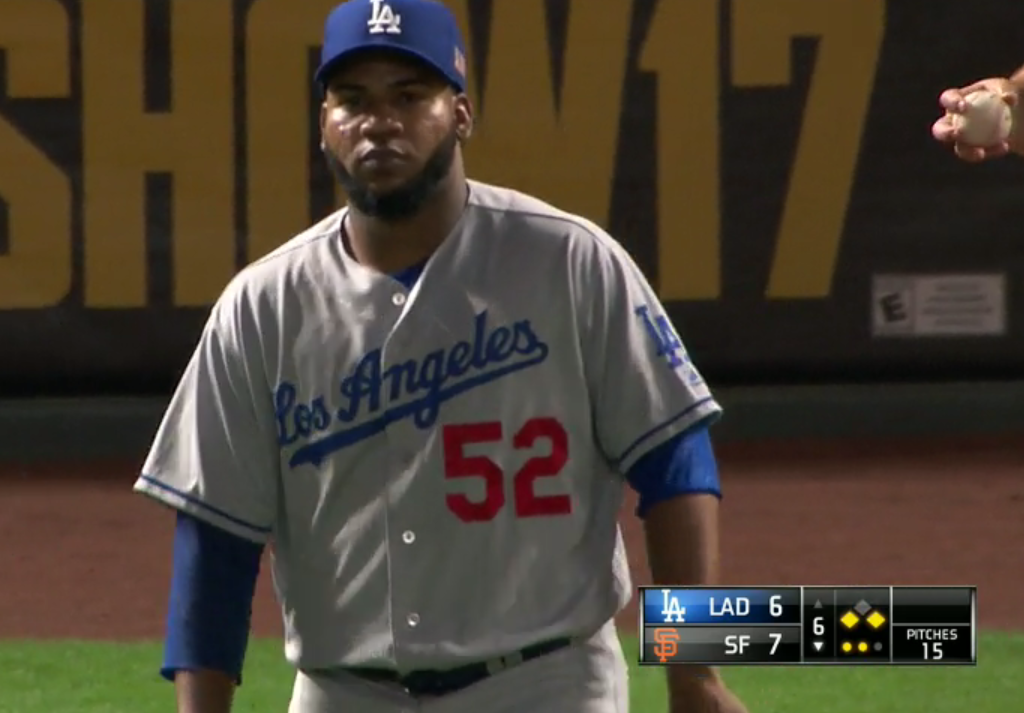 Hello to everybody who stayed up with me to watch this terrible game. I regret to inform you that the Dodgers have lost again, this time to the Giants, 8-6. The offense showed fight and the manager showed urgency … and nothing else went right.

After a rain delay of about 40 minutes, Giants starter Chris Stratton took the mound and struck out Curtis Granderson to get things started … then it started absolutely pouring and the game went back into a rain delay.

Ty Blach took over for Stratton, and while he completed the first and got through the second and third without allowing a run, the Dodgers managed to put up a crooked number in the fourth. Cody Bellinger and Yasiel Puig reached on back-to-back singles, and the bases were loaded with one out after Yasmani Grandal drew a walk. Logan Forsythe then jumped on the first pitch for a clean single through the left side of the infield for a run.

In a move that shows a bit of the urgency everybody wanted, Dave Roberts pinch-hit for starter Kenta Maeda in the third, inserting Chris Taylor into the game. The move paid immediate dividends, as Taylor blooped a single to center to drive in another run.

The bases were still loaded, of course, and with two down Corey Seager came through with a line drive single just over the infield to drive in two more.

Unfortunately, that rally only tied the game. Maeda, tasked with being a rotation member to not shit the bed, couldn’t prevent a terrible Giants lineup from scoring. He surrendered a two-run homer in the first, a solo homer in the second, and an RBI ground out in the third (after Puig misplayed a fly ball in right, to be fair) to give the Giants an early lead, lasting just 47 pitches and three innings. Maeda surrendered his four runs on just four hits and no walks while striking out four, but that’s what happens when you give up dingers.

Meanwhile, the offense kept at it, and good guys took the lead in the fifth when Puig led the frame off with a solo dong, his 25th of the year.

That was short lived, however, due to more bullpen struggles. Luis Avilan got two outs in the fourth, allowing just an infield single before being relieved by Josh Ravin. He notched a strikeout to get out of inning, but was left in to protect the lead in the fifth and gave up a walk and an infield single, which is when Tony Cingrani entered to put out the fire. He did not do that, however, as after a sacrifice bunt, a clean single to center and an infield roller for a single scored two runs to give the Giants the lead before Cingrani got out of the frame with a double play.

Again the Dodgers fought back, this time with a two-out rally in the sixth, started with a Seager walk and completed by a Justin Turner double into the left-center field gap.

Unfortunately, Pedro Baez took over in the sixth, and he allowed three hits in his inning, which scored the go-ahead run for the Giants yet again. It was all just less than ideal despite the fight. Tony Watson got the seventh frame for the Blue, and he promptly dug the offense a deeper hole by promptly issuing a walk and a double to plate a run. Watson got the next two outs before giving way to Josh Fields, who got the last out of the inning to escape further damage. Fields also got the eighth in 1-2-3 fashion, the only time the staff managed to do that in the game.

Is that good? I don’t think that’s good.

While the offense rebounded with six runs on eight hits (one double and one homer) and seven walks, they couldn’t mount one last comeback. They also did waste chances, like leaving the bases loaded in the fourth with two outs and stranding runners at first and second with two outs in the sixth and seventh innings. Like with so many other games during this stretch, it just wasn’t enough.

92-52 on the year and 40-29 on the road. The Diamondbacks lost at least, so the NL West lead is still at 9 games and the magic number is down to 10. The Nationals did not play today, so the lead for the best record in baseball is down to 3.5 games.