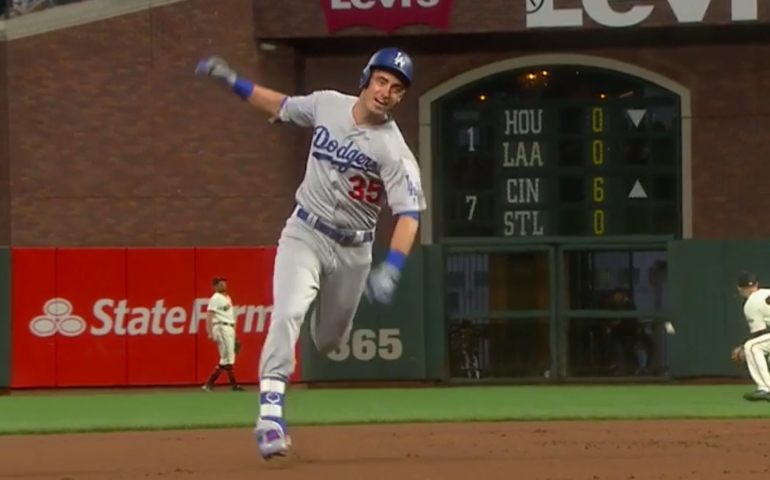 After ending their 11 game losing streak last night, the Dodgers ended their five series losing streak tonight with a 4-1 victory over the Giants.

Yu Darvish looked like the guy they traded for, as Cody Bellinger and his wet dong gave him breathing room.

The concern over Darvish was always less about his raw stuff and more about whether he could throw it over the plate. Well, whatever mechanical issues he’s been working on seemed to have taken today, as he generally looked in command of his pitches and attacked hitters.

While his fastball velocity was down a tick to 92-94 mph from a usual 93-96 mph, he also wasn’t missing the glove with most of them either. That seemed to make most of the difference, as Darvish went seven scoreless innings and struck out five, surrendering no walks and just three singles.

It probably helped Darvish that the bats got off to a quick start in the first. After Corey Seager reached after being hit, Bellinger came through with a triple to right.

Logan Forsythe followed that by immediately doubling into the left-center field gap to plate another.

After a three-inning hibernation, the offense got back on the board in the fifth. Justin Turner started the inning with a double, and Bellinger followed by absolutely annihilating his 37th homer of the season out of the stadium and into the water.

The offense didn’t actually have a good night, as they managed just six hits and five walks, but it certainly helped that those hits were all for extra bases (four doubles, a triple, and a homer).

That was enough. Brandon Morrow entered for the eighth with a comfortable four-run lead, and he set the Giants down 1-2-3 with a strikeout. Walker Buehler, coming off a disaster of an appearance, then entered for the ninth. Buehler got two consecutive weakly hit grounders for outs to start, and then got a big chopper back to him that resulted in an infield single when he didn’t get the throw completely right. After the runner advanced to second on defensive indifference, he then allowed a jam-shot grounder down the line for a single to score a run, but he rebounded with a strikeout to end the game.

94-52 on the season and 42-29 on the road. The Diamondbacks won, so the NL West lead is still 10 games but the magic number is down to seven. The Indians won their 21st straight game, so the lead for best record in baseball remains at four games.