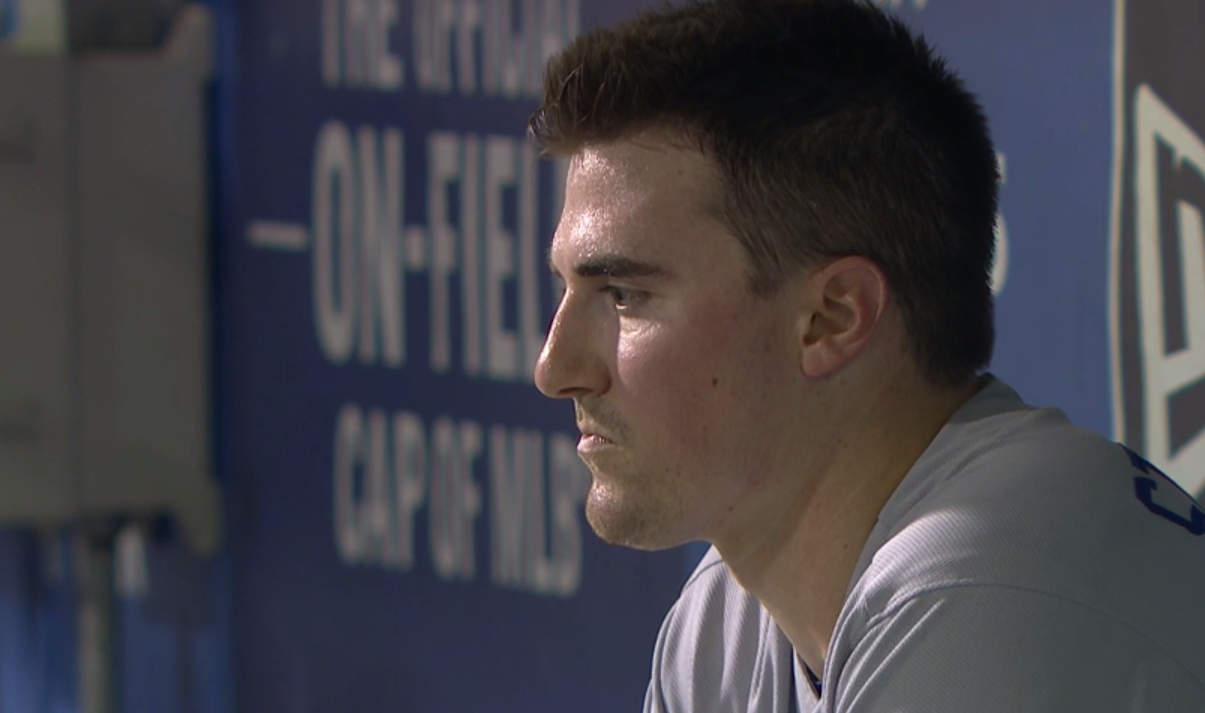 After dropping tonight’s contest 7-5, the Dodgers have now lost the first three games of the series to the Phillies and four games in a row.

Alex Wood‘s scoreless outing last time out against a powerful Nationals lineup was promising after his struggles, and while he gave up runs to the Phillies, this start was definitely another step forward. Wood surrendered two runs in six innings tonight, with both coming in a second inning during which he allowed two singles and a double. However, those were all the hits he allowed in his 82 pitches, and he didn’t surrender any free passes either.

Wood finished his start with 10-to-2 ground-ball to fly-ball ratio, and he retired the last 13 Phillies he faced. This is the version of Wood the Dodgers need in the playoffs.

Chris Taylor got the scoring started for the Dodgers in the third, smacking his 21st dong of the season, a solo shot to right.

After a vacation of sorts, the offense came alive again in the seventh. Chase Utley led things off with a stand-up triple, and Enrique Hernandez pulled a pinch-hit double down the line in left to tie the game.

With two down later in the inning, and after an intentional walk to Justin Turner, Cody Bellinger came up big with a double down the line in right to score two and give the Dodgers the lead.

Unfortunately, that’s when Ross Stripling happened in the seventh. He proceeded to walk the first batter he faced, then surrendered a game-tying homer to Aaron Altherr, recorded an out on a grounder hit so hard it almost killed JT at third, then gave up the go-ahead homer to Tommy Joseph. While Stripling is good for what he is (starting depth and swingman), a back-end bridge to Kenley Jansen is not the right role for him. Anyway, Tony Watson had to enter in relief for Stripling, and he recorded two quick outs to finish the inning without further mess.

Despite that incredibly demoralizing sequence, the Dodgers battled back in the eighth again behind Austin Barnes, who started the eighth with a walk, advanced to second on a ball in the dirt, and then got to third on a passed ball. Eventually Barnes scored on a grounder to first from Utley, as he beat the throw home and then beat the catcher to home plate.

Next up in the bullpen humiliation tour was Luis Avilan, who started the eighth with a walk, then threw away a bunt back to him to put runners on second and third. Avilan then miraculously got an out on a strikeout and issued an international walk before being removed for Brandon Morrow. There was no relief to be found, however, as Morrow gave up a two-run double (Avilan’s runs) before notching a strikeout and a fly out to escape without further damage.

Sadly, the Dodgers didn’t have one last rally in them, going down 1-2-3 in the ninth.

96-56 overall is very good, but very bad considering where they were. They are also now 44-33 away from home. The Diamondbacks are currently playing the Padres, and the NL West lead is down to nine games and the magic number remains at two. The Indians are also playing right now, and the lead for the best record in baseball is all the way down to 1.5 games.