Dodgers 5, Phillies 4: No sweep in Philly thanks to Ethier’s pinch-hit game-tying dong 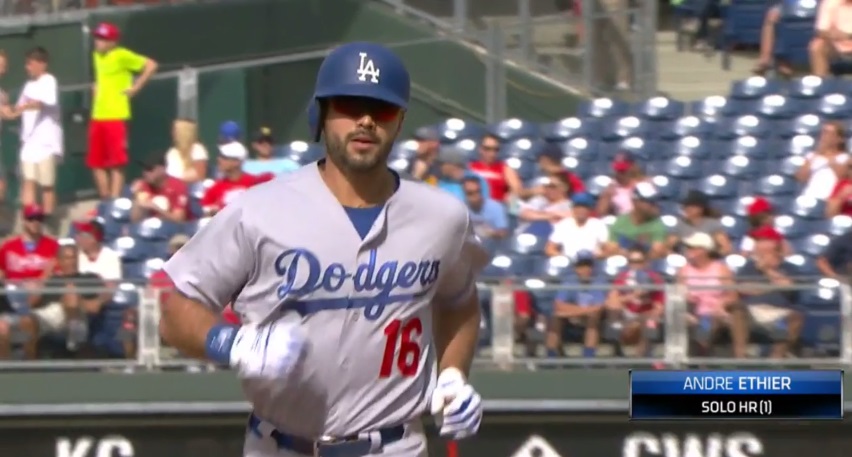 The Dodgers avoided a four-game sweep at the hands of the last-place Phillies Thursday afternoon and snapped their losing streak, but it wasn’t an easy task. It was a back-and-forth affair that saw the lead change multiple times. The offense finally came through, highlighted by a pinch-hit game-tying home run in the top of the seventh inning by Andre Ethier.

Kenta Maeda took the mound in the first inning with a one-run lead to work with thanks to a Yasiel Puig RBI sacrifice fly that came after Chris Taylor ended up at third base on a single and a two-base throwing error by Aaron Altherr to start the game. However, there was a scary moment when Mark Leiter hit Justin Turner with a pitch in the chest and right hand. He looked like he was in considerable pain, and the trainers came out to check on him. Turner remained in the game for some reason. It’s the last thing the Dodgers need with Corey Seager nursing a sore ankle on the bench.

Justin Turner ties Alex Cora‘s LA Dodgers record with his 18th HBP of the season, and it looks painful

On the other side of things, the Phillies loaded up the bases with two outs against Maeda in the home half of the first, but he was able to strike out Odubel Herrera on a 3-2 count to escape the inning unscathed. Maeda did make 31 pitches in the inning and walked two but ended up striking out the side. Home plate umpire Scott Barry made a questionable call on the leadoff walk to Cesar Hernandez but made up for it on the called strike three on Herrera.

Cool from Dodger broadcast showing overlays of a just-missed Maeda pitch & a called strike 3 — and good umping on it as well. pic.twitter.com/IRaAnqo9NQ

What else can go wrong? Turner came out of the game in the bottom of the second inning to get a X-ray on his right hand. Defensive shuffling ensued: Logan Forsythe slid over to third base, Taylor to shortstop, Cody Bellinger to center field, Chase Utley to first base, and Austin Barnes entered the game to play second.

Justin Turner bruised his right thumb. The X-rays were negative. You can exhale, I suppose.

The Dodgers notched a second run in the third with a little help from the Phillies. Rhys Hoskins couldn’t handle a ball hit by Curtis Granderson to short, and the Dodgers cashed in after consecutive singles with two outs from Bellinger and Puig. Alfaro also apparently stepped on Bellinger’s hand as he slid into home. Swell.

Speaking of not-so-great feelings, the Phillies tied up the game on a two-run home run by Nick Williams in the bottom of the third. Maeda’s line after three innings: 2R, 3H, 3K, 2BB on 61 pitches (36 strikes). Expect Maeda to transition to a bullpen role during these final regular season games.

A two-run double from Hoskins off Josh Fields then gave the Phillies their first lead of the game in the fifth. Thankfully, Curtis Granderson cut Philly’s lead to one with a solo shot in the sixth.

Yasmani Grandal then came within inches of tying the game up thereafter with a near homer, but he had to settle for a two-out double. Perhaps he’s not the worst player to ever play after all and actually one of the best catchers the Dodgers have had in years.

In the seventh, Andre Ethier stepped up as a pinch-hitter and channeled his inner Captain Clutch, smashing a solo home run off Ricardo Pinto to tie up the game 4-4. Did you forget about Dre? He’d like to remind you that he’s hitting .320/.370/.600 with two home runs since making his 2017 debut this month.

Taylor then proceeded to do what he does best, he tripled (5), and Bellinger got the job done with a RBI ground-out to give the Dodgers a 5-4 lead.

The Dodgers’ bullpen was generally effective today, a welcome and refreshing effort. Other than the two runs Fields allowed in the fifth inning fueled in part by Chase Utley‘s throwing error, Luis Avilan, Walker Buehler, Brandon Morrow, Tony Cingrani and Kenley Jansen all did their part. Buehler picked up his first career MLB win as well.

The Dodgers are now 97-56 and 45-33 away from home. The Diamondbacks are idle today, so the magic number drops to one. The lead for the best record in baseball is still 1.5 games over the Indians who are currently playing the Angels.

Stacie Wheeler, born and raised in So Cal, has been writing about the Dodgers since 2010. She wrote daily as the co-editor of Lasorda's Lair for five long years, and she has also written for Dodgers Nation, Dodger Blue 1958 and The Hardball Times. She currently contributes to True Blue LA. Stacie graduated from the University Of Southern California with a bachelor's degree in Cinema-Television. You can also watch her videos on her YouTube channel, DishingUpTheDodgers.
@StacieMWheeler
Previous Dodgers @ Phillies September 21, 2017: Seager sits with sore ankle in series finale
Next A brief appreciation of Kenley Jansen and his awesomeness