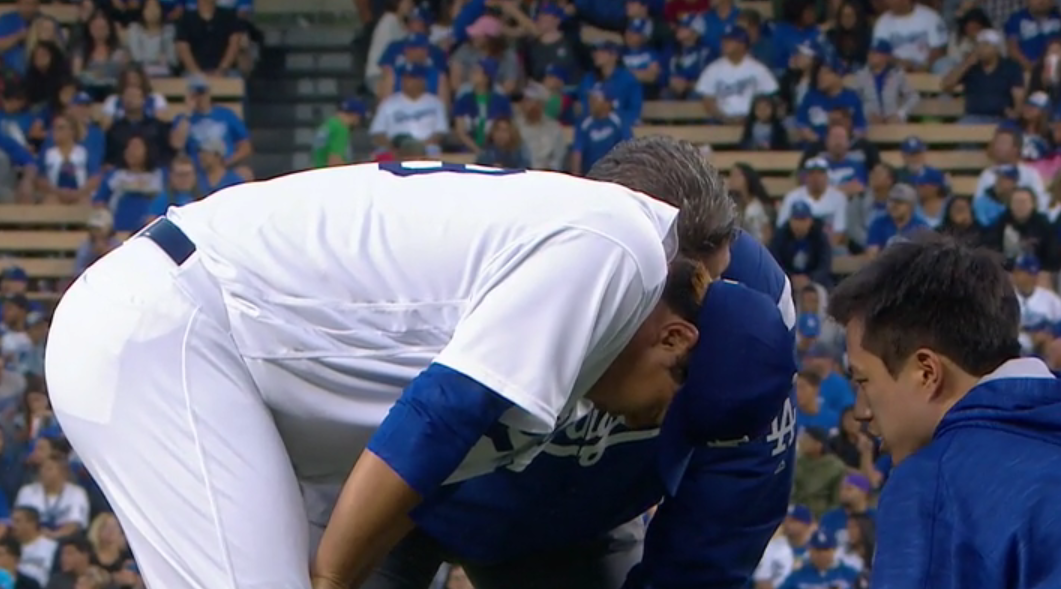 After winning two games in a row and clinching their fifth NL West title in a row, the Dodgers finally had the momentum back! But after tonight’s 2-1 loss to the Giants, I regret to inform you that they are doomed again.

Hyun-Jin Ryu gave up just a single run in today’s start, which would seem like it’s a positive, but he only lasted 2.1 innings. In the third, Ryu was hit by a line-drive comebacker on what appeared to be the left forearm and had to exit the game.

Ross Stripling completed the inning for him, getting the final two outs on eight pitches, but obviously the concern was Ryu’s health.

Brandon McCarthy then made his first appearance since July 20, allowing a run on two hits in three innings, striking out two batters. Pedro Baez, fresh off his sabbatical in the dugout, gave up a double but otherwise got a scoreless frame himself.

Walker Buehler then put himself in a situation that tested his mettle, allowing back-to-back ground singles (meh) and issuing a walk to load the bases with nobody out. However, he proceeded to get an important strikeout and then induce another grounder, except this one went for a 6-3 double play to escape the threat without damage.

Regardless, the problem was the offense didn’t do much against Madison Bumgarner. They didn’t get a single runner into scoring position through six, and got just five hits and a walk in the 7.2 innings he was on the mound. However, Austin Barnes did start the eighth with a solo shot, his seventh on the season.

Tony Cingrani was brought in to keep the lead at one in the ninth, and despite issuing a walk, he did his job by keeping the Giants off the board.

Didn’t matter much, however, as the Dodgers went down scoreless in the ninth and the Giants bullpen gave up just a single in their 1.1 innings of work. The game ended on a Yasiel Puig caught stealing, which was a bit weird since Puig seemed to pull up early, and it’s important that he’s not seriously hurt.

98-57 overall and 53-24 at home. With the Indians winning, the lead for the best record in baseball is down to a single game.