Revisiting my ‘5 bold predictions’ for the 2017 Dodgers 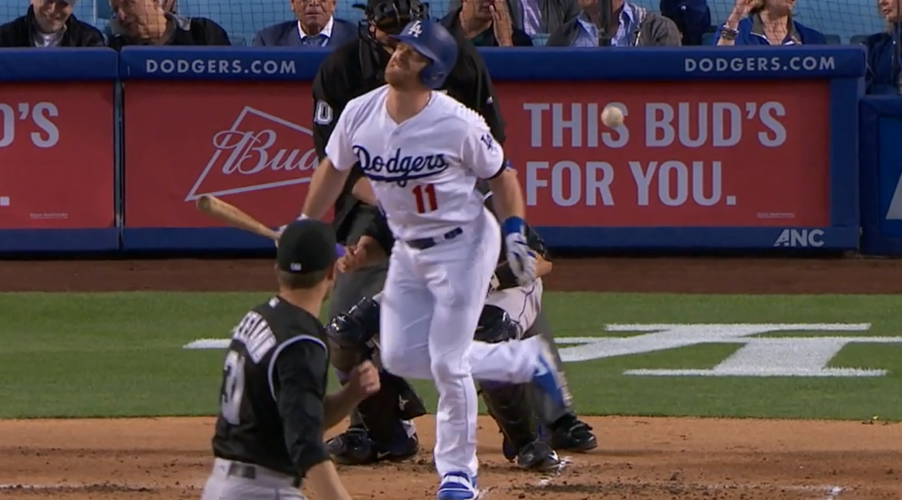 I made what I thought were five bold predictions for the 2017 Dodgers’ season way back at the end of March. Now, it’s time to look back and see how incredible foolish I was.

There are really six bold predictions, if you count this one.

Prediction that's sure to make me look silly: Joc Pederson is going to hit 33 home runs in the 2017 season.

Swing and a miss, much like Joc Pederson. Things started off well enough as he hit a grand slam on Opening Day. Then, things went downhill. He hit just two home runs in the first two months of the season and ended up on the disabled list. He came back strong in June to hit six home runs and it looked like he was on his way back. A solid July gave hope that there could be a strong close to his season coming, but he hit .102/.254/.169 with a 28 wRC+ to close the season. It also included a trip to Triple-A Oklahoma City that saw him produce a 35 wRC+. It was a bit of a lost season for Joc.

1. Trayce Thompson will hit 20 home runs in the majors

Oops. I was all aboard the Thompson bandwagon despite coming off a fractured back. It isn’t like he lit up the Cactus League (.674 OPS), it was more of a gut feeling based on what he had done — when healthy — in 2016.

Instead, Thompson struggled in both the minors and majors. He went 2-for-52 in the minors in April and 0-for-8 in the majors. His first and only home run at the MLB level came on June 28 against the Angels. There’s always next year, I guess.

2. Ross Stripling will be the second-best reliever (by WAR) on the team

For a time, this looked like it would come true. Stripling was a fixture in the bullpen from Day 1. He pitched the most innings of any Dodger reliever in 2017 (69 1/3) and accumulated a 0.5 wins above replacement. Here’s how it shook out:

He posted some other solid peripherals as a reliever (.299 wOBA, 18.3 K-BB%, 3.77 FIP), but he got bitten by the home run ball pretty significantly (1.3 HR/9, 10 HR allowed). That hurt his second half performance. But, it was still a solid season by a reliever making near the MLB minimum.

3. The left field platoon will produce at least 3 wins above replacement

I think I may have nailed this one, thanks to Chris Taylor. Since FanGraphs doesn’t keep position-specific offensive stats, that’s why you’ll see Cody Bellinger listed as a left fielder. And other than Andrew Toles (0.5 fWAR), no left fielder posted a WAR better than 0.

Taylor had almost an even split between between left and center field in terms of innings played — 405 2/3 vs. 395 — and plate appearances — 206 vs. 201. And while position splits aren’t the most reliable set of statistics, Taylor hit a lot better when he played left field:

So while there isn’t a precise number in terms of WAR, I’m sure he contributed more than enough to get the position to the 3-win threshold.

4. Hyun-Jin Ryu makes only 10 starts for the Dodgers

Looking back, this wasn’t really that bold a prediction. It would have been much bolder to say Ryu would make 20 starts after a cautiously optimistic spring training. Ryu ended up hanging in there for 24 starts (122 2/3 IP) and gave the Dodgers — at times — some quality innings.

Now, Ryu is a strong candidate to earn a postseason roster spot on the National League Division Series roster (thanks partly to Alex Wood‘s diminished velocity/effectiveness). If you had told me that before the season, I’d have thought the Dodgers won 84 games and just squeaked into the playoffs because I didn’t think he’d ever get back to his 2013-14 form (and he probably won’t). Still, it was a great storyline to follow after a couple years of frustration for Ryu.

I can, unequivocally, say I nailed this one. Forsythe was the Dodgers’ biggest off-season acquisition, and he ended up with 439 plate appearances. When I made the prediction, Forsythe had come off consecutive years in which he had 615 and 567 plate appearances, and I actually expected Forsythe to be closer to his last two seasons in terms of production rather than the massive struggle he experienced for most of the season.

Despite his struggles, he was almost a league-average player at 1.7 WAR, thanks to some strong defense at second — (9.2 UZR/150, 5 DRS) and third base (20.1 UZR/150, 4 DRS). He still had a 90 wRC+ overall because he hit lefties well — something the Dodgers acquired him to do — so it wasn’t all lost. It’ll also be moot if he has a strong postseason performance.

And a bonus prediction…

The Dodgers will make it to the World Series in 2017

Dustin Nosler began writing about the Dodgers in July 2009 at his blog, Feelin' Kinda Blue. He co-hosted a weekly podcast with Jared Massey called Dugout Blues. He was a contributor/editor at The Hardball Times and True Blue LA. He graduated from California State University, Sacramento, with his bachelor’s degree in journalism and a minor in digital media. While at CSUS, he worked for the student-run newspaper The State Hornet for three years, culminating with a 1-year term as editor-in-chief. He resides in Stockton, Calif.
@DustinNosler
Previous Dodgers 6, Rockies 3: Dodgers finish winning 8 of their last 10 games
Next Podcast: ‘Dugout Blues’ episode 216 – Season recap, postseason roster, prospects