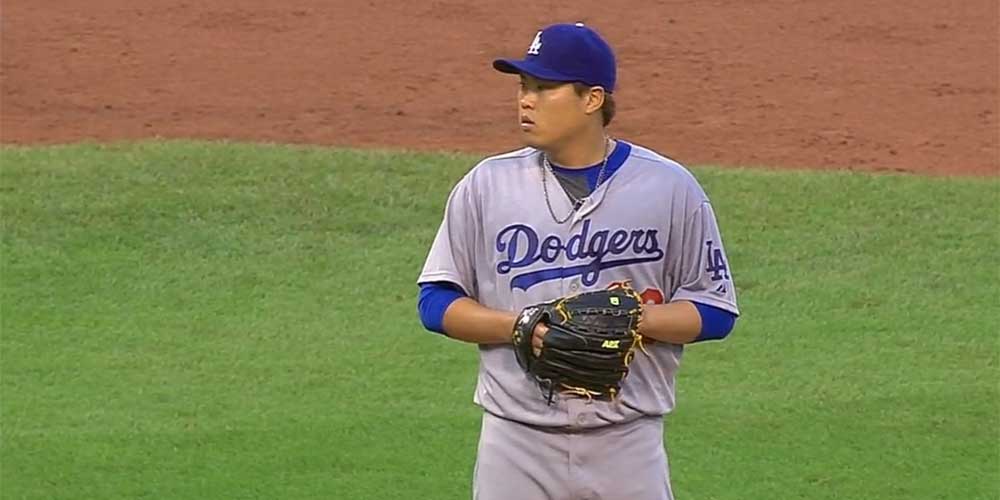 Since Dave Roberts has been hesitant to name Alex Wood a starter in the playoffs, folks have been concerned about Hyun-Jin Ryu‘s potential effectiveness in a No. 4 starter role. While Ryu hasn’t yet been named to the roster, it seems like a strong possibility that he will make the cut.

Chad wrote about having Ryu over Wood in the rotation just last week.

“Starting Ryu over Wood really has less to do with arguing one over the other and more to do with how to maximize the amount of talent on the playoff roster. As has been well-documented by now, Ryu has had an arduous and miraculous road back from surgeries on his throwing arm, and it now takes him a while to prepare to throw a baseball competitively. This reality would appear to make him a starter or nothing for the Dodgers, and leaving a talent like him off the roster would definitely be a negative. By coincidence, Wood has a history of coming out of the pen and being dominant (Career: 2.52 ERA/2.34 FIP/27.3 K%/7.1 BB%). Thus, if the two are interchangeable right now as starters, it would make sense to put Wood in the pen and use him as a multi-inning relief ace of sorts, something the Dodgers could use.”

Can’t disagree with any of that. Throw in the fact Ryu has one relief appearance in the majors (this season) and 10 in his seven seasons in the Korea Baseball Organization. Also consider the fact Ryu will not be asked to pitch deep into games, no matter if the Dodgers are playing Diamondbacks or the Rockies — you know, if he does indeed make the National League Division Series roster.

“Because of that, in the 2017 playoffs, you’re going to see the fully-realized evolution of postseason pitcher usage at a new level. Get used to the terms “bullpenning,” “piggybacking” and “times through the order penalty,” and forget the terms ‘starter’ and ‘reliever.’ Postseason baseball often doesn’t resemble regular-season baseball, and that’s never going to be more true than this October. You’ll see short starts by big names, but they won’t be by accident. They’ll be by design.”

This was on full display in last night’s American League Wild Card game between the Twins and Yankees. Luis Severino got one out and made just 29 pitches after getting behind 3-0. Joe Girardi had the quick hook, and it may have saved the Yankees’ season. On the other side, Twins’ starter Ervin Santana went just two innings (64! pitches) while giving up four runs.

Now, the circumstances were different because it was a 1-game playoff as opposed to a 5- or 7-game series, but the philosophy is trending more toward this direction.

If Ryu can start a Game 4 — on the road — and get six or more outs while minimizing the damage before turning it over to the bullpen, I’d call that a success. It’s six or more outs the bullpen wouldn’t have to get. With Wood and Kenta Maeda projected to make the roster, they could conceivably pitch 6-7 innings before turning the game over to Kenley Jansen, Brandon Morrow and the Tonys.

An argument could be made for Wood just to start outright and bring Ryu (and others) in from the ‘pen if/when he stops being effective. But with Wood’s experience in the bullpen and Ryu needing more time to get loose than either Wood or Maeda, it makes more sense to start Ryu and hope for the best.

Running Ryu out for Game 4 would, of course, come in a scenario in which the Dodgers are up 2-1 in the series, because we all know Clayton Kershaw — despite the Dodgers’ attempts to prevent it — would take the ball on short rest in a 1-2 deficit in Game 4.

Limiting a pitcher’s exposure over the course of a postseason somewhat applies to Kershaw, Rich Hill and Yu Darvish. Don’t expect them to be a lock for seven or more innings. I wouldn’t expect Hill or Darvish to be locks for more than five innings (though, it’d be nice). This is the way baseball — especially in the postseason — is trending.

When Ryu makes the postseason roster and starts Game 4 over Wood, don’t freak out. It’s not an indictment of Wood’s ability. If he were pitching like he did in the first half, this wouldn’t be a question. But since his velocity has dipped, it makes sense to use him to back up Ryu. It also opens him up to be available in Games 1 or 2 of the series, should he be needed.

Dustin Nosler began writing about the Dodgers in July 2009 at his blog, Feelin' Kinda Blue. He co-hosted a weekly podcast with Jared Massey called Dugout Blues. He was a contributor/editor at The Hardball Times and True Blue LA. He graduated from California State University, Sacramento, with his bachelor’s degree in journalism and a minor in digital media. While at CSUS, he worked for the student-run newspaper The State Hornet for three years, culminating with a 1-year term as editor-in-chief. He resides in Stockton, Calif.
@DustinNosler
Previous Final Dodgers’ 2017 NLDS roster prediction
Next 2017 NLDS Preview: Dodgers vs. Diamondbacks could be an epic series