Dodgers 9, Diamondbacks 5: Game 1 belongs to the Dodgers thanks to JT’s 5 RBI 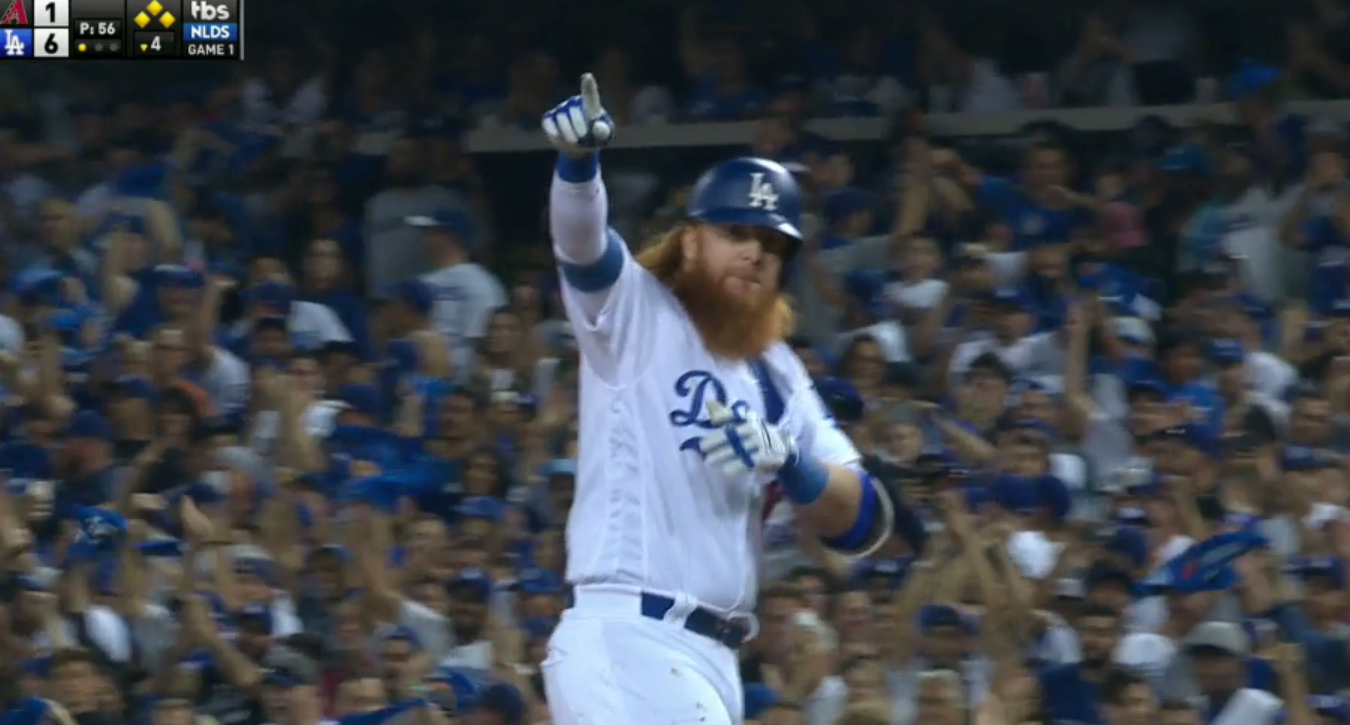 Game 1 of the NLDS didn’t exactly go how the Dodgers would’ve scripted it against the Diamondbacks, but a win is a win. The 9-5 ending score accurately reflects the comfort with which the Dodgers prevailed, as they took an early lead and never relinquished it, constantly adding on when it looked like there was any hint of worry.

Everybody knows the story by now. Clayton Kershaw, the man who will go down as one of the best pitchers in baseball history, came into today’s game with a 4.55 ERA in 89 postseason innings. Regardless of the reason for that, it’s a negative and a significant reason why the Dodgers have failed to achieve what they’ve wanted to for the last four seasons.

For most of the night, he looked like he was on pace to start his postseason extremely well, as he allowed just a run on a solo shot to A.J. Pollock in the third through five innings. However, he gave up another solo shot to J.D. Martinez in the sixth, and it definitely looked like he was laboring. The breaking balls were being left up in the zone more frequently and the velocity went from 92-93 mph to 90-91 mph.

Dave Roberts decided to leave him in, however, and that proved to be a mistake. After getting one out on a line to center, Kershaw allowed back-to-back homers to Ketel Marte and Jeff Mathis, which is not what you want. That ended his night, going 6.1 innings on 100 pitches, allowing four runs on the four solo dongs and giving up five hits and three walks total. Kershaw did look dominant early, though, striking out seven total on the night.

While the defense didn’t help out any of the pitchers most of the night, Cody Bellinger did on this gem of a defensive play.

Fortunately, the bats did come to back Kershaw.

Taijuan Walker made his postseason debut tonight, and I don’t think it could’ve started any worse for him. The good news is that he struck out the side in the first, the bad news is that he gave up four runs and was lucky it was only that bad.

Chris Taylor started the game off by battling back from an 0-2 hole to 3-2 and then singling to center on the seventh pitch of the at-bat. Corey Seager followed by also working things to a 3-2 count, but he walked instead to truly get a rally started. All of that paid off after Justin Turner battled back from 0-2 to 2-2 and then crushed a ball deep into the left-center field bleachers for three.

Thankfully the bats didn’t stop there with Bellinger also working a 3-2 count before singling up the middle. Next came Yasiel Puig, and he really showed the difference between him in years past and this year. In the third pitch of the at-bat, Walker came up and in on Puig with a fastball, and in past playoff years Puig has flipped out in identical situations. This year’s Puig kept his head and battled to a 3-2 count, at which point he fouled off three pitches before getting what he wanted on the ninth offering and drilling it to right-center field for a double and a run.

Was Puig excited? I think a triple chop of the crotch qualifies.

Unfortunately, the Dodgers failed to capitalize in getting even more with Curtis Granderson and Yasmani Grandal both striking out, then Logan Forsythe getting intentionally walked, and Kershaw also striking out. Still, they got four and made Walker throw 48 pitches in the inning, knocking him out of the game.

Zack Godley relieved him in the second and got two scoreless frames, baffling the Dodgers with his curve. However, the offense made the necessary adjustments in the fourth, starting the inning with a Forsythe single, a Kershaw sac bunt, and a CT3 walk. That set the table for Seager and JT, both of whom came through with run-scoring singles to put two on the board.

After Belly reached on an error by Godley, the bases were loaded and Puig drove in another run with a ground out to short.

They almost got two more after Granderson scalded a ball with runners on second and third, but unfortunately it was hit right to the second baseman and the rally was over at three. Godley then got two more scoreless innings before exiting the game, though he did throw exactly 100 pitches, likely meaning that Patrick Corbin will start in a hypothetical Game 4.

Going back to the other end of things, Tony Watson was brought in to pick Kershaw up in the seventh, and while he give up a single to start, he got a weak grounder for an out before exiting for Brandon Morrow. Making his postseason debut, Morrow took all of one pitch to get out of the inning with a fly out.

In their half of the seventh, the Dodgers riled up the crowd again behind a triple from Puig, which included a wild tongue celebration.

Unfortunately, Granderson and Grandal both hit fly balls that were not deep enough to score him, and Forsythe grounded out to end the threat. At some point in that sequence, probably with Grandal or Forsythe, Roberts likely should’ve gone with Austin Barnes or Chase Utley in order to get that insurance run home.

Fortunately, Barnes got a chance in the next inning, and started the eighth with a single. After CT3 grounded out to first, advancing Barnes to second, Seager scored him on a triple down the line and JT got another home on a single for two insurance runs.

Not that it was all that necessary, as Morrow was tasked with the eighth as well and faced the minimum in a scoreless inning, only giving up an infield “single” that Forsythe misplayed more than anything. Then Kenley Jansen entered with a five-run lead and actually didn’t look sharp, giving up a walk, a hit, and an unearned run thanks to a ball Seager threw away. However, he got the three outs he needed, including a hell of a play to end it.

This was great from Dennis Eckersley…

We are told Dennis Eckersley identified himself at security entering Dodger Stadium as “the guy who gave up the home run.”

…which is more than I can say for his analysis, which was fucking horrible.

Puig does weird things with his bat.

It makes his teammates afraid.

“I’m going to sit over here. You might lick me.” pic.twitter.com/zzJyqyUwtq

With the Dodgers ace squaring off against the third starter for the Diamondbacks, the Blue needed this win to start the NLDS and they thankfully got it to go up 1-0 in the series.

The same two teams will do Game 2 of the NLDS tomorrow at 3:08 HST/6:08 PST/9:08 EST, and it’ll be broadcast on TBS. Rich Hill (3.32 ERA/3.73 FIP/4.16 DRA) will take the mound for the Dodgers, and he’ll look to continue his second half run of form, which sees him have a 2.64 ERA with 116 strikeouts and 21 walks since July. Nemesis Robbie Ray (2.89 ERA/3.73 FIP/3.61 DRA) will be the opposition, and he’s basically been good all year, especially against the Dodgers. Of course, it’s worth noting that he’s essentially going on short rest, having just pitched on Wednesday. That creates a bit of a question mark since we don’t know how he’ll react.