Dodgers 3, Diamondbacks 1: A Game 3 win and a sweep for those underdog Dodgers 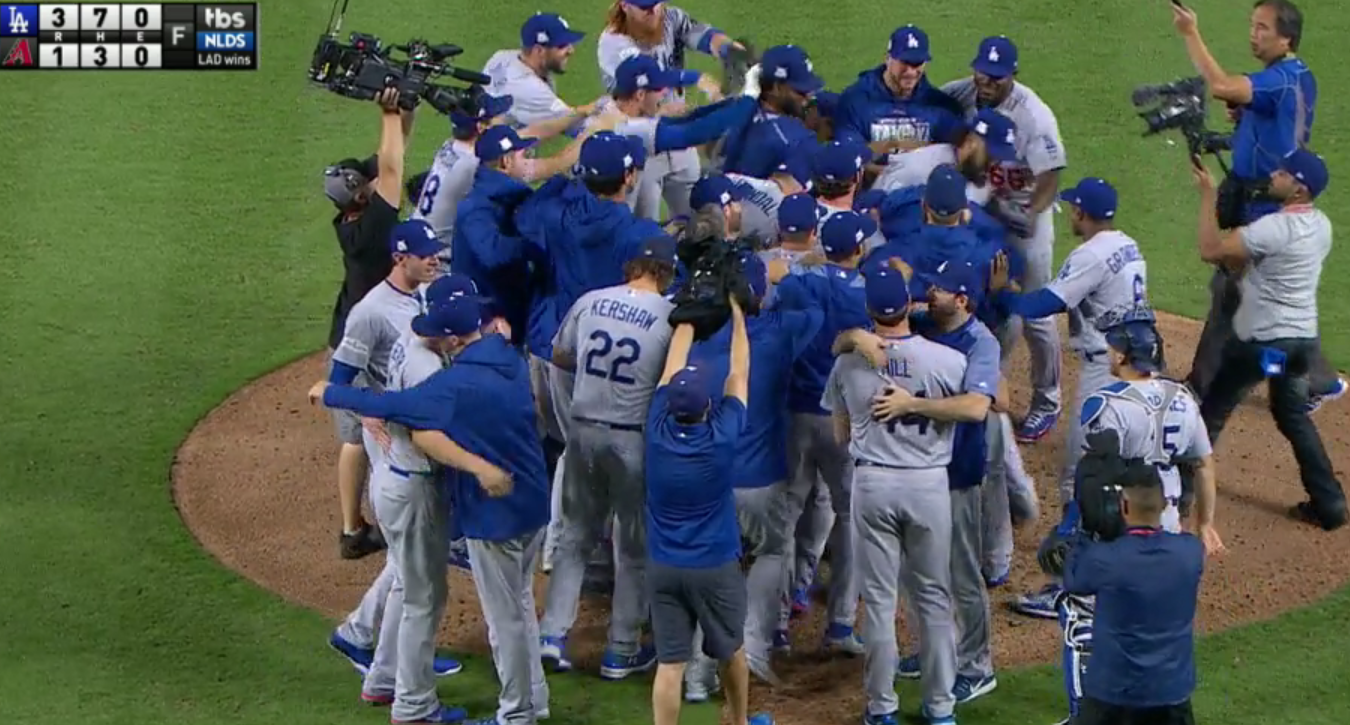 After all that worrying about the Dodgers getting dominated by their NL West divisional rivals, all that crap about the September struggles, and all the hand-wringing about momentum, all this team did was sweep the Diamondbacks for an NLDS win.

It was an impressive team effort from top to bottom, especially after so many pundits picked the Diamondbacks to win, and I’m guessing the Dodgers won’t be so disrespected going into the NLCS.

Yu Darvish entered his postseason debut as a Dodger looking emulate his final three starts of the season, in which he threw 19.1 innings and allowed just two runs (one earned), while striking out 21 and walking just one. Or at least that would’ve been a favorable outcome to his previous two playoff starts, in which he’s surrendered eight runs (seven earned) in 11.1 innings.

Well if there were any demons, Darvish exorcised them today with authority, walking none and allowing just two hits in five innings on 74 pitches. Of course, one of those hits was a solo homer from Daniel Descalso (of course) in the fifth, but he struck out seven and generally looked dominant.

It definitely helped that Cody Bellinger was on defense making plays.

The reason he was taken out despite his line was because to start the sixth Darvish almost hit pinch-hitter Christian Walker with a fastball and then did he him in the helmet with another fastball. That was fine, but it was only controversial because Darvish was allowed to hit with a runner on third and one out in the previous inning, so if Dave Roberts knew he was gonna have a quick hook on him it would’ve made since just to get that insurance run. Regardless, Darvish definitely gave the Dodgers exactly what they needed tonight. 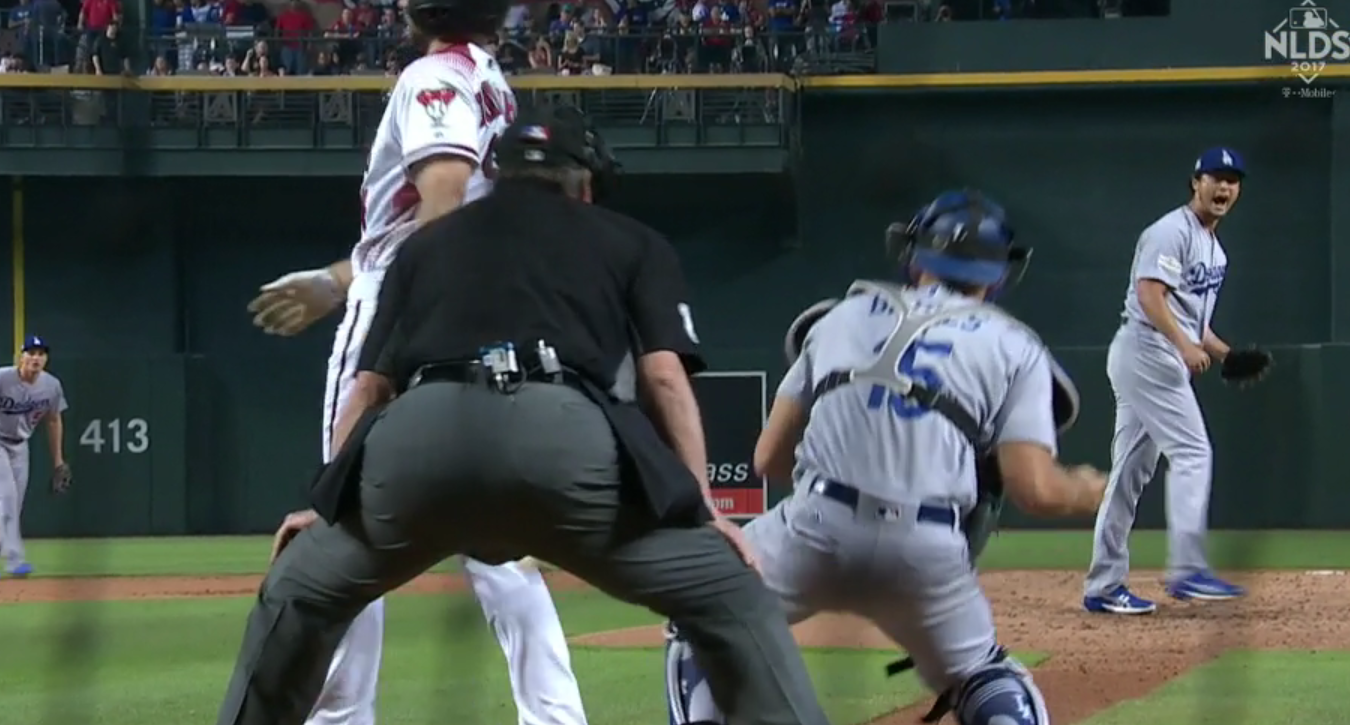 On the other end, Zack Greinke has had a wonderful 2017 season to bounce back from a worrying 2016 campaign, but in his final two starts of the season he gave up 10 runs in just eight innings. Greinke then gave up four runs in just 3.2 innings in the NL Wild Card Game in his playoff debut for the Diamondbacks, running his ERA up to 3.92 over 62 innings in his 10 career postseason starts.

Things got off to a quick start for the bats in the first, with Chris Taylor roping a double to left to start. Corey Seager followed with a walk, and CT3 advanced to third on a Justin Turner fly out to center. That allowed Bellinger to drive in a run despite weakly grounding out to first, giving the Dodgers the one-run advantage.

Greinke seemed to be settling in, however, not allowing much in the fourth and getting two quick outs in the fifth. Thankfully, Bellinger remembered how to hit again at the right time and bombed an oppo shot to double the lead.

Despite getting the lead cut to one, the Dodgers bounced back immediately in the sixth behind a Barnes frozen rope homer to left to make it a two-run game again. 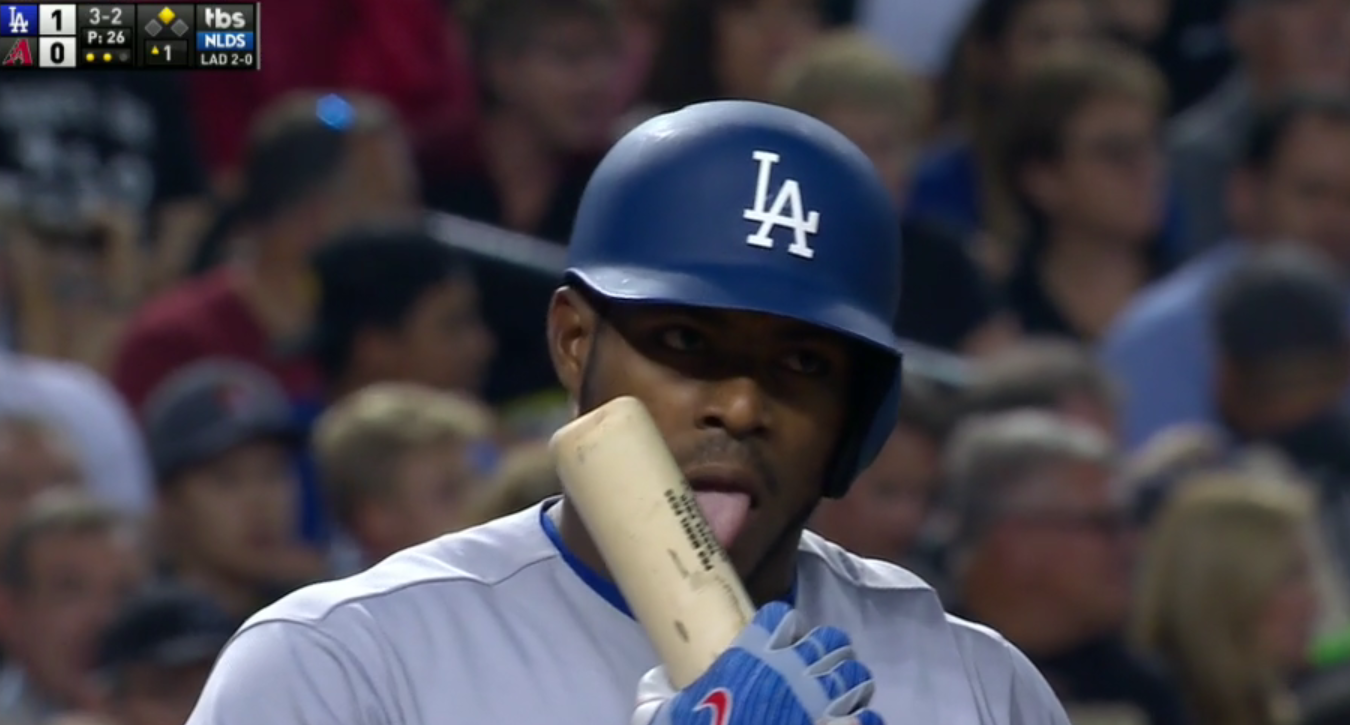 Tony Cingrani was first out of the pen, and he immediately had an impact, inducing a double play to escape danger. Brandon Morrow was then summoned, and he got out of the sixth thanks to another defensive gem from Bellinger.

Morrow was then extended, tasked with getting the heart of the Diamondbacks order in the seventh, and he did exactly that in 1-2-3 fashion.

Despite claims that Kenta Maeda would only be a righty killer, he was allowed to be the setup man in the eighth, and he looked outstanding. Maeda got a 1-2-3 frame, including two emphatic punchouts.

That meant Kenley Jansen just had to get a conventional one-inning save in the ninth. After a strikeout to start, Jansen gave up a seeing-eyed single, but quickly got a comebacker for the second out.

That setup an epic duel with Paul Goldschmidt that got to a 3-2 count, and resulted in a strikeout to win.

Seems like a weird time for this, but sometimes you're just feeling some Tevye in the dugout pic.twitter.com/XpqP3vgqpo

How sweep it is, amirite?

3-0 in the NLDS is a lot better than a five-game nail-biter like last year, right?

It also bodes well for the NLCS, which starts on Saturday on TBS, with Clayton Kershaw going in Game 1 all rested up.