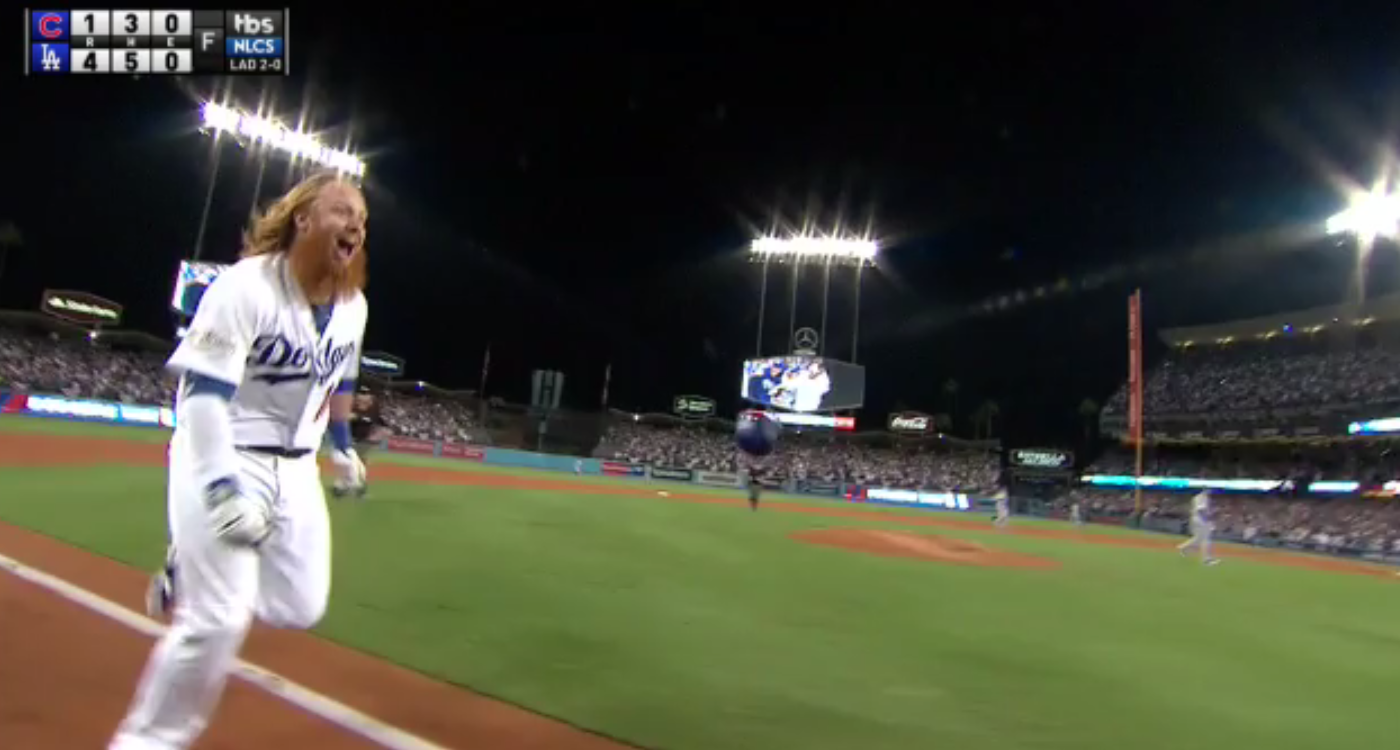 Game 2 of the NLCS was a tight affair throughout, and it was an important game for both teams to get, basically the type of affair that was good for giving everybody a heart attack. Luckily, the Dodgers bullpen showed up in force again, this time backing a quality start from Rich Hill, enough for the Justin Turner to walk it off with a 3-run shot to win it, 4-1.

Hill started the year as a two-pitch pitcher that could throw neither of those two pitches for strikes. That went about as poorly as you could imagine, but Hill found his form down the stretch to the point where he was entrusted with a Game 2 start in the NLDS. Well he showed why this afternoon, pitching five innings on 79 pitches, surrendering just one run on three hits and a walk.

Rich Hill is feelin' it. pic.twitter.com/pyFO4cqner

Hill got into trouble in the third, walking Javier Baez to start the inning even though it should’ve been a strikeout if the umpire called the zone correctly. Nevertheless, he rebounded to get Jon Lester striking out trying to bunt. Hill got right back into trouble after Baez stole second easily and then advanced to third on a wild pitch, still with just one down. Thankfully, he wiggled out of it after Jon Jay hit into a drawn-in infield and Cody Bellinger made the play, and then Hill struck out Kris Bryant to end the threat.

Unfortunately, what he couldn’t get out of is an Addison Russell solo homer in the fifth, which gave the Cubs another lead in the NLCS. Thankfully though, that was the only damage he gave up on the day, and was otherwise dominant with his eight strikeouts.

On the other side, Lester had an off year in 2017, and he game into today’s Game 2 start on three days of rest after throwing 55 pitches in a Game 4 relief appearance in the NLDS. He wasn’t sharp tonight, but the Dodgers didn’t make him pay much for one reason or another. Despite hitting the ball hard early, the offense wasn’t able to get any results, and they wasted scoring chances in the second (1st/2nd, 2 Outs), third (2nd/3rd, 2 Outs), and fifth (2nd, 0 Outs & 2nd, 1 Out) against Lester.

That said, they did manage to scratch a run across the plate in the fifth, in large part thanks to … Charlie Culberson? Yes, Culberson started the inning with a double, later advanced to third on the grounder, and scored on a two-out single from JT to tie the game.

After a walk to Bellinger followed and knocked Lester out of the game, Carl Edwards was summoned from the pen, matching up against pinch-hitter Chase Utley. Edwards struck Utley out with ease to end the threat and strand runners at first and second.

Brandon Morrow was then tasked with getting the heart of the Cubs order in the sixth, and he did exactly that on eight pitches, punctuating the outing with a strikeout. That was easy enough, so he was also given the seventh and got a 1-2-3 inning on 10 more pitches, including another strikeout.

Josh Fields started the eighth for one batter and he got his man to fly out to center. Tony Watson was next up, and he induced a fly out to start his work, before getting a ground out to end the inning.

The struggling Cubs bullpen also continued to shut the bats of the Dodgers down, however, including a key situation in the eighth. After Bellinger reached on an infield single, he advanced to second after a picture perfect bunt from Joc Pederson. Logan Forsythe was then walked intentionally to put runners on first and second with one out, but the Dodgers were unable to take advantage after Austin Barnes hit a grounder for a perfect 6-4-3 double play to end the threat.

Kenley Jansen was then in for the ninth against the heart of the order, notching a strikeout to start but then putting a runner on with a hit by pitch. No matter, as Jansen rebounded with another strikeout before inducing a routine ground out to get the Dodgers to the ninth, capping another amazing game for the pen.

That proved key as Yasiel Puig started the bottom of the ninth with a walk and was then bunted over to second by Culberson to get a runner into scoring position with the chance to end the game. Context-neutral that decision was pretty inconsequential on the chances of winning, and considering it was Culberson batting, it made a lot of sense. However, Kyle Farmer then struck out while pinch hitting for Kenley, which really put the pressure on the Dodgers to end the game. Chris Taylor followed by working an excellent walk. That set the stage for JT, postseason monster, and he indeed ended up doing what he does in the postseason and bombed a three-run homer to dead center on a 1-0 fastball from John Lackey (which made it all the better).

So did the Dodgers bench.

When you realize the save chance isn't coming. pic.twitter.com/YvhBdnTsQM

The Dodgers are obviously now up 2-0 in the NLCS and are 5-0 in the playoffs and I have no idea how to feel at this point cause I’ve never been here.

After a day off tomorrow to travel to Chicago, the Dodgers will play the Cubs with Yu Darvish on the mound for the Blue against Kyle Hendricks.