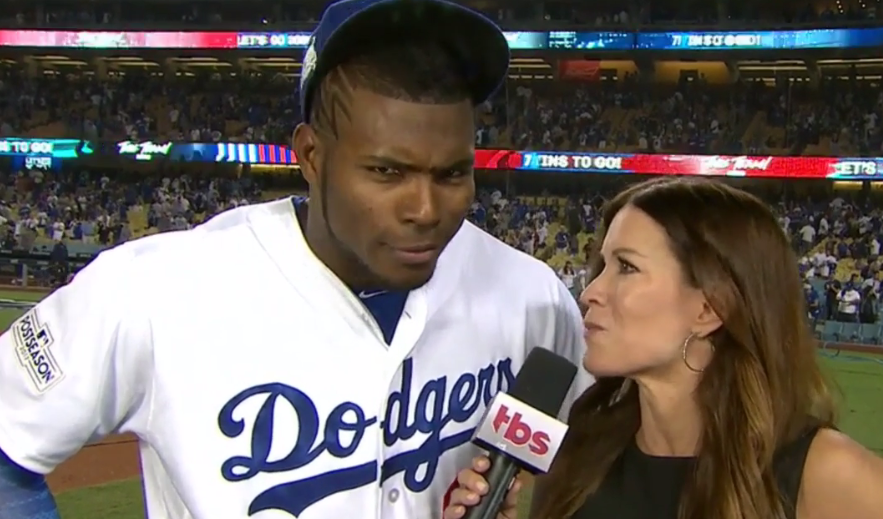 A lot of the Dodger-related attention recently has been focused on Justin Turner, and rightly so after his walk-off homer in Game 2 of the NLCS provided Los Angeles with its most meaningful baseball moment since Kirk Gibson‘s famous homer in Game 1 of the 1988 World Series. Plus, in 92 postseason plate appearances, JT now has a slash of .377/.478/.636/1.115, which is good for the third-best postseason OPS ever for a player with 90+ plate appearances.

It’s been impressive to watch and he deserves every bit of the credit he’s getting now, but Turner’s performance isn’t all that surprising to me, honestly. JT has done it in previous postseasons, and has consistently been the Dodgers biggest threat in meaningful situations over the past three years. I don’t want to say I expected this type of ridiculousness to continue, but everybody sorta figured if the Dodgers were going to get far then JT was going to play a major role. However, the other player that has been the key to this run has definitely been a pleasant surprise: Yasiel Puig. Not to say Puig hasn’t gotten his share of plaudits as well, but unlike Turner’s performance, Puig’s star turn was very much a surprise.

After struggling with injuries and general averageness for the past two seasons, Yasiel showed signs breaking out during the regular season by setting a career high in walk rate (11.2%) and a career low in strikeout rate (17.5%) with Gold Glove defense in right, but as a hitter his slash was still just an above average .263/.346/.487/.833 with a 117 wRC+. Furthermore, it was hard to know how he’d react in the postseason. After the 2013 NLDS against the Braves in which he posted a .471/.500/.529/1.029 line in 18 plate appearances, Puig put up a godawful .203/.277/.271/.548 line from the 2013 NLCS to the 2016 NLCS over 65 plate appearances. Part of the reason for that is Puig was prone to emotional outbursts that weren’t productive, like being easily put off his game by a single pitch remotely up-and-in, for example. That made him almost impressively easy to pitch to, transforming him into an easy out as long as the pitcher could execute.

For what was understandably a bit of a question mark entering the postseason, suffice to say nobody could’ve predicted what has transpired to this point.

Puig is slashing .438/.571/.875/1.446 this postseason with a 23.8% walk rate an a 9.5% strikeout rate, which gives him a ridiculous 266 wRC+. Perhaps most telling is that he saw 3.72 pitches per plate appearance in 2017 during a year he posted a career high in walk rate, but he’s seeing a ridiculous 5.38 pitches per plate appearance so far in the playoffs, almost working a full count every time he steps up to the plate on average.

Notably, Puig was locked in from his very first plate appearance, a nine-pitch battle with Taijuan Walker that he punctuated by crushing a double to right-center field.

In past years, that up-and-in pitch would’ve set him off and made him lose his cool, causing him to basically go into rage mode for the rest of the game. However, this new version of himself worked a truly great plate appearance with a quality finish to boot.

It’s like Puig has flipped a switch or something as soon as the playoffs rolled around. Except this time instead of unbridled energy going everywhere with explosive but also reckless and destructive effects, he’s seemingly channeled all of that into focus, still having the most fun out of anybody out on the field but also basically becoming one of the best hitters in baseball.

As a result, he’s carried the team so far in October, not only posting the best OPS on the Dodgers (JT is second) but also having the best OPS out of all players with at least 10 at-bats this postseason (Jose Altuve is second). So while this pace would be a hard ask for him to keep up going forward, with Corey Seager out indefinitely, Puig will be counted on to pick up the slack. And fairly or unfairly, how far the Dodgers go this year will likely come down to how far Yasiel’s bat can take them.