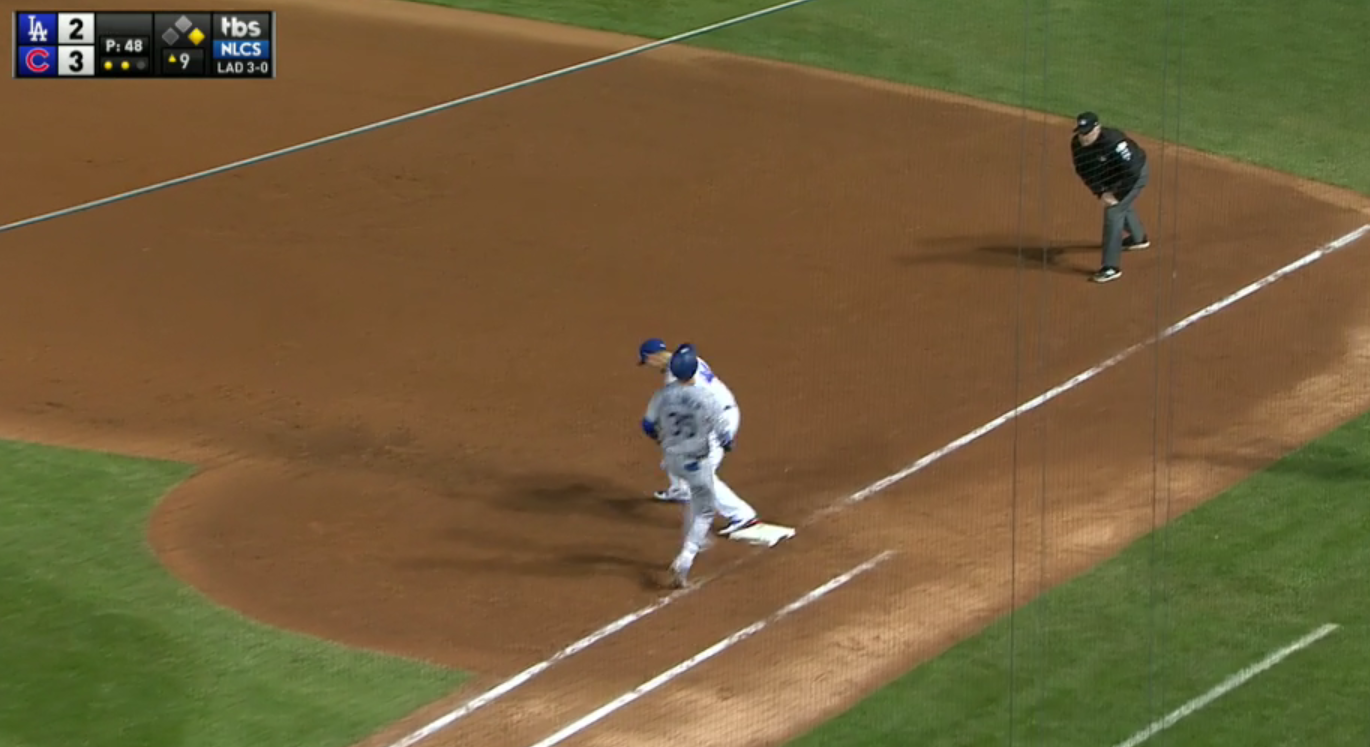 The apparent invincibility of the Dodgers came to an end in a 3-2 loss to the Cubs in Game 4 of NLCS. With their backs against the wall, the Cubs simply made more plays than the Dodgers did for the first time this series.

Dave Roberts has been almost free of mistakes so far this postseason, but he ran out a 5-6-7-8 bottom half of the lineup that went Andre Ethier, Curtis Granderson, Yasmani Grandal, and Chase Utley, and three of them rewarded him with an 0-for-11 showing with eight strikeouts and a hit by pitch (Grandal went 0-for-1 with three walks). It was less than ideal and that wasn’t the only curious decision he made tonight.

Alex Wood made his first playoff start ever and his first start of any kind since September 26 tonight. Personally, my hope was that the layoff of 22 days would help bring back his velocity, but that was definitely not the case as he was 89-91 mph throughout the night. Wood continued to be more hittable as a result, and though he surrendered just four hits on the night, three of those were homers to do all the damage. Willson Contreras went yard in the second with an absolute bomb, and Javier Baez took him deep once in the second and once in the fifth.

While Wood lasted just 4.2 innings, removed after allowing a single to the Jake Arrieta, I suppose he didn’t walk anybody and struck out seven at least.

Speaking of Arrieta, he turned in a hell of an outing with the Cubs facing elimination, grinding through 111 pitches before finally being removed with two down in the seventh inning. Arrieta limited the Dodgers to three hits, and despite the five walks, he had the usually disciplined bats chasing out of the zone for most of the night. That helped him limit damage, as it resulted in nine strikeouts on the night.

Thankfully the Dodgers did get on the board against him in the third behind a Cody Bellinger homer lined over the basket in right.

However, that was all they got against him, as Arrieta effectively emptied the tank to keep the Cubs in the playoffs.

The Dodgers bullpen continued to excel in the postseason. After yesterday’s disaster, Ross Stripling came in when the Cubs lineup came around for the third time and promptly got out of the fifth by inducing a grounder right back to him on the first pitch he threw. Stripling proceeded to start the sixth as well, inducing a routine ground out and then a strikeout before handing things over to Tony Watson. All Watson proceeded to do was strikeout Anthony Rizzo to end the sixth … on a pitch that actually hit him.

Kenta Maeda was summoned next for the seventh and he continued his renaissance in relief, getting a 1-2-3 inning with a strikeout. The eighth was a bit of an adventure for once, as Tony Cingrani entered and hit the first batter he faced. He rebounded with a strikeout, but then allowed a single before getting a jam-shot ground out, which ended his time. Josh Fields was then summoned to get one out with runners at the corners, and he did just that by inducing a harmless grounder.

The bullpen of the Cubs has been shaky this series, but they did their job today. Brian Duensing relieved Arrieta in the seventh to get one out, and got Bellinger to fly out to left with runners on first and second. Closer Wade Davis was then tasked with two innings, and he was promptly greeted by Justin Turner going big fly to left-center field to cut the lead to one.

Yasiel Puig then followed with a walk, but Ethier popped out foul and Granderson struck out. After Grandal worked another walk, Utley stepped up despite the fact that they removed Grandal for pinch runner Charlie Culberson anyway, and Austin Barnes was ready to hit. Instead of going with one of the best hitters on the team, Dave let Utley have a shot, and he struck out meekly to end the threat. I have no idea what the hell he was thinking there.

Davis then came back out for the ninth, striking out Barnes, but issuing a walk to CT3. That seemed to set things up well with Bellinger and JT coming up next, but after getting into a 2-0 count against Cody, Davis worked a curve for a strike and then got him to pound a fastball in the middle of the zone into the ground for a game-ending double play.

Following a truly bizarre sequence in the eighth during which the umpires erroneously overturned a Granderson strikeout into a Granderson foul ball, Joe Maddon was understandably livid and got ejected.

That led to Cubs fans … well, they were less than pleased.

After the Game 4 loss, the Dodgers are still up on the Cubs in the NLCS by three games to one, but this was their first loss of the postseason and they’re now 6-1.

Game 5 of the NLCS will be tomorrow, with Clayton Kershaw squaring off against Jose Quintana. Hopefully Kershaw doesn’t shit the bed again and the batters don’t continue to miss cookie after cookie against Quintana.