Clayton Kershaw’s flat slider is back, but there’s hope

At the beginning of this season, Clayton Kershaw didn’t look quite right. This was before his homer problem took hold, and his ERA still looked basically Clayton Kershaw-ish, but he was missing much fewer bats than usual and it caused people to wonder why. Chad looked at it here, and Ben Lindbergh looked at it at The Ringer. The conclusion was the same: something was wrong with Kershaw’s slider. More specifically, Kershaw was throwing his slider harder than ever, which resulted in it coming into the zone flat and in a similar plane as his fastball. He was getting fewer swings and misses on the pitch than he ever had, and batters were hitting the pitch harder when they swung at it.

As the season wore on, Kershaw began to fix the problems with his slider. His average slider velocity was near 90 in April, but fell to around 88.5 in June and July. The vertical movement on the pitch fell each month between April and July (in this case, less vertical movement is better because it creates the perception of moving down with respect to the fastball). Kershaw’s slider whiffs-per-pitch and whiffs-per-swing rate climbed each month between April and July, corresponding with the dropped velocity and better movement. The peripherals on the pitch were matching or were even better than Kershaw’s recent peak levels. The pitch was fixed.

However, Kershaw’s return from the back injury has resulted in some familiar problems popping up. His slider has returned to its flatter April form. The slider was flat right away — this isn’t necessarily intended to be an “October Kershaw” thing — but the issues have spilled over into Kershaw’s three postseason starts. This starts with the velocity, which is trending in the wrong direction: 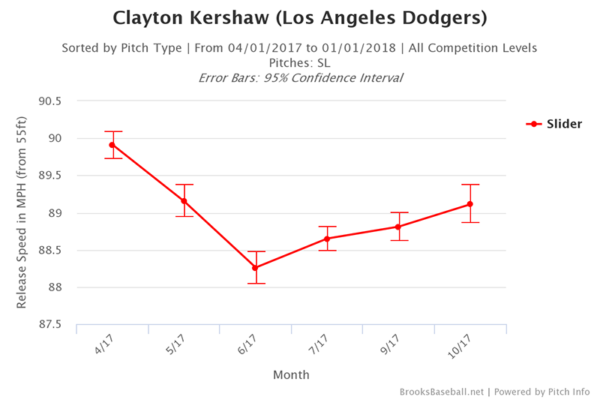 It extends to the vertical movement, which has flattened out: 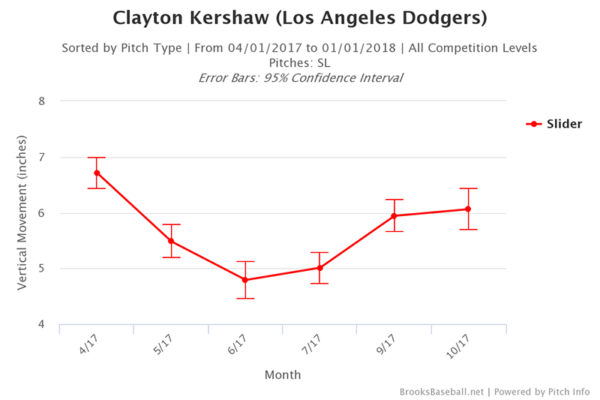 And where things have really gotten ugly are the missed bats, which have basically stopped in October: 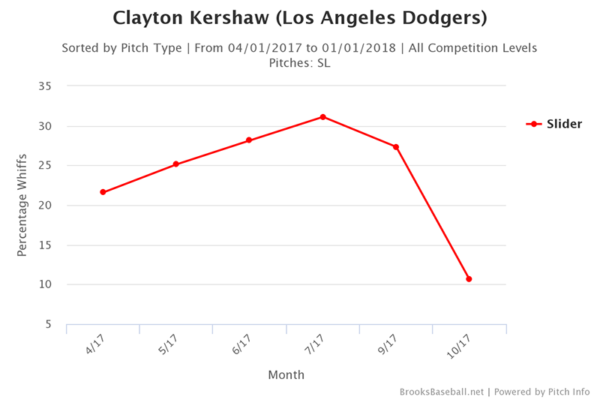 All of this combined is bad news and means that there are some pretty significant fundamental issues with how Kershaw is pitching right now. This isn’t to say that he cannot be successful, and his Thursday start proved it. However, he needs his other pitches to be extremely sharp to make it work. Kershaw’s fastball command was poor in his start against the Diamondbacks and the first start against the Cubs, and when that started to go he was unable to lean on his slider for backup. Those command problems may be tied with the cause of the slider problems, which could be the back injury or something completely unrelated.

However, if we’re looking for good news, the last few innings of Kershaw’s pennant-clinching start may contain it. Below is a chart of every pitch Kershaw threw in that outing. Each horizontal “clump” of pitches is an inning. Each vertical clump is basically a pitch type (Kershaw threw one change which is mixed in with the sliders, but it doesn’t change the chart very much). We’re looking for box colors which represent positive results, such as yellow for whiffs and blue for called strikes.

However, you can see that things began to change as the start progressed. Kershaw’s average slider velocity dropped to between 88 and 89 and the results started to follow. From the fourth through the sixth, Kershaw induced three whiffs on 17 sliders. That rate is still below where he’d want it, but perhaps more important in such a small number of pitches is that the fundamental things which made Kershaw’s slider an excellent pitch began to show up once again.

Here’s Kershaw’s slider velocity by inning in his Thursday start: 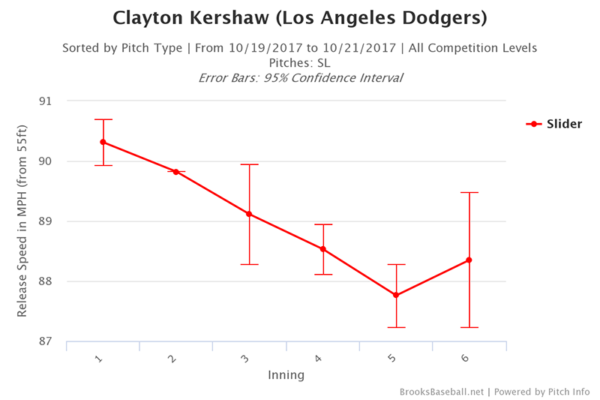 And here’s how the vertical movement responded: 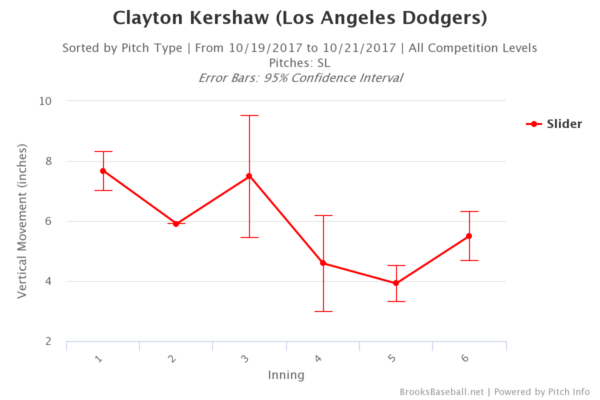 A good Kershaw slider is somewhere between 4- and 5.5 inches of vertical movement. He wasn’t there in the first three innings, but found it as the velocity started to drop towards a better number at the end of the start.

If you prefer your pitching analysis in GIF form, here are two from the game. This is from the first inning, a slider clocked at 91:

And the fourth, a slider clocked at 88:

The pitches end up in basically the same spot, but you can see the 88 sinking a bit more and drawing the swing. Most of Kershaw’s other sliders in that fourth inning came in higher than the target, which means he still has work to do, but it’s still a promising start.

The fact that Kershaw appeared to find his best slider at the end of Thursday’s start is good news, as is the fact that he’s fixed the slider once before this year. Perhaps fixing it once makes it more likely to fix the same problem again later. Unfortunately it’s hard to know why he’s throwing the pitch so hard. It could be the back, it could be something mechanical, or it could be a combination of both. This research didn’t reveal the answer. Still, the end of Thursday’s start was encouraging.

What does Kershaw think of all of this?

Me, silly: Clayton the depth on your slider has varied, is that a back thing?

You, Clayton: no, I dunno what analytics group you work for

I think it’s pretty clear that Kershaw’s slider has changed, and you can see it visually that it changed even within last Thursday’s game, not to mention the wider season trends. Whether Kershaw knows or cares is a separate question. He could also be saying that it has the same drop at the same velocity, which would still mean he needs to throw it less hard. Either way, he didn’t really want to talk about it.

Kershaw will get at least one start in the World Series, and it’s pretty likely that he will get two. As the front of the pitching staff, how he pitches will be critically important, especially in Tuesday’s heat. A ball that misses the bat can’t go out of the park, and the ball will be carrying extremely well in the expected record temperatures. Finding an encouraging sign in three innings is always going to be a little tenuous, but the ingredients for an improved Kershaw may be falling into place.