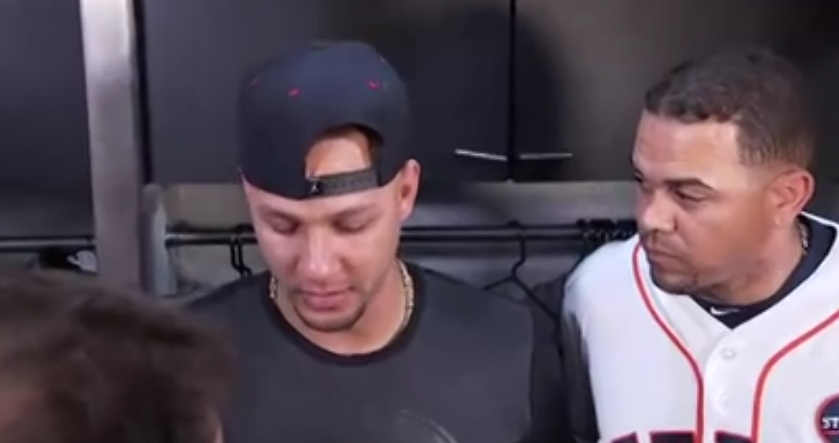 Following a second-inning homer off Yu Darvish in Game 3 of the World Series, Yuli Gurriel made a slant-eye gesture referencing the half-Japanese, half-Iranian pitcher and proceeded to use a slur against him as well.

After the game, Gurriel was asked about it by the media, and he offered an “apology”. In reality, though, it was primarily a bunch of excuses.

“I didn’t try to offend anybody,” the native of Cuba said through an interpreter. “I was commenting to my family that I hadn’t had any good luck against Japanese pitchers here in the United States.” “I didn’t think anybody would think about what I meant with all those kinds of things like that. I offer my apologies to baseball and anyone offended.”

So basically, “I’m sorry that I got caught and that you were mad.” Basically he’s claiming he didn’t mean to be racist while making slanty eyes and using a slur. K.

In Dylan Hernandez‘s screed against labeling any of this racist — Hernandez talks about the context of “chinito” while hilariously not even addressing that the context of the use was during the gesture itself — Gurriel even admitted that he knew Japanese were offended by the word.

As for his use of the word “chinito,” Gurriel explained, “It’s because in Cuba and in various places, you don’t say Japanese, you call all Asians ‘chinitos.’” He apologized for that too. “I was in Japan and I know they are offended by that,” he said.

Speaking of, Gurriel played in Japan, so miss me with the ‘he didn’t know any better’ stuff.

“I didn’t want to offend anybody in Japan,” Gurriel offered. “I have a lot of respect for Japan. I played in Japan.”

Anyway, Gurriel also explained that he didn’t know he did it, which somehow makes it worse to me.

Through an interpreter, Yuli Gurriel apologized for the gesture and said he "meant no disrespect." Added he didn't even know he did it.

Like … so this is just the stuff you do naturally, then? Swell.

Manager A.J. Hinch said that Gurriel was “remorseful” about what he did.

People are also reporting that the commissioner will look into the situation.

I've been told MLB will interview Gurriel about the dugout gesture toward Darvish and consider discipline.

Realistically, however, I will be shocked if anything significant happens.

On the other side of things, Darvish handled it about as well as could be expected.

Darvish apparently had plenty of time to digest things before making the statement, because he was aware of what happened mid-game.

Apparently Darvish is aware of Gurriel`s actions, he had a chat about it with his interpreter in the dugout.#WorldSeries #Dodgers #Astros pic.twitter.com/qPbbUvj8hA

As Bill Baer pointed out, however, Darvish’s response shouldn’t be what’s expected as a reaction to racism.

After Darvish’s message circulated around Twitter, many in the media rushed to laud Darvish for being so gracious towards Gurriel. Darvish, of course, can react as a victim of racism any way he pleases. There’s an issue, though, when society rewards victims of racism for reacting in a way that takes the heat off of the offender. To say that Darvish’s reaction was “gracious” and “classy” is also to imply that reacting differently would not be “gracious” and “classy.” Praising Darvish also puts societal pressure on other victims of racism, sexism, homophobia, transphobia, etc. to react in the same way. It invalidates their anger and hurt. And most victims of such bigotry don’t have the same support of a strong union, their co-workers, family, and friends, among other things. They may not be able to afford to tolerate it in the same way.

That’s especially true because taking the high road can be used by others to brush off what transpired as meaningless, which unfortunately is already happening.

Regardless, that’s not to say Darvish was fine with what happened, as he did seem bothered by it on some level.

“Houston has Asian fans and Japanese fans, and there are Asians all over the place,” Darvish said. “Acting like that is disrespectful to people all over the world. To the Houston organization, it’s just not a nice thing.”

“Nobody’s perfect, and everybody’s different,” Darvish said. “We all make mistakes. We’re all human beings. That’s what I’m saying. We’ve just got to learn form it and we’ve got to go forward.”

And here’s video from the post-game interview:

Gurriel’s racist actions towards Darvish and the weak apology that followed were quite shitty overall, but the reactions from others on the Internet to this was … not exactly shocking, but amazing in a way. This was as clear-cut of a case as there is, where a racist action is paired with a racial slur, and many people online are acting like it was definitely somehow not racist or that it was racist but we’re the one with the problem if we didn’t like it. Rather absurd from my point of view. Just own the reality that Gurriel did something terrible and deserves to get shit for it. Not that hard.

My feeling about all this at the moment is just … disappointment more than anything, really.