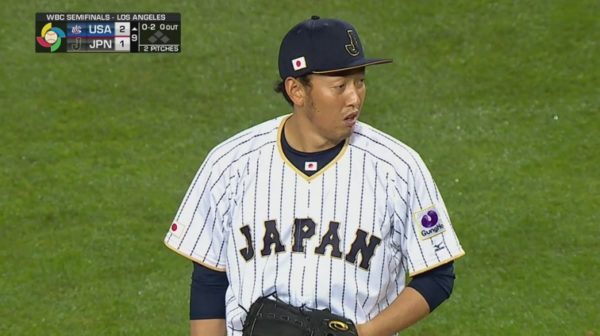 Last night, we finally got a little taste of Dodger news following the completion of incredibly quiet Winter Meetings.

Dodgers appear to be targeting Japanese right-hander Yoshihisa Hirano for bullpen help. 33-yr-old had a 2.67 ERA in 58 games for Orix last season.

This rumor came a few hours after Japanese media reported that Hirano received a multi-year offer and is expected to sign in the next two weeks.

Yoshihisa Hirano has reportedly received a multi-year offer from an MLB club and is expected to sign by Christmas (via @gwynar / Sponichi) https://t.co/xDymQFewjs

Yoshihisa Hirano, a 33-year-old right-handed pitcher, has pitched for the Orix Buffaloes for his entire career. He has been their closer for the last five seasons. He is an international free agent, so no posting fee would be required to sign him. Dustin looked at some cheaper relief options yesterday, and Hirano would likely fit squarely in that tier.

For most of you who have never seen Hirano pitch, here is a video from last year:

Hirano does not follow the stereotype of a funky Japanese reliever with a bunch of pauses in his delivery. He pitches out of the stretch at all times and has a straightforward delivery from a three-quarters arm slot. His fastball can touch 95 but the average velocity has held steady around 91 for the past few years according to DeltaGraphs. His out pitch is a forkball, which he throws over 40 percent of the time. At its best, it has sweeping movement in towards right-handed batters low in the zone, and the break is such that it works as a back-door freeze pitch as well. It still flashes as a plus pitch, which is a good sign. He will also occasionally mix in a slow slider, though it’s at a frequency such that it’s fair to call him a two-pitch pitcher. His forkball also helps him get a decent number of ground balls, which has kept him over the league-average grounder rate in each of the last two seasons.

For most of his career, Hirano has been one of the most reliable and dominant relievers in Japan. He shifted to a relief role in 2010 after a failed stint as a starter and his stuff immediately played up. In his first season as a reliever, Hirano struck out 30 percent of the batters he faced. In the only season between 2010 and 2015 in which he did not induce at least 10 strikeouts per nine, he had a 16:1 strikeout to walk ratio. Hirano’s success was rewarded with a spot on the 2017 WBC roster. He pitched once in the semifinals at Dodger Stadium and struck out the only batter he faced, Nolan Arenado, on three pitches.

All of this sounds good so far, but unfortunately there are some pretty significant issues which need to be addressed. Hirano will turn 34 in March, and his numbers have started to move in the direction you would expect from a 34-year-old pitcher: 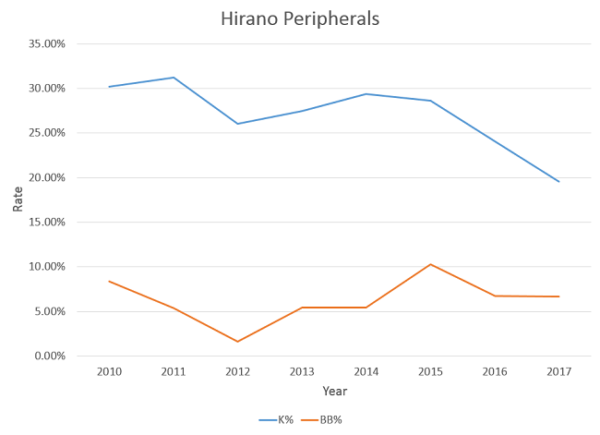 That’s a pretty concerning trend for somebody in that stage of their career, and even in-depth looks at zone and contact rates can’t make it look better. DeltaGraphs has detailed plate discipline stats for the last four seasons, and Hirano’s 12 percent swinging strike rate was the lowest in that time-span. That number still isn’t horrible (Ross Stripling had an 11.9 percent swinging strike rate in relief, by comparison), but the trajectory is the biggest concern at this age.

Oddly, Hirano’s velocity has held steady during this otherwise steep decline, and the primary issue seems to be command-related. This leads me to my most prominent memory of Hirano from this year, Carlos Peguero hitting a terrible splitter into low Earth orbit on opening day weekend:

Incidentally, that’s about the fourth-longest homer that Peguero hit in 2017.

That example isn’t entirely fair to Hirano since he only gave up four more dingers over the course of the season, and he also did a good job limiting them in 2016. Keeping the ground ball rate high will obviously help with that, especially when moving into the confines of juiced-ball MLB.

The other thing in Hirano’s favor is that splitters and forkballs tend to play up when changing leagues. The NPB ball is tackier and has higher seams, so it’s harder to get pitches out of the hand with lower spin. The best forkballs and splitters don’t spin quickly, and thus other pitchers have reported an improvement of movement between leagues. The most famous example is Hiroki Kuroda, but obviously it varies from pitcher to pitcher. Forkballs are pretty rare in MLB right now, so the overall absence of them could play in Hirano’s favor. At the very least, he would be a very different look from the rest of the Dodger bullpen, though one has to wonder if the submarine arm slot of Kazuhisa Makita would be better-served for that purpose.

Overall, without knowing more details, it’s hard to form a strong opinion on this rumor. If Hirano can maintain his current strikeout, walk, and ground ball numbers, he’s probably a good option for 50+ middle relief innings. He could be better if his stuff plays up with the new ball, but the trajectory of his last two years is pretty hard to ignore. He’s not the next Brandon Morrow. If you’re looking for a big, needle-moving signing, this would not be it. However, Hirano can still help the team, and these moves in the margins can make a difference in the long-run.

Daniel Brim grew up in the Los Angeles area but doesn't live there anymore. He still watches the Dodgers and writes about them sometimes.
@danielbrim
Previous 2017 Dodgers In Review: RP Ross Stripling
Next Tom Koehler reportedly signs 1-year deal with Dodgers, provides an intriguing relief option