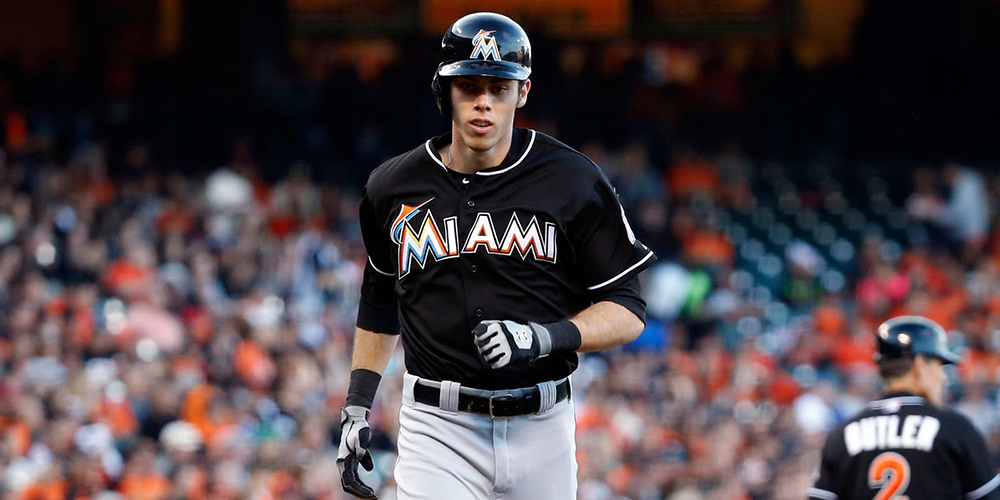 We’ve written a lot about players the Dodgers should be interested in — Chris Archer, Andrew McCutchen, Mike Minor, Marcell Ozuna, Giancarlo Stanton — and while none of them are now Dodgers, any one of them would (would have) look (looked) good in Dodger blue.

But one name who is reportedly available is noticeably absent. Until now. From Ken Rosenthal (The Athletic) and, indirectly, Dave Cameron (FanGraphs):

“Virtually every club is interested in trading for Marlins outfielder Christian Yelich, who not only is entering his prime at 26 but also is under control for five more seasons at a total cost of $58.25 million. One rival executive believes the Marlins would be justified in asking for three or four genuine assets for Yelich, and wonders if any club would meet that price. The Los Angeles Dodgers, deep in prospects, might be uniquely positioned—and motivated—to make such a deal. As Fangraphs’ Dave Cameron said in a chat on Wednesday, ‘(Yelich’s) super-low AAV is even more valuable to them because of their luxury-tax situation, and he’s the kind of high-end player they need to keep upgrading their roster.'”

Yes, Christian Yelich is the man, and these comments by Rosenthal and Cameron have me thinking about him.

In my opinion, the Dodgers are at the front of the line for Yelich. LA was in on Ozuna and made a strong play for him. Like when STL pivoted from Stanton to Ozuna, could play out same way here for LA.

I have heard behind the scenes that the Dodgers do have interest in Yelich, but the price to acquire him would be quite high — much higher than either Stanton or Ozuna, for precisely the reason Rosenthal pointed out above.

Because the luxury tax number is calculated via annual average value, Yelich’s $11.65 million number is incredibly enticing for teams attempting to stay under the $197 million threshold. Since the Yankees have already made their offensive offseason splash with Stanton, the Dodgers are the only team at present who might be looking at Yelich as a premium acquisition, in part because of his salary. But that doesn’t mean there won’t be a ton of teams interested in him — reportedly as many as 12 are, including the Braves, Giants, Nationals, Padres, Phillies, White Sox and others.

Yelich isn’t happy with the direction the Marlins are trending and now might be the time for the Dodgers to strike. The team obviously wants to have high-end talent, and often times high-end talent costs a lot of money (see Bryce Harper next winter), but the fact that the Dodgers want to keep their luxury tax number lower for the next year or two means Yelich makes the most sense of anyone rumored to be available.

The Southern California native is coming off back-to-back 4.5-win seasons. In 643 MLB games, he has amassed 17.2 WAR and a 121 wRC+ over that time. He isn’t a premium power hitter (though, some believe there’s some untapped power in his swing), but he’s a good hitter who is one of the biggest bets to boom over the next few years. He draws walks (10.7 percent), doesn’t strikeout at an alarming rate (20.6 percent) and has some pop (.142 ISO). If you want any negatives, especially in this era of the fly ball revolution, it’s that Yelich lives on the ground. He has a career 59.1 GB% and a .356 BABIP. But even that has a positive spin, because he also had the 10th-highest exit velocity on grounders of any player in baseball (minimum 100 ABs) last season. Also, his ground ball rate has decreased in each of the last two seasons, while his fly ball rate was a career-best 25.2 percent in 2017. Plus, he averaged 93.9 MPH on his 209 non-ground balls, just 0.2 MPH slower than both Cody Bellinger and Corey Seager. The increased fly ball rate had an adverse effect on his line drive rate (career-low 19.4 percent), but he still had an above-average 90.4 MPH exit velo last season and has averaged 91.4 MPH the last three seasons. That’s right up the Dodgers’ alley.

Something that could give the Dodgers and fans pause is the fact Yelich hasn’t been particularly good against left-handed pitching in his career. He owns a 95 wRC+ and a .704 OPS in his career. While he puts the bat on the ball a bit against lefties, his power is sapped when facing southpaws. Of his 13 extra base hits off lefties, he homered off Hyun-Jin Ryu and Cole Hamels and doubled off Madison Bumgarner, if you’re looking for anything positive to take away from this blemish.

On defense, Yelich played center field last season. The Marlins had Ozuna out there in 2016, but his -12 defensive runs saved necessitated a change, so Yelich went to center and Ozuna to left. Ozuna thrived, posting an 11 DRS, while Yelich took a step back to -6 DRS. I say took a step back because he was one of the premiere defensive left fielders through the 2016 season. From 2013 through 2016, he was 4th-best in baseball with 32 DRS. Starling Marte had a whopping 68 in that time, followed by 54 from Alex Gordon, and the next tier was Yoenis Cespedes with 33 DRS and then Yelich. So while some folks think playing Yelich in center field would be the answer, I’d actually rather see the Dodgers play Yelich in left field and let Chris Taylor have a full season of work in center field. That isn’t to say Yelich couldn’t slide over to center field if Taylor needs a day off or fills in for someone on the infield, but having premium corner defenders in Yelich and Yasiel Puig flanking an athletic guy like Taylor could end with the Dodgers having one of the best defensive outfields in baseball.

Now let’s talk about cost. And for that, let’s first go back to Cameron’s chat from Wednesday.

“Andrew Friedman v. the Jeets: Would it take Buehler for the Dodgers to get Yelich? Or does the Miami fire sale mean that the Dodgers could theoretically get him for less?
Dave Cameron: LA has enough talent that he doesn’t have to be in the package. But he shouldn’t be off limits. If you can move Buehler for Yelich, you do it.”

Hm. I think what he’s saying is if you can move Buehler and maybe another piece for Yelich you do the deal. Even then, I’m not sure how much the Dodgers would want to include Buehler to get Yelich, even if it meant keeping most of the other prospects who would be on the table. Maybe a deal could be expanded to be Yelich and Kyle Barraclough for Buehler, Joc Pederson and Jordan Sheffield.

If you want to exclude Buehler — and I don’t blame you — then things get a bit more complicated but is still doable. You’d have to think one of Pederson, Andrew Toles or Alex Verdugo would be involved. Hell, two of them might be involved, because after Yelich, the Marlins outfield depth chart is as follows:

That’s about it. They don’t have anyone else in the upper minors ready to take a spot in the majors, so perhaps two of the three Dodger outfielders could interest Miami. You’d also have to figure Yadier Alvarez would be involved, as he has the high-ceiling, power arm the Marlins are looking for. Remember, they got Sandy Alcantara in the Ozuna deal and Jorge Guzman in the Stanton deal. Like Alvarez, both of them throw in the high-90s and regularly touch 100 MPH, so that profile seems to be what they prefer. Then, they’d probably like a lower-level lottery ticket type to close the deal. Sheffield could be that guy, but there are others who fit the bill: Imani Abdullah, Starling Heredia, Gavin Lux, Melvin Jimenez, James Marinan, Cristian Santana. All those guys are in my upcoming Top 30, and it stands to reason all of them would by pushing the Top 15 in the Marlins’ system — if not higher. Choose any one of those guys to add to the package and I think it’s a pretty competitive deal from the Dodgers’ standpoint.

Last winter, the Nationals sent Lucas Giolito, Reynaldo Lopez and Dane Dunning for outfielder Adam Eaton. He had five years and $38.4 million left on his deal when he was traded, but he also isn’t as good a player as Yelich.

Giolito was ranked No. 10, 12 and 25 by Baseball America, MLB.com and Baseball Prospectus, respectively, prior to the 2017 season. Lopez was ranked No. 31, 45 and 30 using the same order. While the pre-2018 rankings aren’t out yet, it’s safe to assume Alvarez and Verdugo are comparable in terms of overall ranking with Giolito and Lopez. Giolito was ranked higher than Alvarez or Verdugo will be (most likely), but Alvarez is probably right in line with Lopez’s ranking. Throwing in another prospect and a young, cheap veteran like Pederson should more than make up for the prospect ranking — if it actually means anything at all to these teams (it doesn’t).

For Miami to get a return of Alvarez, Pederson, Verdugo and any one of the guys listed above would be quite a deal for both teams involved. Don Mattingly is a noted fan of Pederson, and Verdugo could break Marlins’ camp as one of their starting outfielders. Alvarez needs more time in the minors, as does whichever other player would be involved.

Yelich is just the kind of player the Dodgers should be targeting. His unique blend of being a good-almost-great player on an incredibly team-friendly contract should be attractive for the situation the Dodgers are in. While it’d be nice to build a team completely from within, that’s idealistic. Instead, using prospect capital to acquire players like Yelich is something all teams should strive to do.

The Dodgers are set up to be a championship contender for many years to come. Adding someone like Yelich without sacrificing the future seems like the kind of move this front office would jump at a chance to make. And they’d still be set up perfectly to add a pitcher in-season as they have the last three years.

Yelich almost makes too much sense for #Dodgers.

Dustin Nosler began writing about the Dodgers in July 2009 at his blog, Feelin' Kinda Blue. He co-hosted a weekly podcast with Jared Massey called Dugout Blues. He was a contributor/editor at The Hardball Times and True Blue LA. He graduated from California State University, Sacramento, with his bachelor’s degree in journalism and a minor in digital media. While at CSUS, he worked for the student-run newspaper The State Hornet for three years, culminating with a 1-year term as editor-in-chief. He resides in Stockton, Calif.
@DustinNosler
Previous Dodgers get Scott Alexander, Jake Peter in 3-team deal that costs Avilan, Oaks, Mejia
Next 2017 Dodgers In Review: OF Brett Eibner