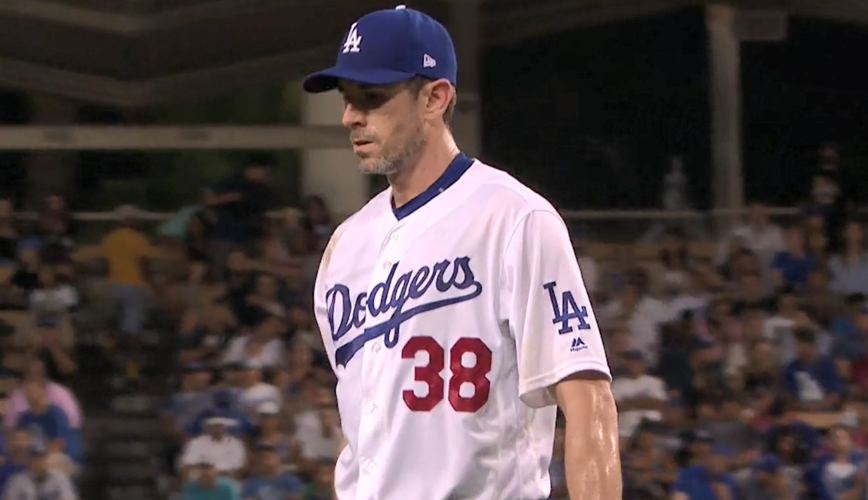 What Happened In 2017: Performed fairly well in limited playing time during yet another season hampered by injuries.

Brandon McCarthy began the 2017 season with a spot in the Dodgers’ starting rotation. He had a decent April, in which he allowed 10 runs on 26 hits in 29 innings pitched, striking out 25 versus nine walks.

McCarthy made the first of his three trips to the disabled list in May, with left shoulder soreness as the culprit. Upon returning later in the month, he put up good numbers, allowing a 3.35 ERA in 43 IP across his next eight starts. His second DL stint came in late June, as he recovered from right knee tendinitis. He’d make just three starts in July, one decent (6 IP, 2 R) and two in which he struggled (combined 10 runs in 8.2 IP). McCarthy hit the DL again in late July, this time dealing with a blister on his right hand. This injury kept him down for nearly two months. He returned in late September, and made three relief appearances during the final week of the regular season.

In July, Dustin looked at McCarthy and determined he was exactly who we all thought he was.

“Brandon McCarthy has never been viewed as a big strikeout guy. Despite having good stuff, he hasn’t really been a guy who’s going to be mistaken for Max Scherzer in terms of strikeouts. But when the Yankees acquired him from the Diamondbacks in 2014, they allowed him to start throwing his cut fastball again, which the D-backs wouldn’t out of fear of injury. His strikeout numbers increased and made himself a more attractive pitcher for his impending free agency. The newly installed Dodger front office pounced on what they thought was a pitcher who had reinvented himself and was, potentially, on the verge of a real breakout. That looked like the case when he made his Dodger debut in 2015. Yes, the ERA was ugly. Yes, the FIP was really bad. But McCarthy had shown the potential the front office saw in him. He struck out 29 hitters in 23 innings and had an elite-level 30.9 K%. This was the guy Andrew Friedman, Farhan Zaidi and Co., were getting when they gave him the 4-year, $48 million deal.”

“But the strikeouts have fallen in the last three seasons. In his first two seasons with the Dodgers — admittedly small sample sizes — McCarthy was much better at getting strikeouts than he has been this season. The front office’s bet on McCarthy looked like it might pay off, but as of yet, it hasn’t.”

It seems like his high strikeout rate from 2015 (in a small sample size) was the outlier, not a glimpse of things to come.

McCarthy was kept off the rosters for the National League Division and Championship Series, but was included on the World Series roster. When he entered to pitch the 11th inning of Game 2, it was his first-ever playoff appearance (despite the fact that he has a ring from the 2005 White Sox). Unfortunately, it did not go well, as he allowed a two-run home run that ultimately won the game for the Astros. It would be McCarthy’s last appearance in a Dodger uniform.

2018 Status: Traded to the Atlanta Braves in the Charlie Culberson deal, causing a major hit to the Dodgers’ Twitter game.

Sarah Wexler is a native Angeleno and longtime Dodger fan. She began blogging about baseball in 2012 on her Tumblr, New Grass On The Field, where she covered an array of topics but especially enjoyed exploring baseball history. She is now a reporter/producer for MLB.com. She earned her master's degree in Sports Management from Cal State Long Beach. She graduated from New York University in 2014 with a bachelor's in History and a minor in American Studies. She's an avid Springsteen fan, which is a big boost to her baseball writer cred.
@sarahwexler32
Previous 2018 Dodgers Top 100 Prospects: No. 75-51
Next 2017 Dodgers In Review: 2B Chase Utley