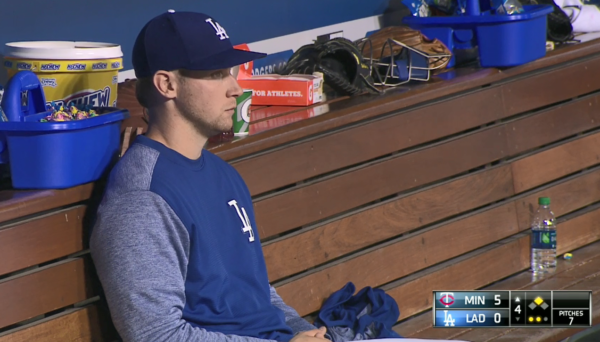 Entering the 2018 season, the top six spots on the Dodger starting pitcher depth chart are well-established. However, the pitchers in the next tier down are more nebulous, as Dustin outlined last month. One resident of that zone is Brock Stewart, who had a very up and down 2017 season. Stewart will probably miss the Opening Day roster, and one cause will be the insane splits he had last season (in pretty small samples):

Particularly alarming were the issues Stewart dealt with as his starts progressed. Most starters get worse the longer they go into an outing, but that effect was particularly pronounced with Stewart last year. He faced 31 batters in his second time through the lineup, walked seven of them, struck out three, and allowed a .320/.452/.542 batting line. In the second trip through the order, Stewart had a 10.13 ERA, which was matched by a 7.85 FIP. Any analysis of Stewart’s 2017 season should mention that he missed a good chunk of time with shoulder problems, and even after his return it is possible that it could have been effecting his longevity in outings. This may have also impacted pitch selection to some degree, which could impact the rest of what is mentioned in this article. Still, Stewart made his name by controlling the strike zone well, and to see that stop as games progressed was a concern.

Regardless of the sample size, Stewart’s huge starter/reliever splits last season highlights the unusual path he is trying to follow as a starting pitcher. Stewart uses a very weird pitch mix, one which became even more unusual in his abbreviated major league stint last season: 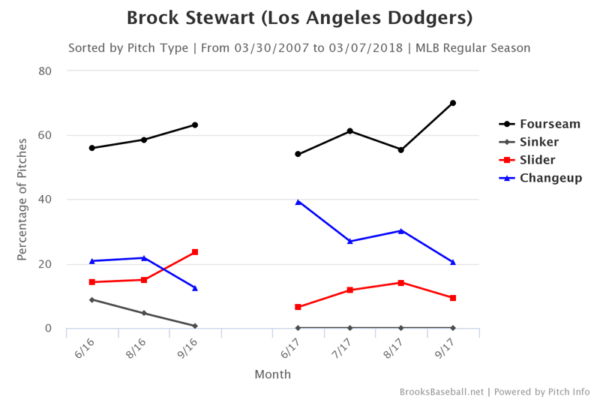 Stewart eliminated his sinker entirely, while replacing some sliders with more changes. While Stewart didn’t start very much last season, it can be interesting to compare his pitch usage to more established starting pitchers to see how prevalent that profile is. In 2017, 125 starters threw at least 100 innings. Below are those pitchers ordered by combined four-seam and changeup usage (with a minimum of 10% for each pitch):

Estrada is right-handed, but seven of the ten pitchers on this list are lefties, helped out by the traditional use of changeups: to get opposite-handed batters out. The right-handed pitchers on this list are all unusual because they lean on same-sided changes to some extent. If you want to compare Stewart’s numbers to the above table, as a starter in 2017 he threw 87.6% combined four-seam fastballs and changeups. He would have been at the top of this table by a considerable margin. Even in 2016, Stewart’s combined use between the two pitches was 81.7%, which still would have ranked extremely high despite the larger sample size.

Estrada emerges as the only real comparable pitcher here, which isn’t necessarily bad news for Stewart. Estrada was pretty bad in 2017, but over the course of his career he has a league-average ERA in 1000 innings, though Estrada mixes in a curveball and Stewart does not. Still, as a fundamental comparable, Estrada is not a bad ceiling for an aspiring pitcher.

However, the two pitchers vary in some pretty fundamental ways, as the table below outlines:

Estrada doesn’t throw as hard as Stewart, and the results show on the big difference in fastball whiff rate, where Stewart has a significant edge. However, Estrada’s changeup is much slower than Stewart’s and has some of the highest velocity separation in baseball. Among the 63 pitchers who threw 100 innings with at least 10% four-seam fastballs and 10% changeups, Estrada’s velocity difference between the pitches was second-highest behind old friend Jharel Cotton. Obviously that separation might not mean much given the recent success of the other pitchers it’s being compared to, but it does get into another big area of change (ha) for Stewart last season.

In 2016, Stewart’s average changeup was 12.5 MPH slower than his average four-seam fastball. In 2017, the velocity separation dropped to 10.5 MPH, which is still high but is not a near-league leading number like Estrada’s. The separation narrowed because while Stewart’s average fastball velocity dropped a little bit, his change sped up by about 1.5 MPH. The result of this was a pretty significant drop in changeup whiffs from 2016, which strangely corresponded with an increase in fastball whiffs. When you look at the pitch usage graph above, you can see that Stewart perhaps starting pitching more to this trend by the end of the season. Even so, the movement of whiffs from a pitch Stewart throws late in counts to one he throws early in the count is a concern, even if it hasn’t necessarily correspond with a drop in strikeout rate just yet.

Despite the rough 2017 campaign, there are a few pieces of good news for Stewart. First is that there is clearly still a role for him in the starting rotation if he pitches well in (presumably) Oklahoma City, so he still has time to prove himself. Additionally, if all else fails, a profile like his is much more common in relief. As established above, only one MLB right-handed pitcher threw more than 80% four-seamers and changes combined last year, with a minimum of 10% for each pitch. However, there were ten right-handed relievers (minimum 40 innings pitched) who fit that profile last season. There are some pretty good names in there too: Tommy Kahnle, Kelvin Herrera, Brad Brach, and Trevor Rosenthal, among others.

This combination is much more prevalent in relief partially because it’s a lot easier to control platoon usage. Stewart has struck out left-handed batters more often than right-handed batters in each of his first two MLB seasons. Stewart had one of the lowest rates of slider/cutter usage by right-handed pitchers to right-handed hitters last season, so he had to depend on same-side changeups to get them out. This pitch profile can be difficult to manage for a right-handed starting pitcher, since it’s a lot more difficult to control which batters he will face. In relief, that can be controlled more often, assuming that Stewart can control the nasty walk habit he had against left-handed batters in 2017. In that way, Stewart can support the left-handed pitchers already in the Dodgers bullpen and provides a different look from the much more common fastball/slider reliever of 2018.

In some ways, this is a very good scenario for Stewart, except for the “won’t make the Opening Day roster” part. His success as a major-league starter will probably depend on if he can resume mixing in the slider to right-handed batters (it’s pretty good when he throws it!), and Oklahoma City is a decent place to work on that. The Dodgers’ reduced depth has given him another chance to work out as a starter which he may not have otherwise had. If he can’t gain confidence int the slider or if the results on the change don’t improve, he has another path forward, one which has created some very good relief pitchers to date. With Tom Koehler‘s likely long-term injury, that path might prove important in 2018 as well.

Daniel Brim grew up in the Los Angeles area but doesn't live there anymore. He still watches the Dodgers and writes about them sometimes.
@danielbrim
Previous Logan Forsythe’s potential for a 2018 resurgence
Next Jake Peter is a thing, apparently