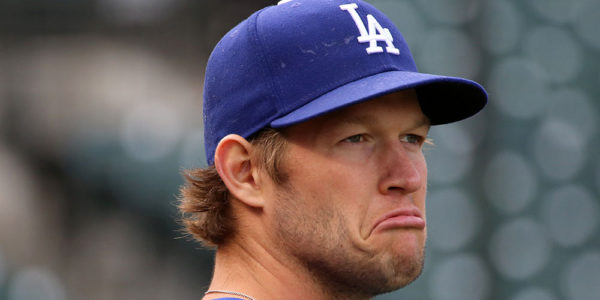 Losing Clayton Kershaw starts still really stinks. Tonight wasn’t really any different, but the results (a 6-1 loss) were not really his fault.

Kershaw’s pitching looked … fine, mostly. He looked almost exactly like he looked in the middle of last season. After much concern about his fastball velocity in his first outing, he was consistently between 91 and 93 today with reasonably good command of the pitch tonight. His curveball was extremely good, and his slider was flat and looked more like a cutter, which resulted in some difficulty putting batters away. He still seemed to be dealing with a follow-through issue, as he slipped a few times while finishing his pitches. I don’t really know what this issue actually means for Kershaw’s health or effectiveness, but it has appeared in two straight starts now.

Unlike his opening day start, Kershaw never really had to pitch in traffic, but the callbacks to last season were in more than the shape of his pitches. In the second inning tonight, Kershaw threw a very fat fastball to Daniel Descalso, who deposited it behind the pool in right-center field. In the fourth, he left a slider up and in to David Peralta, who turned on it and hit it out.  All three homers Kershaw has allowed this season have been hit by left-handed batters. In 2016, Kershaw allowed zero homers to left-handed batters. In 2014, he allowed one. In 2013, he allowed two. That’s as many homers hit by left-handed batters in 2018 as he allowed in those three seasons combined. Kershaw only allowed three more baserunners today (two singles and a walk) in his six innings of work, but some nagging concerns are still following him.

Following Kershaw’s departure, Scott Alexander came in and commenced an awful showing by the bullpen. He began his night by allowing two straight singles, then walked the pinch-hitting pitcher Jorge de la Rosa, who was trying to bunt. Alexander then struck out Peralta to put an inning-ending double play within reach, but he walked Ketel Marte after an 11-pitch battle to force in a run. Paul Goldschmidt specialist Pedro Baez was brought in to face Paul Goldschmidt, but he walked him to force in another run. Then he walked A.J. Pollock to force in yet another run. Baez then stopped the bleeding after three consecutive Dodger-issued bases loaded walks (a rare feat), but that was just about enough to put the game out of reach. At least that softened the blow of Zach Neal allowing a dinger in his Dodger debut.

On offense, the Dodger bats were making plenty of solid contact against Diamondbacks starter Zack Godley, particularly in the early innings. However, they didn’t really have the results to back that up. They brought home their only run in the third inning after an Austin Barnes double down the line, a Kershaw bunt, and a Chris Taylor sacrifice fly. However, even in that inning, some bad luck haunted them. Taylor’s sacrifice fly traveled almost 400 feet to the triangular cutout in right-center field and looked gone off the bat. Later in the inning, Puig hit a screaming line drive with Seager on first, but that too found a glove. That’s not to say that all of the Dodgers’ results were bad luck – they hit a bunch of grounders tonight – but on a more fortunate night this recap would have looked a lot different (at least until the bullpen imploded). Overall, Godley pitched seven innings, struck out three, walked one, and allowed one run on four hits.

Daniel Brim grew up in the Los Angeles area but doesn't live there anymore. He still watches the Dodgers and writes about them sometimes.
@danielbrim
Previous Dodgers @ Diamondbacks April 3, 2018: Kershaw vs. Godley; Let the best curveball win
Next Dodgers @ D’backs April 4, 2018: Don’t get swept