Dodgers 13, Padres 4 : Seager, Muncy lead the Dodgers to a sweep 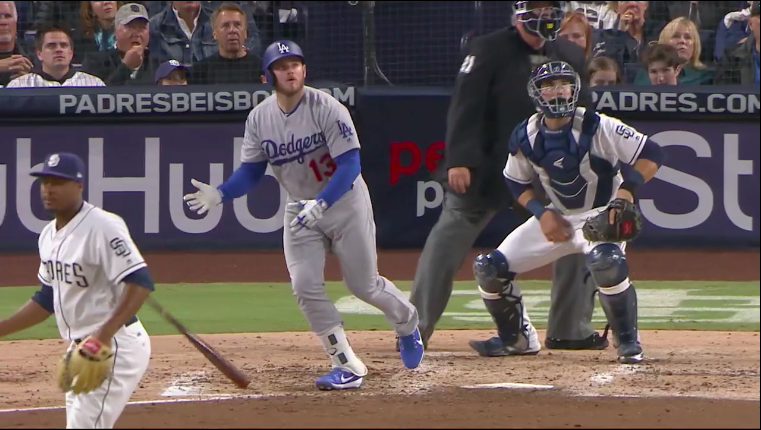 The Dodgers earned their first series sweep of the season with a 13-4 win in San Diego. The offense continued to do damage and made life easy for the pitching. Their 13 runs was a season high, and every starting position player got a hit and scored a run.

The Dodgers jumped on Padre starter Luis Perdomo early and often. In the first, Corey Seager drew a walk and Yasmani Grandal laced a single to right to put runners on the corners. The next two hitters, Cody Bellinger and Matt Kemp, each hit RBI singles on the first pitch of their plate appearances. Bellinger stroked a clean single to center, and Kemp followed it with a swinging bunt to third. Christian Villanueva hurried a throw to first and threw wide, which allowed two more runs to score.

The Dodgers struck again in the second after Max Muncy led off with a walk. He was bunted over to second, and Seager drilled a two-out single to left to score Muncy.

Perdomo got knocked around in the third. Bellinger led off with a double, and Kemp and Joc Pederson followed with singles. Chase Utley drove a two-run double to left-center to make it 7-2, and Muncy hit his first home run as a Dodger to break it open.

Perdomo finished the third, but was relieved by Tyler Webb to start the fourth. Perdomo allowed 10 hits, seven earned runs and two walks in his three innings.

Webb sat the Dodgers down in order in the fourth and fifth innings, giving the Padres some much-needed length. Seager drilled a one-out double in the sixth for his third hit of the night. Someone named Chad, who I believe writes for The Athletic, wrote a piece on Seager’s unlucky start to the season. Seems like he’s a decently smart writer.

The Dodgers were held quiet until the eighth. Adam Cimber allowed a single to Chris Taylor and a double to Grandal for the Dodgers 10th run.

They should keep doing this, IMO.

Craig Stammen came in for the ninth and allowed back-to-back singles to start it off. Yasiel Puig drilled an RBI single, and Seager knocked a two-run double to make it 13-4 and complete the scoring.

Kenta Maeda got the start for the Dodgers on normal rest. He struck out two in a 1-2-3 first inning, but wasn’t exactly sharp the entire game.

Villanueva led off the second with a single and Maeda got a pop-up for the first out. He allowed two more singles to load the bases and walked Austin Hedges to give the Padres a run.

Maeda was wild in the inning, but that wasn’t even a borderline ball. Perdomo followed the walk with a sac fly to left for a second run, but Maeda got Jose Pirela to ground out to end the threat.

After the Dodgers’ offensive onslaught in the third, Maeda failed to throw a #ShutdownInning. He allowed a one-out single and a walk, but after getting the second out, Carlos Asuaje knocked a two-run double. Maeda allowed a weakly-hit infield single to Cory Spangenberg, but struck Hedges out to end the inning.

Maeda settled in and threw a 1-2-3 fourth inning. He worked around a hit batter to strike out the side in the fifth. After a 10th strikeout to start the sixth, Maeda allowed two singles before getting a fly-out to end his night after 5 2/3 innings.

Maeda finished the night with 106 pitches, the second-most he’s ever thrown in a Major League start. He struck out 10 batters for the second time this season and only the third time in his career.

Adam Liberatore was tossed into the fire after being called up today. He inherited Maeda’s two baserunners in the sixth, but struck out Franchy Cordero to end the inning. Liberatore walked Eric Hosmer to lead off the seventh, but tossed a scoreless inning.

JT Chargois tossed a 1-2-3 eighth inning. Wilmer Font then got the ninth inning, finally appearing in a normal non-last-reliever-out-of-the-bullpen-in-the-15th-inning outing. Font got three groundouts to end the game.

With the sweep, the Dodgers move to 8-9 on the season, which was their record through 17 games last season. They outscored the Padres 30-10 in the series. Sure, it’s the Padres, but this is what good teams are supposed to do. They face a real test following their off day tomorrow, as the Washington Nationals come to LA for a three-game weekend series. They’ll face the two-headed monster of Max Scherzer and Stephen Strasburg on Friday and Saturday, so it’ll be a really good test for the Dodger offense.

I've been writing about the Dodgers since I graduated from Long Beach State, where I covered the Dirtbags in my senior year. I'm either very good or very bad at puns.
@@ac3581
Previous Dodgers @ Padres April 18, 2018: Maeda for the sweep
Next Tony Cingrani has been really good