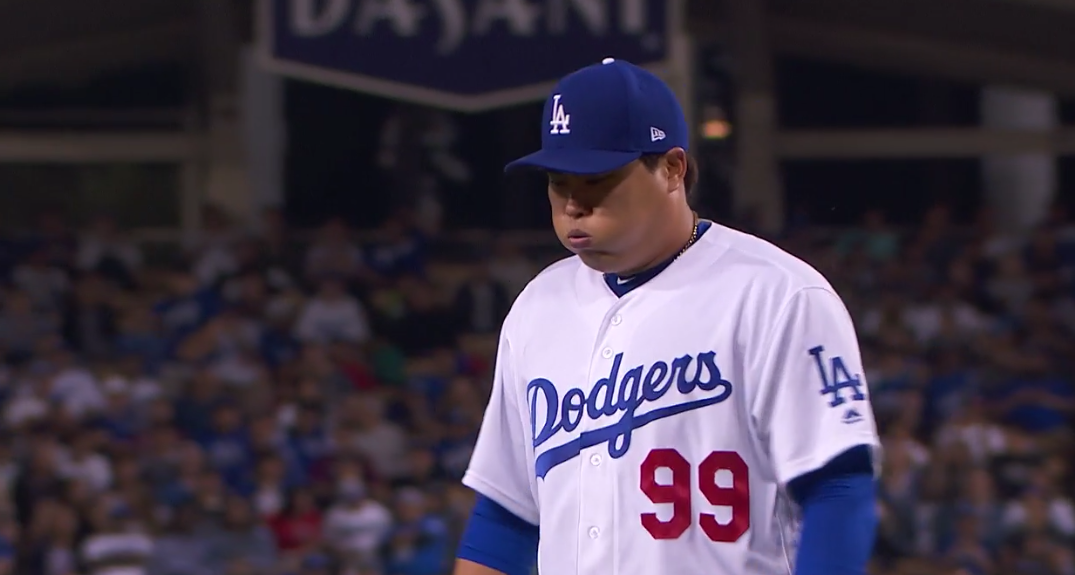 Yesterday’s loss felt demoralizing because of the Stephen Strasburg and Hyun-Jin Ryu matchup today seemed like a mismatch on paper, but thankfully that’s why they play the game. Strasburg was as advertised, but three homers and a dominant Ryu led the Dodgers to a 4-0 victory over the Nationals.

A day after getting Max Scherzer, facing Stephen Strasburg is no treat, and he was perfect through the first three innings against the Dodgers lineup … well, except for this Joc Pederson dong.

That gave the Dodgers an early 1-0 lead in the 2nd. Still, the bats generally remained silent until the 6th, when they loaded the bases with nobody out behind a Chris Taylor single, Corey Seager walk, and Yasmani Grandal hit-by-pitch. Unfortunately, Cody Bellinger, Joc, and Matt Kemp followed by striking out to end the threat and any hope of insurance.

Thankfully, the Dodgers sent Ryu on the mound, who has been nothing short of dominant since his first start of the season. While he had to escape from a bases loaded situation in the 3rd, he followed that with four consecutive 1-2-3 inning, and the Nats otherwise did not advance a runner into scoring position.

After the embarrassment that was the 6th for the bats, Enrique Hernandez redeemed them at least a bit with a two-out solo dong to left to double the lead to 2-0 after 7.

Tony Cingrani then came out of the bullpen as the setup man, and he continued to show why, by looking dominant in a 1-2-3 innings with two strikeouts.

It's kind of amazing the Reds never suggested to Tony Cingrani at any point, "Hey … maybe don't throw 95% fastballs?"

The offense then acquired further breathing room in 8th, as after a one-out Grandal walk, Bellinger redeemed himself by absolutely launching a two-run bomb to right to make it 4-0.

The 9th brought on Kenley Jansen, which is what everybody has understandably been talking about. Facing the heart of the order, Jansen unleashed nasty cutters from 92-94 mph and two-seamers at 95-96 mph. After getting two weakly-hit outs, he did walk a batter thanks to a questionable call that could’ve resulted in a strikeout, but he rebounded with a strikeout to end it and secure the win.