JT Chargois and his unique fastball

April is probably the most difficult month for baseball writing. There are all sorts of statistically interesting things, but almost none of it will stick around. Finding topics to write about is really difficult. However, sometimes, all it takes is one pitch to raise interest. Last week, such a pitch was thrown:

That is JT Chargois‘ fastball. So far this season it is averaging about 94 mph, a bit down from his days with the Twins. However, how often do you see a pitcher back-door a non-cutting fastball for a strike like that? That’s one of the nastiest pitches we’ve seen a Dodger throw this year.

PitchInfo classifies the pitch as a four-seam fastball. Some reports have it as a sinker. Whatever it is, it’s really good. For the sake of comparison, let’s look at that pitch next to all other pitches classified as four-seam fastballs thrown this year. As of Sunday morning, 336 pitchers had thrown at least 25 four-seams this season. This is how Chargois’ fastball movement stacks up with all of them (data via Baseball Prospectus/PitchInfo): 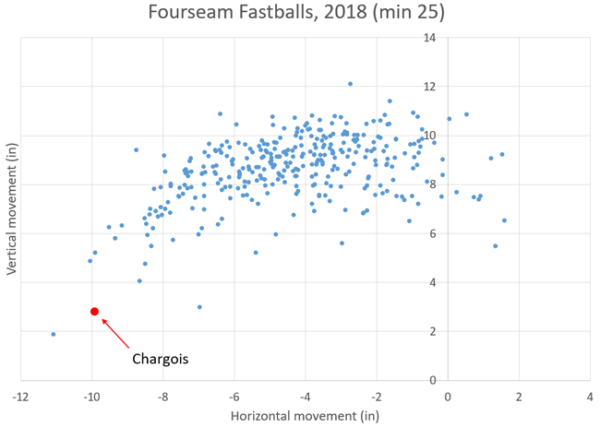 Chargois’ four-seam fastball has the third-highest run and the second-lowest rise of any pitch in the group. This is due to his arm slot, which you can see in the above GIF. On a four-seam fastball movement chart like the one above, if you trace a line between the movement point and (0,0), it can be a good approximation of arm angle. This is because the spin is almost all backspin relative to the release point. Clayton Kershaw has the highest vertical arm angle on this plot, while JT Chargois is the second-lowest: 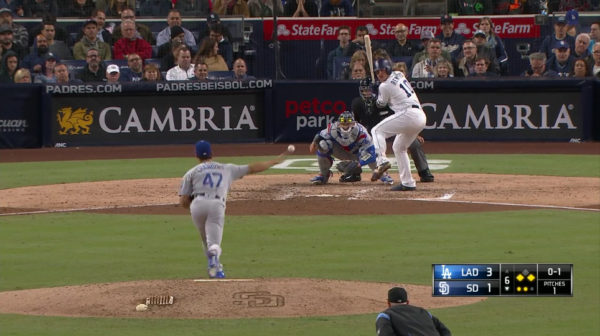 Chargois’ point on the movement plot more or less matches his arm angle, which is why it is classified as a fourseam fastball. Whatever it is, if he can freeze right-handed batters on the outside corner, he can also do this if he throws it inside:

Low arm slots like this can give right-handed batters fits, but the tradeoff is generally larger platoon splits. Brandon League was a very extreme example of this; his low arm slot allowed his sinker to break right into left-handed batters’ swing planes and they picked up the ball out of his hand very quickly. The Dodgers seem to recognize the potential platoon issues, only allowing Chargois to face six left-handed batters to 19 right-handed batters so far this year. With Tony Cingrani looking like one of the best left-handed relievers in baseball right now, this looks like it could be a sustainable use pattern. It would certainly help if Scott Alexander could start finding the strike zone, though.

The other issue with Chargois is that his off-speed command has looked pretty spotty. In 2018 he has thrown more sliders than fastballs, and you can see the potential location issues pretty clearly on this chart from Baseball Savant: 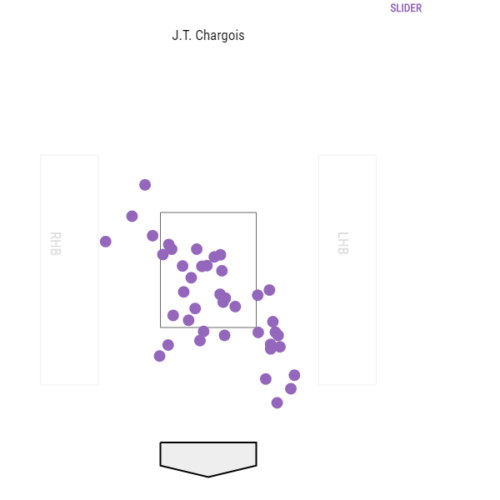 There are some unhittable pitches in there, but there are far too many elevated over the middle of the plate. So far this season, Chargois has limited the damage on those fat pitches, but at some point batters will start swinging at them. Perhaps throwing more of that insane-looking fastball will keep hitters more off-balance.

Before the season, Chargois talked with Stacie about finally being healthy, and so far the Dodger reliever is looking every part of that. His raw stuff looks incredible, but there are some legitimate questions on how much success he can sustain going forward. Even if he just ends up as a ROOGY, the Dodgers’ bullpen construction should be able to make that work. For a player picked up for free, that’s about all you can ask for.

Daniel Brim grew up in the Los Angeles area but doesn't live there anymore. He still watches the Dodgers and writes about them sometimes.
@danielbrim
Previous Dodgers 4, Nationals 3: A completed comeback finally gets Dodgers to .500
Next Podcast: ‘Dugout Blues’ episode 229 – Ryu’s back, Grandal good, prospects