Dodgers 4, Nationals 3: A completed comeback finally gets Dodgers to .500 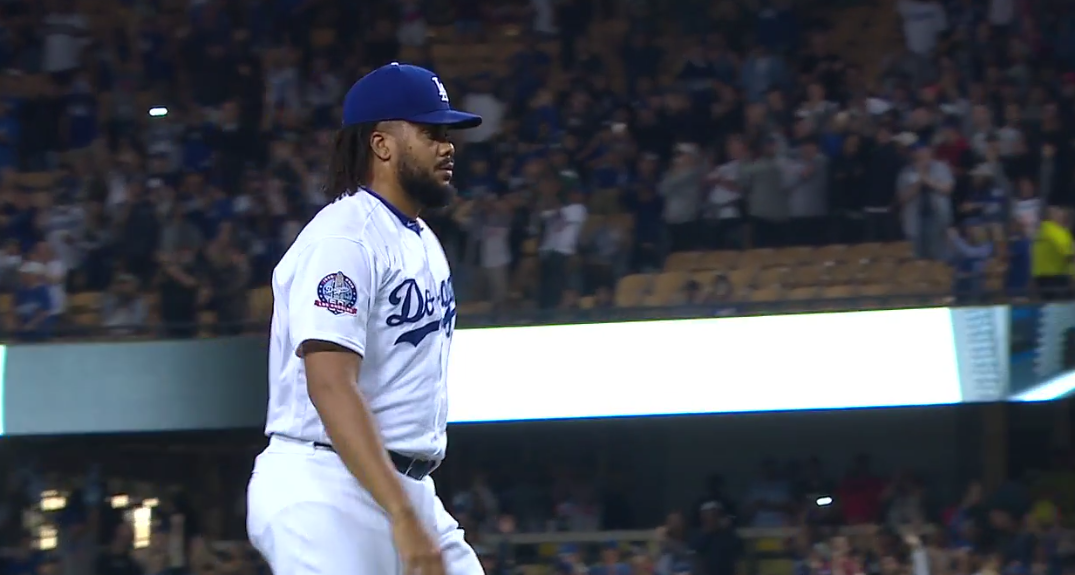 The Dodgers continued their quest to get back to .500 today against the Nationals, and things looked grim for a while, but the bats rallied late in a 4-3 win.

Alex Wood now lives at 88-90 mph with his sinker, so it’s important that not only he throws strikes but that he throws quality strikes. Today he was solid but not at his sharpest, giving up a no-doubt home run in the 4th to Michael Taylor, and also surrendering runs on sacrifice flies in the 2nd and 6th innings.

Wood allowed six hits and a walk, striking out four in the 96 pitches he threw over six innings. Wood surrendered three runs, with only two earned because of his own throwing error on a pick-off attempt that led to a sac fly.

On the other side of things, it was … grim. While Jeremy Hellickson doesn’t exactly strike fear in the hearts of hitters, following a Corey Seager double and Cody Bellinger walk in the 1st, he then retired 14 straight to mute the bats. Thankfully, the Dodgers had my pessimism on their side.

I guess these are back. pic.twitter.com/tKHaPImN0J

With one out in the 6th, Chris Taylor doubled and Seager walked. Yasmani Grandal stepped up seemingly hunting a curve and finally got one in the zone, he punished it down the line for a two-run double to cut the lead to 3-2.

That got into the Nats pen, and Bellinger greeted them by smashing a game-tying double off the wall and contributing a cool slide as well.

Enrique Hernandez followed with a walk, and both advanced after a wild pitch. Unfortunately, the Dodgers wasted the chance thanks to back-to-back strikeouts from Yasiel Puig and Chase Utley.

That brought on Josh Fields for the 7th, who immediately got in trouble with a four-pitch walk. He then allowed a single to Andrew Stevenson to move a runner to third, but Stevenson was caught at second after throw by Puig was cut-off by Seager. That proved key, as Fields then rebounded to strike out the next two hitters and escape damage.

The Dodgers managed to take the lead in the 8th, as with one down Austin Barnes was hit with a pitch and runners were on the corners soon after thanks to Taylor single to right. Seager then hit the first pitch to deep left, resulting in the go-ahead sacrifice fly, making things 4-3.

That got the Dodgers to the 8th, where things got weird. Tony Cingrani, pitching for his second time in five days, entered and struck out Bryce Harper. Cingrani has by far been the best reliever on the team … so of course he got removed for Pedro Baez. Immediately after, Ryan Zimmerman hit a fly ball to the warning track and Baez walked Taylor, who then got a steal of second because Seager took a throw from Grandal two feet in front of the bag and couldn’t make the tag. Thankfully, Baez escaped without any damage … but why was all that necessary?

Kenley Jansen was of course tasked with the 9th, this time protecting a one-run lead. Things did not get off to a good start, as Matt Adams (go away) singled on a flat 92 mph cutter and then Wilmer Difo singled as well off a hung slider. Thankfully, Kenley rebounded to strike out the next two batters and then got a fly out to center to secure the win.

Early on he was 91-92 mph with the cutter, but after he got into trouble he was consistently 93-94 mph and touching 95 mph. It’s definitely better.

The win secured a series victory over the Nationals and gets the Dodgers to 10-10 overall and 6-6 at home.

They get at it again tomorrow night against the visiting Marlins at 4:10 PM HST/7:10 PST/10:10 EST. Walker Buehler will be making his first career start in place of the injured Rich Hill, and he’ll be facing off against Jarlin Garcia.