The Dodgers are getting some regulars extra rest in today’s game against the red hot lefty Corbin. Three left-handed hitters in Max Muncy, Yasmani Grandal, and Joc Pederson all get the day off, and are replaced by their right-handed counterparts Kyle Farmer, Austin Barnes, and Tim Locastro.

This is the full roster shuffle:

Here’s how the two starters match up against each other out of 90 starters with at least 30 IP: 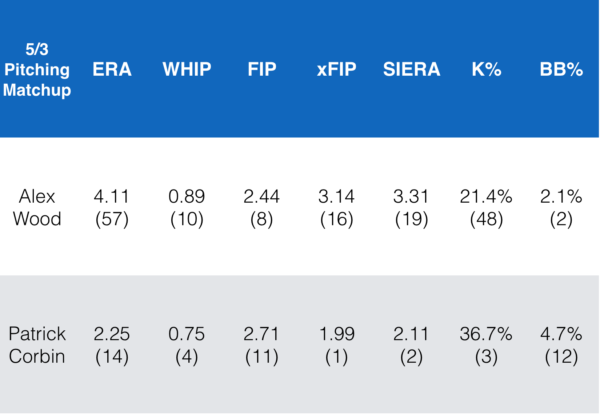 Wood hasn’t been the same pitcher as he was last year, yet a lot of advanced stats still really like him. The reduced velocity is resulting in less strikeouts overall, but limiting walks like he’s been doing this year is an extremely effective way to limit potential damage. He’s allowed six runs over his last 12 innings, so look for him to bounce back in a big way against a strong Diamondbacks offense. Corbin on the other hand has been unreal. He’s coming off his worst start of the year where he allowed two homers and three runs to the Nationals. Corbin allowed just two baserunners while striking out 12 over 7.1 innings last time he faced the Dodgers. He’s been throwing the slider more than ever this year, and it’s working wonders for him. He’s been one of the best pitchers in baseball this year, and it’ll need a strong, disciplined performance by the offense to take him down. The Diamondbacks also get Steven Souza Jr. back from injury, and he’ll make his season debut today. 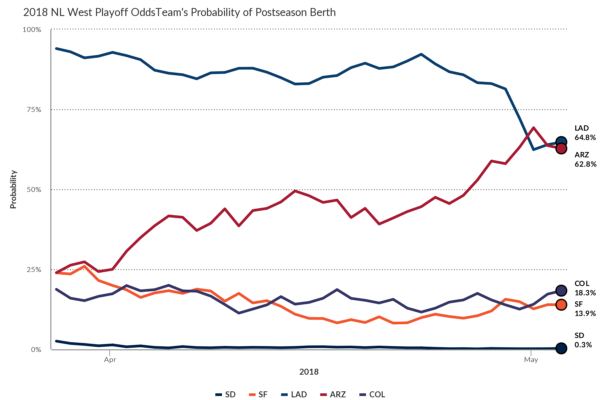 Also, as of today according to the FanGraphs projections, the Dodgers and Diamondbacks are both projected at 88 wins, with the Dodgers odds at making the playoffs and winning the division slightly higher than the Diamondbacks. So they’ll likely lose today to spite me.

Hyun-Jin Ryu’s groin muscle tore off the bone. Dave Roberts described it as traumatic and “pretty dramatic.” So.

This sounds horrible. I was lucky enough to be watching the game with Nomar Garciaparra last night, who dealt with numerous groin injuries throughout his career. As soon as he saw Hyun-Jin Ryu stretching out, he knew it was the groin and he wasn’t going to be able to stay in. The Dodgers best pitcher is now out until after the All-Star break, so let’s hope Walker Buehler makes a push for the NL ROTY as he’s most likely to fill in the void with Ryu out.

JP Hoornstra says Julio Urias was throwing from roughly 90 feet, so I think it’d be reasonable to hear a little bit more about how he’s progressing in the near future.

#Mariners outfielder Ichiro Suzuki is transitioning to the role of Special Assistant to the Chairman, effective today.

So ends an absolutely legendary career — 4367 hits across the MLB and NPB. One of the best to ever play the game, thanks for everything Ichiro Suzuki.

Just a guy living in Southern California, having a good time writing about baseball. Hated baseball practice as a kid, but writing about it rules. Thanks for reading!
@AllanYamashige
Previous Dodgers 2, Diamondbacks 1: Bullpen, Verdugo lead Dodgers to a win
Next Dodgers 5, D-backs 2: Offense gets wild pitch assists in late comeback