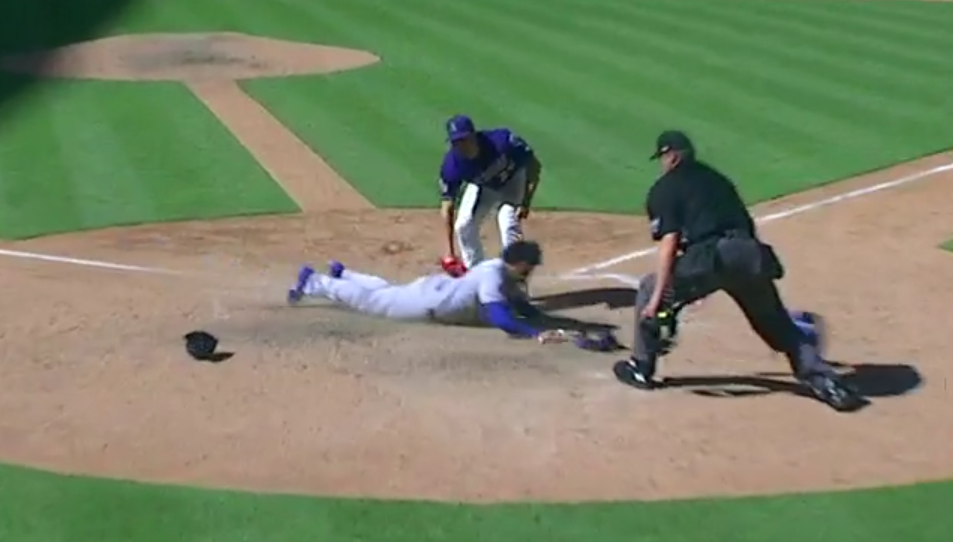 Oh wow, the Dodgers somehow managed to end the Diamondbacks streak of consecutive series wins to start the season by coming back late in a 5-2 victory to get the split.

While the offense was faced with a tough task today in getting to Patrick Corbin, they actually struck first thanks to an Austin Barnes homer in the second to put them up 1-0.

Alex Wood pitched well, striking out eight and surrendering just four hits and two walks. However, he did throw 96 pitches in his five innings of one-run ball. That one run is likely something he’d like to have back as after having just a runner on first with two outs in the 2nd, he issued a walk and then allowed a single to the opposing pitcher for a run.

Wood lasting just five was a problem because an already terrible bullpen so far had a bunch of guys unavailable. So Yimi Garcia made his 2018 debut in the 6th and was promptly rewarded with an error by Kyle Farmer and a single to put him in trouble. He then got a line out, but Ketel Marte grounded a single to left to take a 2-1 lead on an unearned run.

Edward Paredes then entered to also made his 2018 debut, and he promptly hit a batter to load the bases with one out. However, he rebounded by getting a foul out and a deflected ground out to escape without damage. JT Chargois was tasked with the 7th, and he got a 1-2-3 inning with three ground outs, continuing to be the most effective option for the team.

The pen limiting the damage proved pivotal in the 8th as the Dodgers finally got the big inning they’ve been searching for. Chris Taylor walked to start, Chase Utley followed with a single, and Matt Kemp blooped a single of his own to load the bases with nobody out. Cody Bellinger then drilled a line drive to center that was caught but allowed CT3 to score and tie the game at 2-2.

Runners on first and second became runners on second and third after a balk, and following an intentional walk to Barnes, two runs scored on two wild pitches to make it 4-2. Farmer then came up with a lined single to left to give the Dodgers their fourth run of the inning to make it 5-2.

Ross Stripling was used as a setup man and it’s hard to argue with the choice. Thankfully, he got a 1-2-3 inning with two grounders and a strikeout. Kenley Jansen then entered in the 9th and got a 1-2-3 inning, somehow his first of the year. Still, it was disappointing as he only got one swinging strike and it was on a slider, so that’s something to watch.

The Dodgers will now head down to Mexico tomorrow for a series with the Padres that will start at 3:10 PM HST/6:10 PM PST/9:10 PM EST. Walker Buehler will take the mound and he’ll square off against Joey Lucchesi.