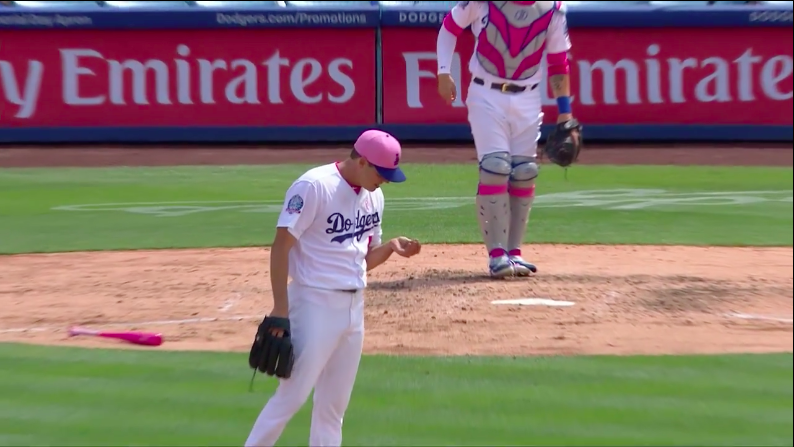 The Dodgers stayed with their 2018 theme, losing a game and having a pitcher removed with an injury. They were swept by the Cincinnati Reds, who entered the series with only 10 wins this season. They’ve lost seven of their last eight games since the combined no-hitter.

The Dodgers are now 16-24 through 40 games. Only once in Los Angeles Dodger history has a team had a worse record through 40 games (1958 Dodgers started 15-25) (H/T: True Blue LA for this stat). I knew this team would break records this year.

The offense went quietly through the first two innings, as a two-out single by Yasmani Grandal was all they had. Yasiel Puig finally broke through in the third with his first home run of the season.

Yasiel Puig's mom wants one thing from him on Mother's Day: a home run.

Luis Castillo retired the next nine batters before Tim Locastro reached on an error as a pinch hitter to lead off the sixth. In a shocking turn of events, Chase Utley grounded into a double play to erase that runner. Castillo finished the sixth inning by getting a flyout.

Yasmani Grandal led off the seventh with his sixth home run of the season. Cody Bellinger fell behind 0-2, but worked a full count and laced a single to chase Castillo from the game.

Austin Brice relieved Castillo and got Matt Kemp to hit a grounder, but Jose Peraza threw wide of second and Bellinger moved to third. Chris Taylor grounded out to score Bellinger, and the Reds went back to the bullpen.

Amir Garrett came in, so the Dodgers countered by bringing Enrique Hernandez in to bat for Max Muncy. Hernandez struck out, and Garrett got Puig to ground out to end the inning. Garrett followed that up by striking out the side in the eighth. Raisel Iglesias got the ninth and needed 18 pitches for a 1-2-3 inning.

Tyler Mahle, Matt Harvey, Homer Bailey and Castillo started games for the Reds in the series. Entering the series, Mahle had the best ERA of the bunch, at 4.35. The four pitchers combined to throw 20 innings and allowed only six earned runs. Not ideal.

Rich Hill began the game easily enough with a three-pitch strikeout. He followed that up by allowing a single and a pair of walks to load the bases with only one out. However, he struck out Adam Duvall and got Scott Schebler to strike out to end the threat.

Hill got two outs in the second inning rather easily, but Billy Hamilton caused some havoc on the basepaths. He reached on a bunt single and then stole second on a pickoff throw to first. He stole third, but was stranded when Jose Peraza grounded out to end the inning.

The Reds finally broke through in the third, which started with an error at first by Bellinger. Kemp made a great catch in left to rob Joey Votto of at least a double, but Eugenio Suarez hit a curve over the left field wall to make it 2-0. Hill followed that up by walking Duvall, and Schebler hit a grounder up the middle while Duvall was stealing. The ball got under Chris Taylor’s glove for another error, but Hill got a double play to limit the damage.

Hamilton blooped a one-out single in the fourth. He went to third on another single, and scored on an Alex Blandino squeeze bunt. Hill struck out Votto to end the inning, but it was wild to watch a team manufacture a run.

Hill allowed a single and a walk to start off the fifth. A groundout moved the runners both into scoring position, but Hill got a strikeout and a flyout to keep the Dodgers within two. Hill got two easy outs in the sixth, but was removed from the game after he and a trainer checked out his fingers. He missed time with a cracked fingernail earlier this season, so that is concerning.

Pat Venditte relieved Hill in the sixth and allowed a two-out single against a righty. Then, lefty-Venditte gave up two-run homer to Votto to make it 5-1.

Daniel Hudson came in for the seventh and allowed a two-out double, but got Castillo to end the inning. He remained in in the eighth and issued a four-pitch walk to Hamilton to lead off the inning, but worked around it for his second scoreless inning of the game.

Kenley Jansen got the ninth in his first game action since Wednesday. He tossed a 1-2-3 inning and got a swinging strikeout for the final out, which has become a bit of a rarity for him this season. So that was good to see.

The Dodgers have a day off tomorrow, which I think we all need. They’ll be on the east coast all with with a series in Miami before heading to Washington D.C. for a weekend series. The series against the Marlins seems winnable … but … yeah … Many people have called this the low point in the Dodgers’ season, but I don’t want to tempt fate by wondering if they can get much lower.

I've been writing about the Dodgers since I graduated from Long Beach State, where I covered the Dirtbags in my senior year. I'm either very good or very bad at puns.
@@ac3581
Previous Reds @ Dodgers May 13, 2018: Don’t get swept in front of the moms
Next 2018 MLB Draft: Dodgers’ Big Board, v 1.0