The Dodgers (16-25) look to bounce back after a disappointing loss in the series opener against the Marlins (15-26). They were only able to muster five hits overall, and their offense with RISP was terrible again, going 0-7 on the evening. Since April 29, the Dodgers are slashing .164/.279/.197 with runners in scoring position. Over that frame, their .164 batting average is above only the Diamondbacks, and their slugging percentage (.197), OPS (.476), and wRC+ (34) are all the lowest in the league. Yeah. If they’re not able to win tonight, they’ll be tied with the Marlins and Padres for the second worst record in the entire NL. Luckily, the Dodgers send their best pitcher in Walker Buehler (2-1, 1.64 ERA) against Marlins rookie, Elieser Hernandez, who is making his first MLB start.

In a sentence I couldn’t imagine myself saying in March, the Dodgers have Cody Bellinger starting in center field in order to get Max Muncy and his bat in the lineup. 2018, people. Anyways, Muncy has been pretty good and I recently wrote about him and how he’s stood out to me. I understand getting Muncy more appearances, but it’s interesting to see Enrique Hernandez miss yet another opportunity to start. Currently, Hernandez has a 101 wRC+ against RHP, and a 91 wRC+ against LHP, which goes against his noted “lefty-masher” title. Last year, Hernandez posted a 144 wRC+ against LHP, and a 36 against RHP, if he could just recreate his success against LHP he’d probably be playing everyday. Forsythe sits against the right-handed Hernandez after starting against the left-handed Chen last night. Forsythe is actually 0-18 against LHP this year, but last year and over the course of his career he has been much better against LHP. It’s all understandable, the Dodgers just honestly need to find a way to win a baseball game.

Out of 147 starters with at least 20 IP, Buehler has been impressive: 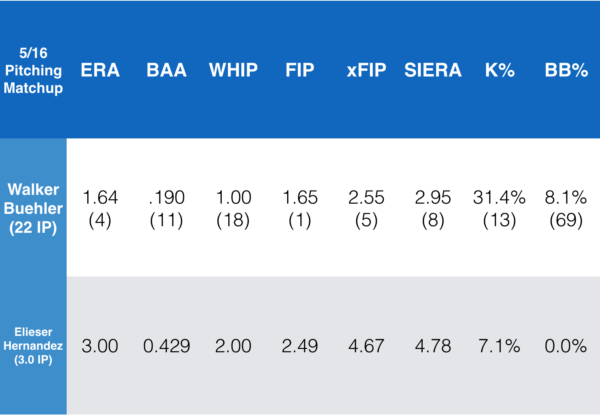 Unfortunately, the Marlins changed their announced starter a few hours before the game from Caleb Smith to Hernandez. Instead of a nice comparative chart between Buehler and Smith, who has been the Marlins best starter (and a top-40 overall starter), this is mainly a chart to showcase how good Buehler has been. Hernandez has pitched only three MLB innings this year, both out of the bullpen making his stats in this chart pretty much irrelevant. The 22-year-old right-hander is mainly a fastball-changeup guy, mixing in the rare slider. He sits 90-92 mph with the fastball, and doesn’t bode as a particularly difficult pitcher to face.

Buehler on the other hand has been pretty phenomenal. He rates as a top-15 starter by pretty much every aspect. The only thing holding him back has been his command, as he’s been pretty unhittable. In his last start he had his lowest average fastball velocity of the season (96.6 MPH), but that resulted in improved command — striking out eight while walking none. Only 16 starters average 96 MPH+ on their fastballs, so if he had to dial it back a tick or two for increased command, that’s a tradeoff he can afford to make. Buehler currently has the sixth lowest fly-ball rate at 23.5%, and the 12th highest ground-ball rate (54.9%). It’s been a small sample size, but a lot of that has to do with the fact that of 77 combined sliders and curves Buehler has thrown, he is yet to allow a fly ball. In addition, only four of his 32 curves thrown have been put in play and every single one has resulted in a ground ball. These things will be interesting to monitor as he moves forward and his sample size increases, but Buehler has been one of the most effective pitchers in the league so far.

Missed this yesterday but @theteenager7 moving along in his recovery. pic.twitter.com/rJQ9IChZXO

Julio Urias is officially throwing off a mound, which is great news. I’d still call it unlikely at best that he pitches this season, but this makes it more of a possibility now. The Dodgers could use some bullpen help if he can’t build up the duration needed to go 80-100 pitches.

Dennis Santana is another option to add some firepower to a unimpressive Dodgers bullpen. He hasn’t pitched above AA, but if he performs well in OKC he could eventually be on his way to bolster the pen.

Rich Hill completed his bullpen session and he is scheduled to make his start on Saturday. The team expects to activate Tony Cingrani on Saturday, too.

Rich Hill always expects to make his next start, regardless of whatever is going on with his pitching hand that week. Hopefully Tony Cingrani is well rested, healthier, and able to perform like he did in 2017. The Dodgers bullpen needs someone to step up and be reliable. They need to find a way to win before facing Max Scherzer, Stephen Strasburg, and the Nationals this weekend.

Just a guy living in Southern California, having a good time writing about baseball. Hated baseball practice as a kid, but writing about it rules. Thanks for reading!
@AllanYamashige
Previous 2018 MLB Draft Profile: OF/1B Trevor Larnach, Oregon State University
Next Marlins 6, Dodgers 5: Just never quite enough