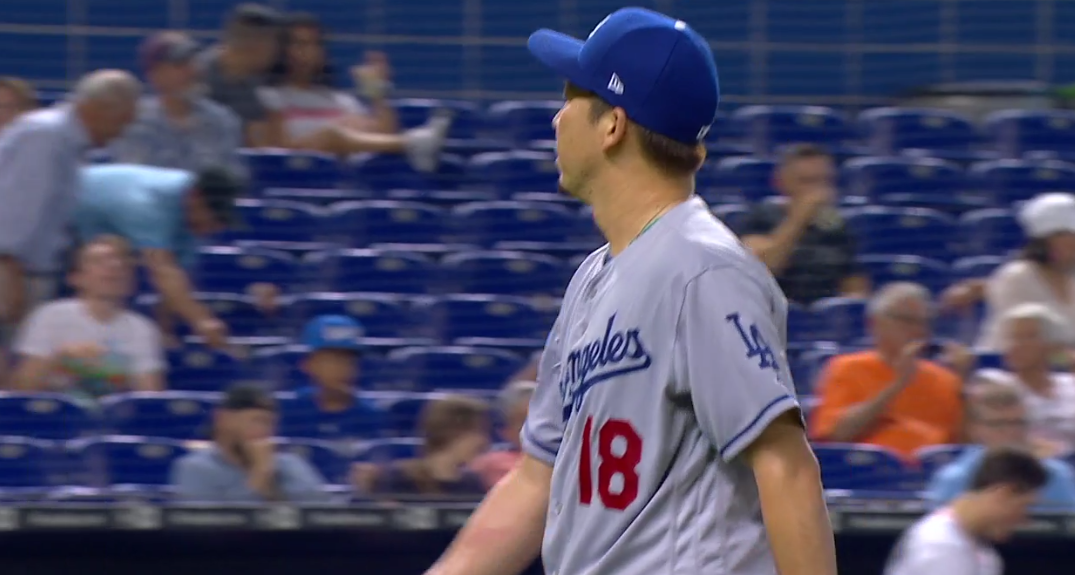 Losers of six in a row and nine of their last 10, the Dodgers were desperate for anything to go right for them. Thankfully, basically everything did for once today, as Kenta Maeda was stellar and the offense broke out against the Marlins’ best starter for an easy 7-0 victory.

Despite the Dodgers currently having basically three MLB-quality starters, with one of them being a rookie, calls for Maeda to be demoted to the pen haven’t abated. It’s quite confusing given that his peripherals are excellent even if he’s been giving up runs, and at least today’s performance should give pause to those wanting it.

Maeda went eight shutout frames, striking out eight and walking none, dominating the Marlins and limiting them to two hits. It was as impressive as any start he’s had in his career, and I’m curious to see where Maeda’s peripherals and performance converge this year.

Most importantly, the Dodgers actually cashed in on their chances today. After a quiet first two frames, they exploded in the 3rd with four runs.

Yasiel Puig started with a walk and was advanced on a sac bunt from Maeda. Chris Taylor and Austin Barnes then also walked to load the bases, and normally it would be around this point where the Dodgers shit the bed. However, it’s nice to have Justin Turner back, huh? All he did was rip a ball down the line for a bases clearing three-run double.

Matt Kemp then showed his strength by basically poking a ball over the center fielder for a ground-rule double and another run.

Shockingly, the Dodgers did it again in the 4th, putting up a three spot. Puig hit his third homer in four games by bombing one to left, so that’s a good sign.

Then with two outs they got a rally going behind a CT3 single and a Barnes walk. That was cashed in by, who else? JT on a double down the line in left.

Kenley Jansen got the 9th, and I honestly had forgotten he wasn’t on the DL or something cause I haven’t seen him pitch in so long. While he allowed a check swing infield single and a fliner single that fell in, he also struck out the side and threw a lot more cutters that looked like the regular him.

The Dodgers are now 17-26 on the season … which is, uh, better than yesterday.

Unfortunately, the Dodgers now head to Washington for a series against the Nationals that starts at 1:05 PM HST/4:05 PM PST/7:05 PM EST. The matchup? Um … well it’s Ross Stripling continuing to put in work for a depleted rotation up against whoever this Max Scherzer guy is or whatever.