Dodgers 5, Nationals 4: An actual comeback thanks to a Matt Kemp 2-run double in 9th 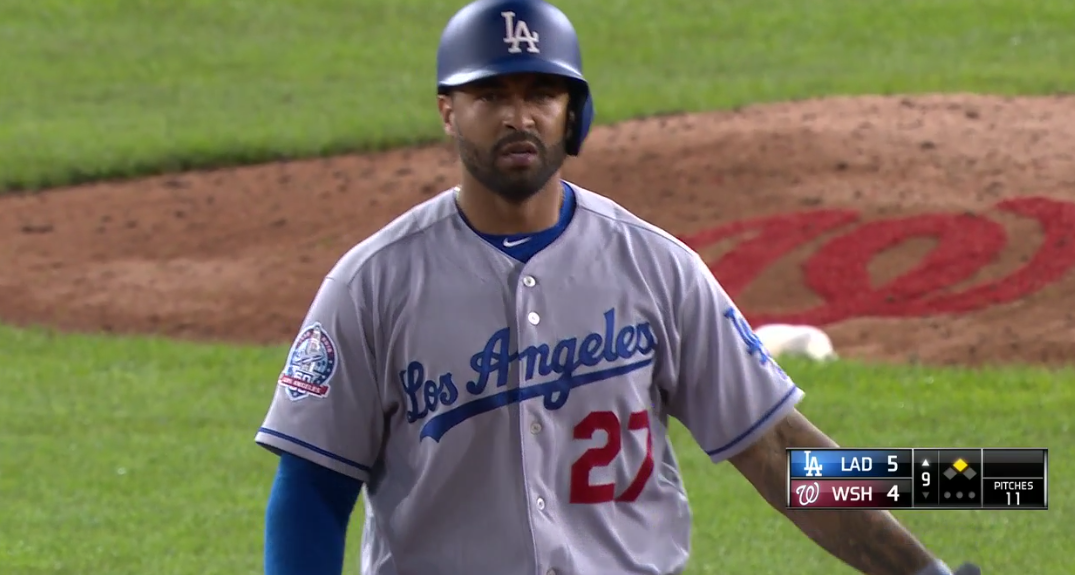 After taking the first game of the double header against the Nationals, the Dodgers had their season continue to go basically as poorly as possible after Rich Hill exited after just two pitches. However, to their credit, the Dodgers fought hard against Max Scherzer and then again to mount a comeback against Sean Doolittle late for a 5-4 victory.

Hill took the mound today looking to right the ship after a bunch of disastrous starts. Well, that didn’t go so well, as he was in distress after one pitch and was removed after two. The reason?

Surprisingly, the Dodgers bullpen was outstanding early, as Scott Alexander and Pedro Baez combined for four shutout innings, each allowing just a walk, with Alexander striking out four and Baez striking out one.

Meanwhile, Scherzer was on the mound so things were dire from the start, but the Dodgers scored quickly in the 1st. Joc Pederson started things with somewhat of a fluke double down the line in left and he was scored by a Max Muncy single for a 1-0 lead.

Then in the 5th the lead was extended to 2-0 with Muncy hitting a towering homer to right.

Unfortunately, the bullpen finally came undone in the 6th. After Yimi Garcia got a scoreless 5th inning, he allowed the first hit for the Nationals on a double. After getting an out, he was replaced by Tony Cingrani, who proceeded to hit a batter, induce a pop-up, allow a double for a run, and issued an intentional walk. That brought in Daniel Hudson, who promptly allowed a single to score two more runs and give the Nationals the lead, and another single made the score 4-2 before getting out of it. Hudson did rebound in the 7th at least, getting a 1-2-3 frame.

In the 8th, the Dodgers cut the lead in half thanks to a Cody Bellinger bomb to center.

They seemed primed to do a lot more than that after Chris Taylor tripled with one out, but pinch-hitter Justin Turner was intentionally walked and Yasiel Puig proceeded to ground into a double play to end the threat.

Erik Goeddel made his Dodgers debut in the 8th and he looked surprisingly impressive for somebody claimed off waivers. While he walked a batter, he got a relatively drama-free scoreless inning.

The Dodgers quickly threatened in the 9th again after Austin Barnes shot a single to right to start and Logan Forsythe blooped a ball in front of the center fielder. Pinch-hitter Matt Kemp immediately took advantage by roping a fastball down the line in left to score two and take a 5-4 lead. Let’s just ignore the fact that a decent relay would’ve seen Forsythe erased at home.

Kenley Jansen then tried for his second save in a literally hours, and while he still was less dominant than usual, he did just induce a routine fly ball, a nubber back to him, and then ended him with a very Kenley strikeout.

Can always count on Puig for entertainment.

The win helps the Dodgers to 19-26, which is at least getting there. They were underdogs today, but these are probably games they kinda have to pull out every now and then to get back into it.

The series ends with an early start tomorrow at 7:35 AM HST/10:35 AM PST/1:35 PM EST, with a deceivingly decent matchup in Alex Wood against Stephen Strasburg.